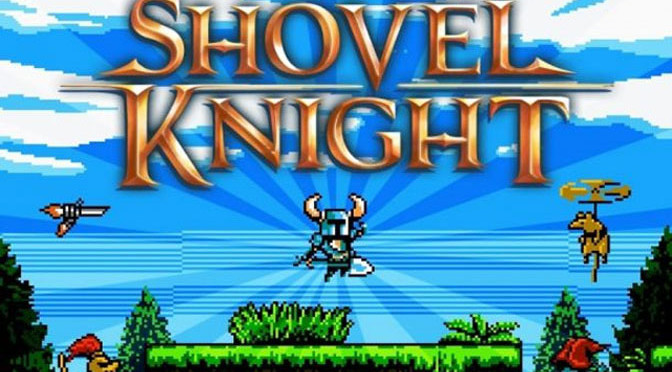 Shovel Knight is the platformer that old school game fans everywhere have been waiting for. The game pulls from many titles from the early days of gaming, such as Mega Man, Super Mario Bros. 3 and Castlevania, and puts it all together in one neat package.

Shovel Knight opens up with a cutscene that tells of the grand adventures of Shovel Knight and Shield Knight. The two warriors fought side by side and and journeyed to the Tower of Fate. While in the tower, the two were separated by a magical amulet and Shield Knight was lost. Shovel Knight retires to a life of solitude, but takes up his shovel once more to to fight off the eight knights from The Order of No Quarter that have taken over the land with the help of The Enchantress.

The story of Shovel Knight is great. The interactions between the Shovel Knight and the members of The Order of No Quarter are very entertaining to listen to and give players some insight into the history of the world.

Controls in Shovel Knight are perfect. It’s the best example out there of a game that can’t be blamed for when the player dies. Other games have cheap deaths or messed up hit boxes that can screw with the player, but not Shovel Knight. This is easily my favorite thing about the game.

I played Shovel Knight on the Wii U and I can’t imagine doing it any other way. My first instinct was to pick the game up for Steam, but I changed my mind because I wanted to use a good controller and I’ve been putting off replacing my wired Xbox 360 controller (Some of the buttons are starting to stick).

The Wii  U version of Shovel Knight has the item selection screen on the Gamepad. This makes it incredibly easy to switch between using different items without having to pause the game. In turn, this keeps the game moving and doesn’t interrupt the flow of play.

Shovel Knight on the Wii U also take advantage of the Gamepad controller in a very unique way. Along with acting as the game’s item selection menu, the Wii U Gamepad also acts as a direct link to Miiverse. For those who don’t know, Miiverse is Nintendo’s version of a forum with a dedicated section for each game. Having Miiverse easily accessible while playing the game makes it really easy to get involved with the community. It reminds me of when Nintendo was first advertising using Miiverse to talk and share information about games. Until now, I’d always viewed the process as a bit of a chore and haven’t taken advantage of it, but Shovel Knight just makes it so easy to do that I couldn’t help but participate.

Gameplay in Shovel Knight is filled with platforming and combat that requires players to really test their skills. As the title of the game makes clear, our hero wields a shovel as his weapon. This can be used to dig up gold, destroy items blocking a path and for bouncing off of enemies and other objects.

Bouncing off of enemies is easily one of the most interesting elements in the game. Some sections of the game actually require it to move forward. Bouncing with the shovel is also used to get through some difficult areas that have extra items or other rewards waiting at the end.

The shovel also plays a large part in combat. Players can use the shovel to smack enemies and deal damage to them. The shovel will also deal damage to most enemies when they are bounced on. This holds true for the knights of The Order of No Quarter and other bosses in the game.

Players can also collect Relics as they play though the game. Relics include items that are found in chests and bought from merchants. Most of these items can be used in combat and throughout levels to help players with their goals. The fact that most items in the game have more than one purpose is one of the best things about Shovel Knight. It also allows players to create unique strategies for getting through tough areas and defeating bosses.

Despite being an old side-scrolling game, Shovel knight has a fair amount of things to do. Item collectors will be pleased to know that the game has music pages hidden throughout its levels. These pages can be brought back to a bard in the main village and he will pay 500 gold for them. Giving the pages to the bard also allows players to listen to music from the game while in the village. This is a great reward as Shovel Knight has amazing music.

Other side quests in the game include upgrading Shovel Knight’s armor and weapon. There are three shovel upgrades to unlock. These include being able to do a charged attack, digging up gold in one go and shooting a beam along the ground when at full health. Armor upgrades give Shovel Knight completely new sets of armor. Each of these armors has a unique ability. My personal favorite was the silver armor. It allows players to perform a charge attack after bouncing off of something twice.

One element that really stuck out to me in Shovel Knight was the level design. The game does a great job at teaching players how to play the game without holding their hands or flat out telling them. It reminds me a lot of how the original Mega Man games would put players in an area where they were safe to show them how a new game mechanic worked, and then slowly ramp up the difficulty surrounding the introduced mechanic.

Shovel Knight isn’t so hard that the average player can’t get into it. My first play through of the game felt really easy and it left me wanting more challenge. I defeated many of the bosses on my first try and didn’t have to worry much about remembering their attack patterns. Luckily, players can choose to start a New Game + file after beating the game to turn up the difficulty.

New Game + allows players to bring all of their items, upgrades and gold over to a new game. The increased difficulty on a + file includes taking double damage, less checkpoints in levels and most healing items that can be found in levels being replaced with bombs. All of these elements come together to create a truly challenging experience for the player.

I completed my first play through of Shovel Knight with seven hours on the clock. This all happened in one sitting and I collected 86% of the items in the game. Without even taking a break, I started on my New Game + file. This is just how addicting and fun the game is in my opinion. Another four hours in and I’ve beat the harder difficulty of the game. This time around I passed on trying to collect lots of loot and instead went straight for the bosses. I was about to start my third time through the game to work on collecting missing music sheets when my wife finally told me to shut it off because she was getting burnt out of watching me play the game. For $15, I’m happy with my purchase.

The audio in Shovel Knight is absolutely amazing. The game is filled with new 8-bit sound effects and songs that feel like they could have came straight from the best Nintendo titles. I found myself humming along with the music from several stages in the game and many of them (namely the music from Propeller Knight’s stage) stuck with me after I shut the game off. Lucky for me, there is an original soundtrack and arranged soundtrack available for the game (This isn’t included with the purchase of Shovel Knight and must be bought separately).

The graphics in the game are top notch. Shovel Knight does more than emulate the 8-bit era, it honors it. Activity in the main village and the unique character designs really stick out in the game. Really detailed animations for simple and sometimes random events also go a long way to show that this game has heart. One such event has a woman in a bar breaking out into a detailed dance routine while all the other patrons cheer and clap for her. This isn’t something in the game that has to be seen, but the fact that it’s there is a perfect example of the level of detail in the game.

Overall, I loved my time with Shovel Knight. The gameplay, characters, graphics, audio and everything else in the game is amazing. This game stands as an example for other 8-bit throwbacks to aim to and shows what can happen when a Kickstarter campaign goes right.

Shovel Knight digs up 5 GiN Gems out of 5!