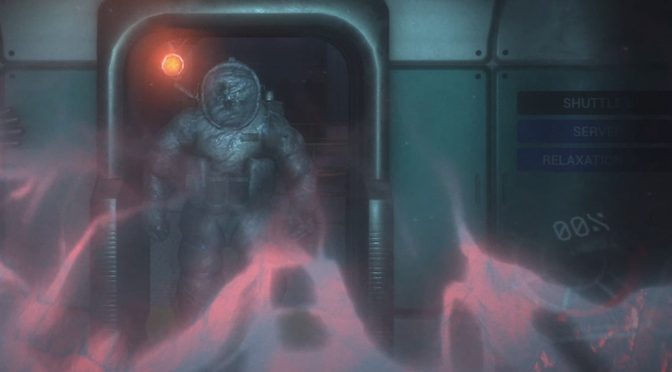 Deep sea diving is one of the most dangerous things someone can do; trapped in a metal suit with without a quick escape route to the surface, even the slightest miscalculation or error in judgement can be deadly. Still with the right amount of training and focus it isn’t inconceivable that one could eliminate the human error or at least keep it to a minimum. However, what if something happens that you couldn’t control, you did everything right but were just in the wrong place at the wrong time? This is the situation Narcosis places you in: adrift at the ocean floor in a metal suit running low on oxygen, trying to survive. 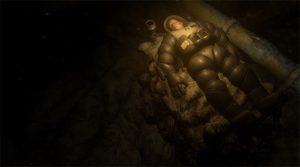 Narcosis begins you as a deep-sea diver looking to study the ocean floor when an underwater earthquake erupts tearing apart all forms of security around you. From there you must content with not only the slow oxygen reliant suit you’re trapped in but also the creatures and terrain of the ocean floor.

The story of Narcosis is one survival not only against the seemingly insurmountable odds but also against the slow degrading of one’s mind alone on the ocean floor.  Driven by the narration of an interview from the lone survivor of the incident there is a sense of inevitably that persists throughout as you push forward to survival. Including a truly surprising twist that actually enhances the story, Narcosis truly stands out as a journey that needs to be experience in full for understanding. The narration of  the game is solid, and while it isn’t abundant enough to truly stand out as special however it is strong enough to feel believable and fitting.

The core gameplay of Narcosis is simple, as the narrative takes center stage. What the game does well is truly let you feel what it’s like to be underwater alone without help in sight. The suit you inhabit has a booster for movement, a flare gun to create light and scare off creatures, and a knife that provides an almost nonexistent amount of self-defense as hit detection among some of the dangerous fish is less than ideal. 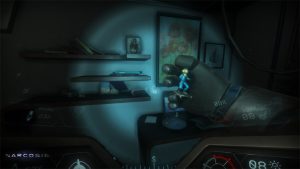 Movement feels properly weighted but not aggravatingly so, like the resistance of the ocean is a real element not an artificial road block. There is a slight puzzle solving element to this game, more akin to basic problem solving of finding objects and avoiding the patterns of dangerous fauna. The puzzles themselves are rarely ever the problem as much as the stress of your depleting oxygen and room for error in the game.

The horror element is more unsettling in nature than a classical terror, with the weight of the ocean floor and the encroaching madness attacking your psyche slowly throughout the experience. 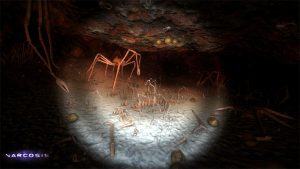 The art direction of the game somewhat hit or miss; graphics are none too noteworthy, but sound design overall is excellent. Character models are pretty basic and the creatures of the sea don’t all look great, namely the giant sea spiders which just kind of look out of place though they are somewhat terrifying with the horribly wonderful sounds of their scuttling. Environment design is actually pretty solid with one scene in particular that is markedly different from the rest of the game and quite stunning. The scares you see are more unsettling than immediately scary. 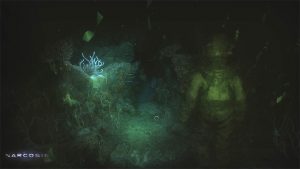 The soundtrack is sparse but solid, however, it is the sounds of the ocean and design of how you hear in the suit that is quite strong. Narcosis truly excels in making you feel like you too are stuck in the suit as the muffled noises of the world around are all the more unsettling.

To be trapped underwater hopeless of being saved by someone is truly a slow burning nightmare that Narcosis is able to encapsulate successfully. With a story whose ending is more than worth the experience, a great sound design, and an excellent execution of the atmospheric horror genre Narcosis is truly a game worth diving into.