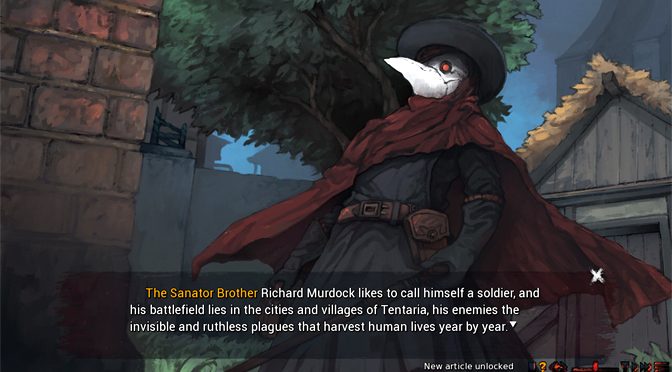 Storytelling is all the rage now with a lot of gamers, and for good reason. Being able to enjoy a good story in a book is pretty cool, but being able to actually participate and influence the plot is even better. As such, graphic novels and visual novels are very popular for PC gamers. On mobile platforms, even text adventures like Choose Your Own Adventure games are seeing a resurgence. Now if we could just get Infocom to start making text adventures again, but I digress.

Sanator: Scarlet Scarf is a visual novel where most of the narrative is delivered to players like a traditional book. Yes, there are choices, but compared to a game like, say, Arcade Spirits, which is all about choice, Scarlet Scarf is a little sparse. There are perhaps six or seven choices to make in the whole adventure, and only about four that actually matter in terms of changing where the plot goes. That is not necessarily a bad thing, but gamers should know going into it what to expect. In this case, it means a lot of reading. 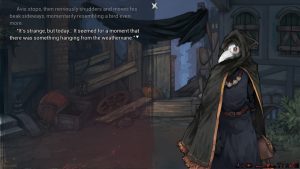 Thankfully, the story presented here is quite good. It was written by author Gilbert Brissen and follows the dark tale of a medieval town besieged by plague. Only in this world, not all sicknesses are natural. Some of them are brought about by evil spirits. Some of the biggest plagues and rapidly spreading diseases are the result of interference from the god-like Plague Maiden. She sometimes blesses those who have been wronged by igniting a plague in their honor, which doesn’t stop until the one who wronged them falls victim and dies. Apparently plagues can also be summoned by evil wizards. I guess those rats and fleas of real life plagues are out of work in this world. 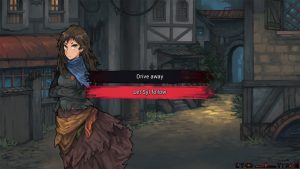 You play a young man named Richard Murdock. As part of the Sanator brotherhood, it’s his job to fight the plagues that ravage the world. He is one of the younger members of the brotherhood, at least that is what you will think by looking at him, but he is still basically the equivalent of a doctor, or perhaps a resident with training but less experience than full doctors. Sanator brotherhood members wear those telltale bird masks that you sometimes see in medieval literature. Their purpose is actually explained here, as you stuff lots of gauze and healing herbs into the beak and then draw breath through it, hopefully filtering out plague germs. The rest of your cloak and costume, plus your gloves and shoes, are similarly designed so that no flesh is exposed to potential hazards or diseased fluids. It also gives the Sanator brotherhood a unique and somewhat intimidating look. 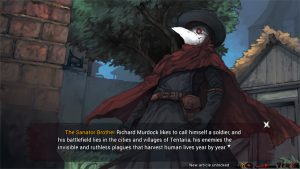 Being a doctor in this world is a little bit different than in real life. For one, you may have to kill a patient if that is the best course of action. Better to end their suffering than to let them spread the disease to others. Plus if you happen to kill the person who is the reason for the outbreak, the one who wronged somebody and provoked the Plague Maiden, then it’s like hitting a hole in one and the plague will end. You also need to know how to fight, because not everyone is happy to see the brotherhood coming, and may resist your ultimate authority over all things disease and sickness.

Visually, Sanator: Scarlet Scarf is stunning. The art style is really detailed with great uses of light, shadow and color to help get various points across or to set the mood. This is a dark tale for sure, and the visuals reflect that. Seeing the artwork here is every bit as good as what you might find in a pen and paper graphic novel. The sound is of course lacking. There is no voice work, so be prepared to read a lot. 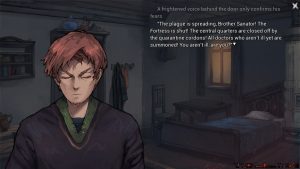 Gameplay consists of making various choices for Murdock, which leads to different endings. However, just because you get to an ending does not mean you are done with the game. The unique goal here is that you need to find every possible ending in the game to trigger a final, secret ending, which is how the tale is really supposed to finish. I know this because it’s the only one that leaves open the possibility of a sequel. Each time you see an ending, a little bit more of a rune is colored in on the title screen, so you know basically how close you are to seeing them all. Once you have unlocked all the possible endings, you have the option to see the true ending. 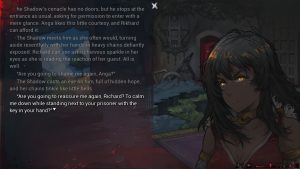 I am a little bit on the fence about this true ending mechanic. Some of the ways the story wraps up are quite good, and I was pretty happy with how my original story concluded based on my choices for Murdock, and what I might do in a similar situation. Going back and making choices that you, the player, don’t endorse just to try and unlock every possible fate seems a little wrong to me. At least the game helps this task from becoming too tedious by offering to skip text that you have already read in a previous playthrough. That way you can skip to the choices and simply pick other paths to unlock them and their sometimes horrible endings. Unfortunately you have to keep track of all your previous choices, because the game wont do that for you. I had to create a little matrix on paper so I could finally find the last ending that I kept somehow missing. 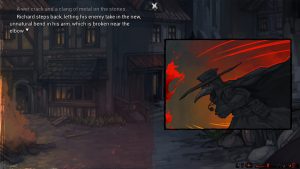 The hidden conclusion to the story is fine, and leaves open the possibility of a sequel. It’s odd that you can’t get that ending the first time you play no matter what choices you make. The only way to unlock it is to see every other ending first. To me, that makes the player less invested in the outcome and the story, and hence the sequel, since there is no way to naturally get there, so you don’t feel like arriving at that place was because of your natural choices. I didn’t feel like I owned or earned the canon ending. But I suppose it encourages players to see all of the content offered. It also makes the game a little longer, because Sanator: Scarlet Scarf is very short in terms of gameplay. If put on paper, it might only be about 24 pages or so.

Sanator: Scarlet Scarf is a visually stunning experience with a rich, dark story in an imaginative world that is close enough to our own to be relatable, and alien enough to be fantastic. Those who like this kind of story and game hybrid will find a lot to love creeping through these dark pages.