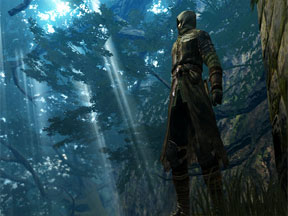 Having never played the Dark Souls games before, I didn’t really know what to expect when diving into Dark Souls: Prepare To Die Edition, which is the PC version of the Xbox game. Now, when a developer revels in the fact that their game is so difficult that most people won’t be able to play it, that’s kind of a red flag. I play games to have fun. But I also like challenges, and consider myself a top shelf role-player, so I figured what the heck.

Now before I get into the actual game, which was surprisingly good, I do have to lament the fact that there is a hell of a steep learning curve, but I’m not talking about the difficulty. The Prepare To Die Edition was ported directly over from the console, with no thought to PC controls whatsoever. This is unforgivable.

Even the tutorial is messed up, telling you to punch non-existent keys as if you were sitting in front of your Xbox. A prime example is when it tells you to push the ‘A’ key to perform an action, when it really means the ‘Q’ key. Even if you knew that there was an ‘A’ button on the Xbox, you still wouldn’t know the keyboard equivalent was, and would have no choice but to mash buttons until you found it.

This oddly misleading tutorial applies to just about everything, either telling you to press non-existent buttons like the right trigger, or simply telling you the wrong thing. Sadly, the menus are the same way. When I tried to attune my magic, which I thought was needed to let my sorcerer cast spells, I ended up getting stuck in a menu where I had to push the ‘X’ key to toggle my selection, only of course they did not mean the X key. I ended up just pushing every single button until something happened, since even pressing Escape, which works in just about EVERY PC game on the planet, didn’t bring up the game menu where I could set the keys.

It would have been so easy for developer From Software to simply read whatever button was assigned to an action and have that appear in the tutorial. Every game from Max Payne to Skyrim does that, so it can’t be difficult. But it seems like From Software just didn’t care. They could not be bothered to do even the bare minimum to port a game to a different platform, and the result is a bit of a jumbled mess. I lowered the gameplay score quite a lot because of this. Had I not been reviewing the game, I would have never struggled so much just to make it work.

The game even forces itself to run at a lower console resolution. So if you are used to seeing brilliant Skyrim-like vistas in super-high resolution, you will suddenly be stuck seeing a blocky world by comparison. Thankfully, some fans created a patch that lets it run at a higher resolution, which is automatically applied to the Steam version of the game. But here again, we have the fans to thank and not the developer.

Once I got the interface figured out, I found that I could actually enjoy playing in their dark and gloomy world. There is a wide variety of characters to choose from, and they all have different abilities. Every class can theoretically do everything, but what you start out with helps to determine how easy learning new skills and advancing down a certain path becomes. I tried quite a few, and think that the sorcerer might be the best, especially for new players. They are given the soul arrow power by default, and it is quite helpful, even late in the game. Many monsters are deadly, and being able to kill them at range is helpful in the extreme.

The world is quite a dismal one by default, and I must admit I did like its flavor. Once you get out there, you will find all the normal quests and adventures that keep RPGers happy.

Combat is brutal and often very quick. Monsters don’t even pretend to level with your character. If they are several levels higher than you, then you are simply in trouble if you cross their path. Even on-level fights are hard, though once you get into a rhythm of blocking and swinging, shooting and moving, you can actually fight well above your experience level. And that is what makes Dark Souls so satisfying. There is a lot of skill involved in the combat, and if you master it, you won’t just feel like a badass, you’ll actually be one. And trust me, some of the enemies in this game will require a supreme level of skill. They are downright terrifying in looks and in deeds.

Graphically, the world looks good, especially once the resolution patch is applied. It uses a rather dark template of colors for most places, but that is just the art style. It’s also interesting to play in third person, and necessary to see what’s going on around you in combat, because most RPGs like this are first person.

Now, for all the talk about how hard the game is, I didn’t find it too difficult. But I am a cautious player by nature. Yes, it’s possible that you will just be walking along a quiet road and something will swoop down out of the sky and kill you. But higher level monsters generally stay together in places where you would expect to find them. What happens is that you will be exploring a dungeon or a sewer or whatever, and you will gradually begin to realize that the fights are getting to be pretty difficult. If you find yourself running back to bonfires to heal up after every minor confrontation, it means that you are getting in over your head. If you push on, you will probably die.

But there is that voice in the back of your head telling you to keep going, that you can handle it, that riches await the bold. Screw that voice. It’s going to get you killed.

Being a very cautious gamer, I would simply turn back when that happened, get better gear, more skills and higher levels, and then come back later. This is not to say that I didn’t die quite a bit, but only slightly more than with other RPGs. On the plus side, I never go so powerful that I felt like playing was almost a waste of time because I was simply too much of a Herculean-ninja-archmage-assassin who could one-shot bosses with my eyes closed. Dark Souls was always challenging, and that made it quite fun overall.

Would I recommend Dark Souls to others? It depends on what type of gamer they are. There are games like Dishonored that really put an emphasis on a certain style of play, like stealth in that case, and penalize those who go a different path. Dark Souls: Prepare To Die wants you to be a cautious gamer, and if you defy that, then your reward is death. There is no way around it. Since I personally fit into that mold anyway, I didn’t find it much of a problem to be careful how I explored, but those who enjoy charging in with axes blazing will find that their journey is over too quickly.

So depending on how you like to play, Dark Souls: Prepare To Die is either the brilliant and challenging title you’ve been looking for, or a huge waste of money for something that you won’t play for more than a half hour. I give it 3 out of 5 GiN Gems, though if it had actually been ported over to the PC in a good way, it would have earned more. As it stands right now, if you have the means to play Dark Souls on either the PC or the Xbox 360, choose the Xbox version.