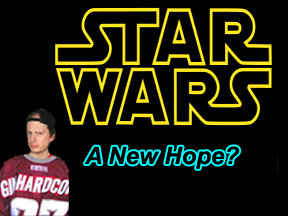 I will admit that a long time ago, in a town not so far far away from where I live now, I was a huge Star Wars fan. There was a time I watched all three films almost nonstop to the point that I can still recite them verbatim.

Oh wait, let me rephrase that, I meant the ORIGINAL films. I owned them all in VHS and remembered them as the ‘One Last Time’ collection. What I remember most about them was the very ugly box design that featured a close up on an Imperial Stormtrooper’s face for A New Hope (which if I remember correctly was the first time the film’s package used that name.) There was also close ups for Darth Vader on Empire Strikes Back and Yoda for Return of the Jedi (which also featured a new design for the title that I absolutely hated.) Still, despite the packaging, it was the way I remember the trilogy, the way it was meant to be.

Then came the Special Editions that following Winter. When I first saw the trailer, I heard it hinted at a ‘few new surprises.’ Who knew back then what I would suffer from? Whether it was a badly designed CGI Jabba or the travesty of Greedo shooting first, I should have known that it would spell doom for a franchise I once loved.

And don’t even get me started on the prequel trilogy. Talks about trade route taxation, midi-chlorians, Jake Lloyd and Hayden Christensen’s horrible takes on Anakin Skywalker, and yes, God help us all, Jar Jar Freaking Binks, damaged the movies beyond repair. Even Samuel L. Jackson’s badassery couldn’t bring balance to this Force.

Even with all of that, Lucas couldn’t leave the original series well enough alone. Not only did he butcher the trilogy TWO MORE TIMES with the DVD and Blu-ray releases, but started this year re-re-re-re-releasing all six films in 3-Freaking-D. The Phantom Menace was already released this year, with each succeeding episode to come out every year. Yes, Star Wars in 3-Freaking-D until 2017!

Star Wars games fell under the same fate. We went from great games such as Tie Fighter and Jedi Knight: Dark Forces 2, and the Rogue Squadron trilogy to horrific titles such as Super Bombad Racing, Force Commander, and God forbid’Kinect Star Wars! Needless to say the Star Wars name pretty much was dead to me by then.

And now I have to wonder what is going to happen to the franchise after the announcement earlier this week that Disney bought LucasFilm for the price of $4.1 billion! Yes, Disney now owns Star Wars. That image alone makes me want to scream. All we need is to see direct to video releases featuring Jar Jar or the Jake Lloyd era Anakin Skywalker taking up shelf space. Or even worse, more budget based Wii or Kinect games that will feature these characters. I hope not, but then again, Disney left the game business a few years ago, and I’m still hurting from the lack of a true sequel to Split/Second.

Then again, maybe I’m overreacting. Sure I’m not a big fan of the Disney empire. Maybe it was from growing up in a household that lived and breathed Disney, but there were some elements that I loved. Of course there were the excellent Tron movies. Yes, I admit that I liked Tron Legacy but that was mostly because of the awesome Daft Punk soundtrack. They own the Muppets, which thankfully have been brought back to prominence in a feature film, and of course, look at what they did with Marvel. Do I need to mention again how great The Avengers was when it came to theaters?

So yeah, there might be a light in the end of the tunnel with Disney buying Star Wars. I guess we’ll have to see. Episode VII is scheduled to come out in 2015. I only hope they make it a more mature storyline similar to that of Empire. Keep it dark and serious and the fans will come. Add asinine comic relief a la Jar Jar Binks, and the fans will rebel…again!