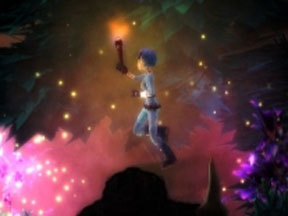 Crash landing on a planet seemingly uninhabited by intelligent life, one brave character drab in the color of your choice will brave the elements, and various giant spider things, to stay alive and build really awesome homes or bases from which the player can operate in a location. Unless having hidden underneath a sizable rock for the last few years, many gamers have heard the names of games like Minecraft and Terraria, two solid examples of the, ‘Sandbox and Don’t Die’ games (that’s, uh, my genre classification for those. Adventure/Platformer doesn’t really seem to fit). If you were wanting to build a kickass laboratory on an alien planet and get shot at by jellyfish, then read on.

Players of Darkout will be immediately subjected to a brief series of text boxes to explain what the player should generally do while attempting to play Darkout, from digging to collect dirt to form the walls of your house to mining various ores and materials to craft better weapons, armor and spend research points to add facilities to your home or additional functions to your suit, such as making them luminescent. Most of the actions in the game, from salvaging something for resources to digging, requires that the player holds the mouse cursor over the object in question for at least three seconds, potentially longer. This makes even grabbing dirt a fairly tedious task, which is something you’re going to be doing a lot of throughout a playthrough.

Of course, Darkout is always baiting you with prospects of improvement. Should you stick with it, working toward a new suit or the newest high-tech addition to your base can become extremely addicting, as each will improve your survivability by a significant margin. Later items, such as jetpacks, are definitely a goal worth working toward and will help you read every single data log through which this game conveys its story. So, to answer, yes, there’s a story in Darkout: It’s told mostly in the same vein as the Metroid Prime series, with the player finding various bits of lore and data logs of what happened to people who had previously attempted to brave the alien planet on which you are currently killing anything you come across (Green Peace, you are not).

Darkout’s largest attraction is in its focus on exploration and crafting: Making your own initial home base is fine and dandy, but attempting to make your own Fortress of Solitude takes quite the time investment and practically ensures that you have already fought some of the baddest and meanest the planet has to offer. There’s plenty of fauna that wants you dead in this game, from little jellyfish that are relatively easy to eliminate to spider-looking creatures that will stop at nothing to eat your limbs.

The downside to the combat is, unfortunately, there’s no real control in combat outside of clunkily aiming your firearm at the foe or swinging a random object from your hot bar at them. Sadly, the hitboxes just don’t feel right on most, if any, of the enemies, so always be sure to aim for center mass and don’t be surprised that your melee attack is constantly missing just because your elevation is slightly higher or lower than your target’s, even if the animation is showing contact.

One interesting thing that the game doesn’t even tell you about is that most of the creatures that try to kill you loathe bright lights, so shining a flashlight at them will make a solid portion of them flee. In the game’s defense, however, it does tell you that light is important, which is obvious because once you start to dig you can’t see anything at all, but it doesn’t mention any interactivity with the monsters.

Now, if a lot of this sounded like Minecraft, Terraria or Starbound, you’d be right: The games are extremely similar, especially in the case of the latter two since they’re each 2D games.

The largest problem with Darkout, especially in relation to its peers, lies almost solely in pacing and unnecessary and time consuming systems of the game: Digging to obtain materials to make walls for a base is needlessly slow, and while the animations are nice, they just take loads of unnecessary time given how many times your character is going to strike their pickaxe or shovel against a block. Actually placing the blocks or walls is also unnecessarily clunky, since players have to press Tab to open up their inventory, drag the block or wall to the hot bar, select that segment of the hot bar with the number keys and then use the left/right mouse buttons to place the blocks. This was something that wasn’t difficult until having three or five different types of blocks needing to be placed to renovate the base, but it is one of those things that players will accommodate to over time and determine their very own system of where each weapon, tool and block should go on the hot bar.

Additional problems lay in the vein of the tutorial – after getting a few basic ideas on how to do a couple initial things, the game basically throws the player to the wolves. While it’s understandable to want the gamers to figure things out for themselves, it can be somewhat annoying to have your very first death be the result of accidentally dropping your weapon and having no idea how to reequip it, and when the initial enemies have full capability of killing the player character in just a couple hits, this can lead to some obvious frustration as little is explained. Of course, some players will stick with Darkout and figure out everything there is to know about the game…but some will easily be turned off by how much they’ll have to consult forums, etc., in order to figure things out and whether or not their problem is the result of the steep learning curve or just a glitch.

The graphical presentation of Darkout is superb: The characters are animated fluidly and the landscapes are just magnificent, with great use of colors and various particle effects throughout to really get across to the player that the flora is significantly alien. Overall, Darkout seems to be attempting to be a prettier version of Terraria, with smooth aesthetics and similar gameplay systems.

The sound is about average, with nothing really jumping out at you aside from the various noises of the creatures. There’s really no music variation throughout the game, at least nothing that was noticed, so don’t expect a riveting audio track to set the mood for you while playing the game.

There were also many issues found while attempting to review the game, to the point where it was nigh impossible to actually review it due to crashing, the game telling you that you don’t have an item you need to progress while you blatantly have said item in your inventory, and more. A couple of these issues introduced through the patches, and requiring savvy players to rollback to previous builds of the game if they actually want to, you know, play the game. The game can also be very punishing while the player is reviewing the few tutorial text boxes at the bottom of the screen, going so far as to spawn spiders on-screen with the player while salvaging their ship, as the text boxes say to do. Getting killed because you don’t even know how to attack the enemies yet is just poor design and needless (you’d assume clicking them would work, but if there’s nothing set to the hot bar at the bottom of the screen, you won’t do anything at all and just stand there getting hit) death. There’s very little punishment for dying, though, so supposedly it doesn’t matter if a blackhole randomly appears and drops 10 spiders right next to the player’s ship in the first couple minutes of playing, because you’ll just respawn and can run away if needed.

To summarize, Darkout is a game with boatloads of potential…but it’s just not there yet. It stands in similar genre fields as Terraria, Starbound and Minecraft, but there’s really no reason to look into this particular game when you have access to any of the other games of this type, at least not as it stands. Dodgy patches, a tosser for a tutorial and requiring large amounts of time invested due to the lack of streamlining just scratch the surface of the problems with Darkout, and those problems were large enough to reduce this reviewer’s enjoyment of the game by a fairly large margin.

Of course, I’m certain there are those who can’t get enough of these types of games and may likely not be bothered by the current issues with Darkout, which by all means, if those things don’t bother you, then there’s a load of entertainment to be had. Hopefully future patches will fix some issues with the game and streamline it a bit, making it more accessible on the whole, because Darkout would only take a little bit of polishing to rid itself of varnish and stand shoulder-to-shoulder with other games in this genre.