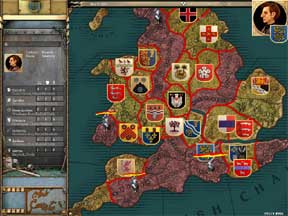 Like a young prince suddenly ascended to the throne, when I first started playing Crusader Kings, I was completely lost. This is without a doubt one of the most complex strategy titles that I have seen, and I have played them all.

Paradox is known for in-depth strategy games. Hearts of Iron, their World War II simulation, was one of the most complex games I have seen so far. But Crusader Kings even beats that one.

Gamers should expect a steep learning curve when popping this game into the drive. However, if you can push through the complexity, the rewards are equally high. This is one of those games where you get out what you put into it.

The game takes place just as Europe is pushing through and trying to awake from the Dark Ages. Instead of huge countries like England and France, the world is divided up into little counties and fiefdoms. In a few places a county or two have combined to make a larger realm, but there are few over-arching leaders. Even people like the king of England do not truly control all of the country like we think of it today.

One of the coolest parts of the game is that you can play as a big fish or a small fry. One of the most fun games I played so far had me in charge of one single, little providence at the onset. Granted I did not become William the Conqueror, but was able to vastly improve my realm and even expand it through skillful marriages and diplomacy, and one single bloody war. In Crusader Kings, like history, there is no winner though there is a long list of losers. Basically you can be declared the winner, but so long as you improved your country and your family’s fortunes you can consider it a good run.

Interestingly enough, conquest is not the overall goal of the game, though in truth it plays a huge part in what you do. What you really want is prestige, which is your overall respect as seen by the community of nobles that rule the land. You can get prestige by claiming titles like king or duke of a realm, which mostly involves combat.

However, there are other ways to gain prestige and even territories. If you marry and start a family, you can start sending off your daughters and sons to marry people in rival kingdoms, which strengthen your ties with them. Then you can make another leader your vassal, or become their vassal if required. Family relations are very important in the game, and are one thing you have to work on to be successful. If all else fails, you can try to assassinate key people in your family that are blocking your progress, or rival rulers as well.

You also have to improve your relations with the church, which can be seemingly odd considering all the killing and scheming you are doing. But as a Christian ruler, you will need to improve your piety by donating to the church, taking care of the clergy in your realm and fighting in the crusades when asked. You can also gain acceptance by conquering pagan and Muslim-held lands.

Finally, you will have to research technologies and improve your infrastructure. Technological improvements include things like better bows and armor for your troops, as well as societal improvements like defining the rights of secession and inheritance as well as new forms of art and culture. Infrastructure includes improving the road network through your kingdom, and then charging tolls for people to pass on them, and building up industry.

The combat interface will be familiar to those that play Europa Universalis. You march your armies into battle, but then you don’t have any control over the outcome. Normally the better trained, better equipped, better led and larger force will carry the day. Fortifications built in the defending land also play a major factor.

The game keeps your interest by both the ongoing intrigue and also the amazing soundtrack, composed by Inon Zur. GiN interviewed Zur a while back when he was working on the soundtrack for Icewind Dale, and he is without a doubt one of the most talented composers working in the game industry today. He really brings the Dark Ages to life here, with a score that is both inspiring and engaging.

Finally, one of the best parts of the game is that even when it’s over, you can still keep working with the country that has caused you to spend so much of your blood and sweat. If you have gotten things in your realm all shaped up, then you can save your country and then import it into Europa Universalis II, where you can try your hand at continued survival in the Medieval Age.

So Crusader Kings does something I don’t believe any strategy game has done before, and that is creating a way to found a country in one game and then continuing to develop it in another. To follow this chain of events you are probably going to want to clear a weekend, or perhaps take some time off work. The game is also playable over the Internet or a LAN, with a maximum of eight players.

Crusader Kings asks for a lot from players, but it gives a lot in return. Few games are this detailed, but few are also this rewarding. To take a small province of land and its people through the deadly Dark Ages and mold it into one of Europe’s great powers is no easy task, but if you can do it you truly deserve the mantle of Crusader King.