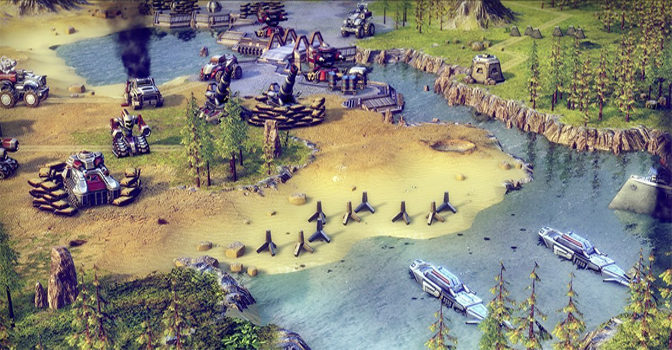 A successful Kickstarter campaign proved the world was ready for more Turn-Based strategy warfare. The question is whether Battle Worlds: Kronos is the exact product they were looking for. BWK is a turn-based war game that takes clear inspiration from Panzer General, although fans of Advance Wars and Fire Emblem will also feel at home. What’s wild is that those Gameboy Advance titles occasionally have features that BWK does not possess on these mighty machines in 2016.

BWK begins with a rather explosive beginning, with a commander surveying a territory before lighting it aflame. The dystopian storyline is exciting for those who enjoy it, describing a world that borrows mightily from Game of Thrones, The Hunger Games, and Ender’s Game. Pretty much anything with “game” in the title. This is then juxtaposed mightily with a text explanation of why the game is going to be so hard. Thus is the process of playing BWK: You will be wowed one second and confused the next.

I admit I groaned when I first read the proclamation of difficulty from the creators. Not only was it odd to have the design team break the fourth wall, but the idea they thought they’d earn points by grabbing for a greater challenge seemed to be playing into today’s indie fads.

I was then delighted to find the tutorial was so descriptive. Hard games can be fun if they are fair, as the developers themselves admit. From the outset it seems that is what KING Art Games is after. The tutorial is not for the faint of heart, but it is not confusing either. Anyone who enjoys a chess-like strategy title will feel challenged, not overwhelmed.

This is until you get into the first few levels, and find yourself confused frequently. The average gamer could easily lose on the first level. There is no hand-holding to be found here. You will find yourself digging through text tutorial after text tutorial like this were the 90’s. Some will appreciate the throwback and the depth, but others will be immediately frustrated.

Blessedly, I felt part of the former camp. Once you get through some of the more archaic designs BWK is a really fun ride. It’s a thinking man’s turn-based strategy game. If you have a very intense schedule and can’t muster up the energy to play an FPS at the end of the day this is a relaxing and intriguing break from the real world. You can take the game at its own pace. You will never feel completely stumped nor dully coddled. If you want to play Spotify and turn off the in-game music it’s a very nice off-label way to chill after a long day.

That said, much of BWK begs a keen eye for no reason. You get the sense they did not have nearly the resources they required, and many key tasks went to inexperienced or rushed designers. It’s hard to know what troops you are firing on. The game directions are confusing.

They do however navigate the console control mapping admirably. It is always very difficult to take something as dense as a strategy game and put everything onto the simplified joysticks. However, they make a great design choice, working with a hexagon-composed playfield, like early Turn-Based strategy games used. This removes the necessity of a point-and-click interface. Many other tasks are very simple with the game pad, but the directions on how to use it most efficiently are lacking.

The only area where the controls get annoying lies in troop selection. Many titles allow you to select multiple troops and put them in a general area when you’re just travelling across the game board. In BWK you need to select each troop individually. Certainly, this is preferable in the precise gameplay that involves a military skirmish, but the feature would have been welcomed otherwise. It makes levels unnecessarily long.

BWK does have many redeeming moments. It is challenging and fair. The AI is pretty clever, except for when it inexplicably goes after weak ground forces while you move more valuable assets to safety in full view. Many hours can be spent enjoying this game, despite confusing menus and direction that make the difficulty less rewarding.

Others will not enjoy this game stylistically. This is very much a resource management intensive stat title. Much of the action is attack, retreat, and repair. For those who are hardcore real-world military enthusiasts this realistic approach will be welcomed. For those who want to get in there and play speed chess then Battle Worlds: Kronos is not going to be their game.

The story also diminishes the enjoyable aspects of the game. Eventually, the promising beginning putters into nothing but a succession of excuses to fight brightly colored troops. While Turn-Based Strategy titles have about the same plot expectations as pornography there’s little brevity or humor to break up the boring narrative. Each scene is melodramatic and seems to flicker at a slow framerate.

This is baffling, especially when you consider how great the game looks otherwise. The full map views are gorgeous, and when you get closer the troop models have a nice shine to them. For what it is supposed to be the visuals work wonderfully.

In regards to audio, BWK has a great deal of ominous wartime music that heightens the tension as you run from pursuing marauders and attack a base who is overwhelmingly better staffed than your divisions. There’s many references to real campaigns on Earth and authentic sound effects. This makes the game more believable to the audience member, making it much more real to them, the way Game of Thrones is more intimate than Lord of The Rings because of its imitation of language and themes found in real life.

All in all, Battle Worlds: Kronos is a very fun game for a specific audience. It is odd to write an entire review mostly on the game’s faults, but this must be done precisely because they are so baffling. When you’re deep in a level’s matrix of decisions, pondering your next move, the old Turn-Based strategy rush is palpable. It is a slow burn of the highest order, which is sadly being lost in much of today’s video game intensity arms race.

Normally, after I am done reviewing a game, I do not return to it. It’s not that a game couldn’t have been enjoyable, but my schedule is fairly intense, and if a game is not excellent I am just going to spend my gaming hours on something else.

I will certainly be returning to Battle Worlds: Kronos. The title is a blast with a little coffee, some time, a curious mind, and a couple of hours. However, it’s greatest asset is also its largest weakness: The game appeals to a very certain niche.

There are few turn-based titles of this caliber on the PS4, but on the PC and elsewhere there are more balanced genre entries. It’s excellent for those of us who are former hardcore gamers who now find ourselves working and unable to muster the energy and game playing options we so easily summoned before. Yet, the title isn’t as intricate as the best titles in its genre, nor is it as accessible as other attempts on the formula. So, for those who possess a patient disposition who are specifically looking for a Turn-Based Strategy title on the PlayStation 4, the game is incredible. For gamers with other options they might find the clunky interface too much to bear.