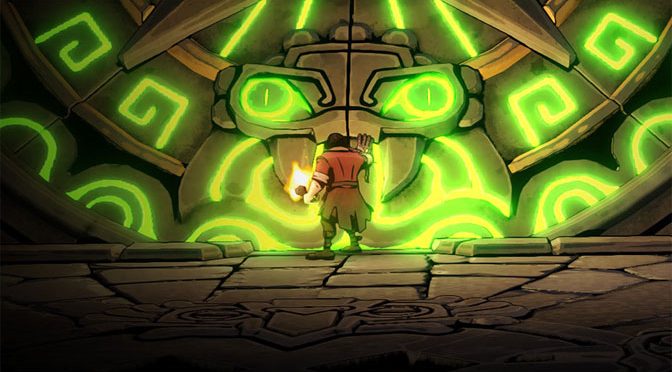 Curse of the Dead Gods

Roguelikes are having a moment, and Curse of the Dead Gods is yet another entry into a genre that’s struck an incredibly rich vein of form lately. With gems like Dead Cells, Hades, Rogue Legacy, The Binding of Isaac and so many others leaving their marks on the gaming world in the last few years, roguelikes are going from strength to strength without any sign of slowing down.

If you’re a fan of the genre, Curse of the Dead Gods is an absolute delight and well worth your time. That said, as with so many other others, if roguelikes aren’t your cup of tea, the punishment of getting killed repeatedly can still be frustrating, and there’s only so much the incremental progress is going to do to help you until you get better at the game. (Hades is the exception to this. Seriously, even if you hate roguelikes, go play that game right now.) 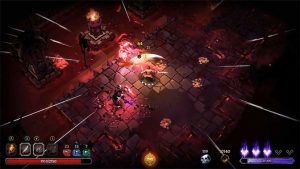 Curse of the Dead Gods doesn’t hold your hand, challenging you to cut through its procedurally generated, cel-shaded dungeons quickly but carefully. Each run starts off with players choosing a starting path and a basic weapons set. Players can carry up to three weapons at a time, and depending on how many upgrades have been unlocked, will have a melee, ranged and two-handed weapon at their disposal. 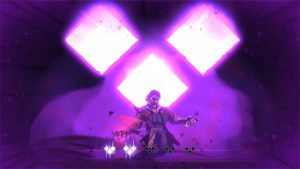 By progressing through the levels, you’ll find opportunities to upgrade or switch your arsenal, sometimes at the cost of gold (if you have it) or at the cost of corruption, one of the game’s core mechanics. Every time you complete an area and enter a new room of the dungeon, your corruption meter fills. Once it hits 100%, you gain a curse before the bar resets. The curse can be something as simple as certain braziers burning with a dark flame, preventing you from lighting them, or it could make traps more deadly, even turning once harmless statues into dangers.

Coupled with the challenge of gaining corruption through standard level progression and choices you’ll make throughout the game, you also have to watch for certain enemies whose attacks not only take away your health but also inflict corruption simultaneously. You be cursed up to five times, but taking that many curses during a run usually ends it prematurely. 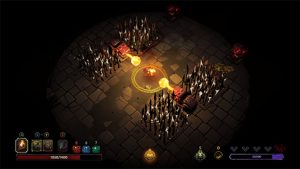 The game’s isometric viewpoint allows you to see what’s going on around you to an extent, but that only goes so far. Curse of the Dead Gods features a light and dark element that forces you to use light sources to uncover traps and also make enemies less deadly. You can pull out your torch, but you do so at the cost of your melee weapon. It’s easier instead to light braziers or flammable patches of ground to create a light source and make enemies easier to see. You also take increased damage in the darkness (unless you have a curse altering that condition), so staying in the light is always a good plan. 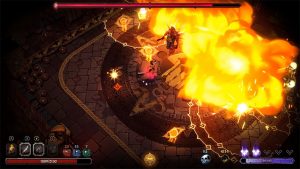 Of course, the old adage that the best defense is a good offense stands true in Curse of the Dead Gods as well. Enemies can’t kill you if they’re already dead, and you’ll quickly come to find certain playstyles, weapons and tricks that help you dispatch enemies quickly. Being sharp on the dodge button helps, too. The game features a stamina meter to prevent you from spamming certain actions, such as dodging, so getting the timing down is crucial to your success. 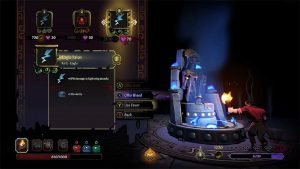 One other piece crucial to completing a run is understanding your build. Allocating points and upgrades without a plan is a great way to die early. As will all roguelikes, your initial plan for a run may change based on which items, their associated elements and different upgrades appear, but you should be building toward something that creates an overall theme or effective attack pattern. 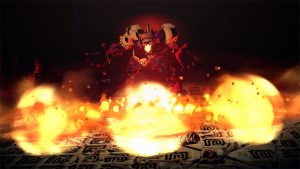 The cycle of attacking, dodging and exploring encourages players to move quickly but cautiously, and standing still isn’t something you’ll do often. However, if you do find a brief moment to stop and smell the proverbial roses, it’s worth taking a look at the exquisite art style and gorgeous attention to detail Cruse of the Dead Gods has on offer. The way shadows and light play along the cryptic halls of each dungeon is gorgeous, and it accentuates the phenomenal cel-shaded art style perfectly. 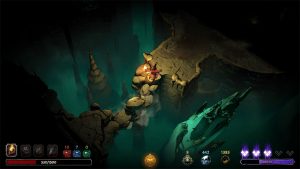 The audio does a great job bringing out the foreboding feeling of creeping through a trap-ridden dungeon, too. Step on a hidden spike plate, and you’ll hear it with a cringe-inducing sound that you won’t want to hear again. (But you will because the darn things are everywhere.) The weapons all sound great, and the overall audio experience enhances the atmosphere in a way that helps bring the game to life more fully. 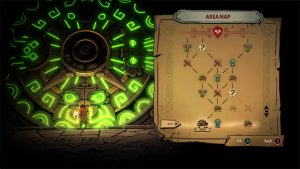 With all of that said, it’s an excellent, delightfully challenging game that gets 4.5 GiN Gems out of 5.