In a dessert left for dead hanging on a cross your savior comes to free you. As an exile in the lands of Conan the Barbarian your journey only just begins, as you must travel the dangerous road ahead.  Here lies many dangers but as you progress you become stronger better equipped and you survive.  Along the way you meet friendly tribesmen and not so friendly barbarians,  explore ancient ruins, and fight off deadly monsters and cannibals.  This is the journey known as Conan Exiles.

Though it is still in early access the open world survival game Conan Exiles is very impressive. Combining a single player and co-op experience with the choice of PvP and PvE online gaming comes together to produce a fully immersive and rich experience.  Before diving into the heart of the game players will find there is a learning curve that could frustrate players. However, after learning the tricks to survive and keep loot and crafted items it is a rewarding and enjoyable game with hours of activity. Once you start crafting structures and shrines, forging higher ranking tools, and making it your own it keeps you as a player involved.   As an early access game there are still bugs, mostly with animation and NPCs, but even that didn’t deter me from enjoying the game so far.   However, even with a mostly positive experience I still felt that there is room for improvement in some of the gameplay aspects.

Let’s look at the best parts of this game. When beginning after the opening sequence you get to choose a character and customize him or her. The opening sequence showed a man saving a female from a cross. However, on the customization screen you get to choose whether or not to be male or female. It doesn’t stop there. Players get a list of choices and customizations from race to religion to physical features.

For the physical characteristics there are choices to adjust facial features to a good selection of hairstyles.  A good MMO always has a variety of features and hairstyles, especially female styles which can be lacking.  Good customization allows players to create a unique character that in turn creates a more personal game style.   I must say that this was a good start to the game.  The character I chose was a  female Tribal Himelian named Kira.

Tribal Himelian are a survivalist society and fiercely loyal people.  For my religion I choose Set only because I have an obsession with ancient Egyptian mythology. The voice was the most spirited of the six, and yes you even have six choices of voices, same with the male characters.  Players also can turn the head to view how your character will look. With an awesome Mohawk hairstyle I felt like taking on the beasts and enemy tribes that stood in my way. Afterward you get a placard on the body as a summary of your character and accused crime. Kira was accused of piracy, inciting a riot, and fornicating with low beasts before being left to die on a cross. True or not that was a very interesting choice of crimes.

Another feature is players also can choose nudity amounts. The starting character can have some clothing, which is just scraps of cloth to cover-up, partial nudity, or full nudity.  I didn’t find it that important in choice and more of player preference.  For this demo I stayed with the basic wraps and no nudity. Once you gather enough plant fiber you can start crafting basic clothing. As players level up and obtain more skills they can start crafting armor and more durable protective clothing.

Another good aspect of this game is the gathering and crafting mechanisms. There are plenty of crafting resources scattered around the environment and these resources can even be gathered while moving. Movement gathering is good for branches and stones and sometimes fiber. However, to get the most out of a plant I found collecting while standing next to the plant got fiber, seeds, and insects. Insects are a quick source of nourishment when animal protein is not available. Eggs are also a quick source of food that does not have to be cooked.  Like in real, life players must cook meat before consuming it or you will get food poison and become vulnerable for a set amount of time. Other resources need more effort to collect such as wood, metals, and harvesting larger stones. Players need to craft tools to harvest these. Hunting animals is necessary for meat, hides, and bones. You also might end up with human flesh in your inventory but it can’t be consumed by every character, only worshipers of Yog.

The crafting system allows players to craft a wide range of items when the corresponding recipe is acquired. Some recipes like mercenary give players the ability to craft weapons, and survivalist leads to tools for survival such as bows and campfires. Other recipes give players the ability to craft stone structures and textile-crafting skills. To produce the biggest benefit I choose recipes from a group of skill sets.

Back to the gathering  and I mentioned food.   This part is one of the more clever aspects of Conan Exiles. Unlike other games where a player has only a health bar or an added power bar that is replenished from resting or medpacks or magic this game forces players to replenish more than just health. Health regenerates with rest, but you also need to drink water and eat food. On the HUD there are indicators for health, stamina, food, water, and crafting skills. As in real life we need to eat and drink water to sustain life, your Exile needs these basic necessities to stay alive. Water can be drunk from water sources or crafted water skins. Food comes in many varieties from seeds and insects for quick nourishment, eggs that can be consumed raw, or from hunted animals. Animal meat is roasted in a campfire that needs wood to burn.  Campfires also hold inventory.

The first challenge I came across was saving my inventory and respawning.  A quick way to create respawn points is to place a bedroll at established camps. These respawn points need to be updated every time used or you go back to the starting point.  It can be annoying if you lose your respawn location.  The other thing is players will lose their entire inventory when killed unless you create a campfire or build homes. Players can dump inventory at these sites, which can be retrieved after respawning and you can also loot your corpse after respawn. I just create a campfire and keep essential crafting supplies, tools, extra campfires, and needed items so I don’t have to craft everything over and over again. It would be nice to keep inventory on your character after dying, especially clothing. The only thing not lost is abilities and skills.

The only real issue, not bug related, I had with the game was respawning with no inventory. This gets to the point that there is a learning curve and single-player is a good place to really learn the game and hone your skills. In this mode there is interaction with NPCs in game. Friendly NPCs will give advice and help in your journey. Not so friendly NPCs will attack, as will monsters and carnivorous beasts in the environment.

Conan Exiles has a good AI and challenging enemies. The enemies do get harder farther you progress in the game. As for enemies, the monsters and beasts in the environment run to attack once they spot the Exile.  Human enemies stand at their camps waiting for the player’s character to come within their line of site. When they attack they fight with weapons and some have shields making fighting the enemy tribesman a tough battle. It also doesn’t help when you are fighting an enemy human and a crocodile also comes in for the attack. Everything wants to attack in the environment making the environment a dangerous place especially at night.

In the online version players have many options to choose from.  This includes  PvP to PvE and choice of community. Some of the choices are purist to play as the developers intended the game to be played, role playing for a more immersive storytelling experience, and hard-core for a more extreme gameplay. When entering online mode the game starts out the same and plays the same as the single player with the only difference being the addition of other players. The beauty of this game is the choice players make either play as an MMO or as a single player/co-op game. 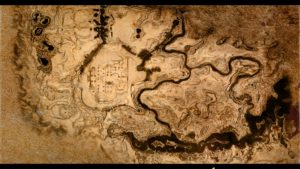 As for the controls.  they were responsive, though sometimes the graphics got stuck.  One addition to this game that I particularly liked was being able to switch between first person and third person view.  This was good when exploring and the first person worked better in battles.  Conan Exiles does have a map but it stays the same throughout the game and only shows an overview of the world. plus your location.  For the environment system there is day and night plus wind that can lead to sand storms.  There isn’t much of a weather system in-game but the night-time rotation lends to a more challenging gameplay.   One other thing is the exploration of ruins.  In these ruins are slabs with secret writing that becomes visible with contact. Moonlight really brings out the hidden writing.

Conan Exiles is a brilliant open word survival game that is currently in early access.  There is plenty to do and explore in this game and as developers add more content and fixes it will continue to provide interesting gameplay.  From crafting to building and even a modding system players can find something to keep themselves involved. Having a single player/co-op version along with an online version is the icing on the cake in this game.  Along with a  good AI and customization that adds to the experience.  There is not a lot of variety in enemies but what we do have can be challenging.  My impression was as an early access game it has a lot of potential to be a solid MMO and open world survival game experience.  Look out for a more in depth review as the finished game becomes available.  In the meantime check out the early access game and dive into the world of Conan the Barbarian.

One thought on “Craft, Build, and Conquer in Conan Exiles Early Access”