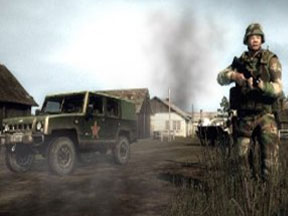 (for better or worse)

I was one of those people who was on edge waiting for the new Operation Flashpoint to come out. I played the original in 1991 and it was amazing: an open battlefield where literally anything was possible. I still remember the mission where I had to make it through enemy lines all alone, with an entire army hunting me. Years later a friend of mine told me that there was a truck hidden in a barn near the start of that level, which made getting across the battlefield a lot easier. But I did it the hard way, an inch at a time, moving from bush to bush while helicopters circled overhead and ground troops drove around in trucks and tanks trying to find me.

Of course the developers of that game were Bohemia, and they cut their ties with Codemasters, choosing to create their own combat game called ARMA. So really we are talking about a totally new development team working on this game, despite the same name. And unfortunately, Dragon Rising just isn’t as good.

The plot of Dragon Rising is similar to the original game. You play a bunch of different marines invading the island of Skira, which is about 220 kilometers in terms of surface area. There is a backstory as to why China (the bad guys in this game) are there and why Russia can’t handle the problem themselves, but it’s basically a thin excuse to create a conventional war in the middle of nowhere without the risk of the nuclear option. It’s a bit unbelievable, but easy enough to accept and move on. And the plot of the original game was a bit far fetched too.

Like in the original, the emphasis is on realism, and this I really like. There are no magical health packs to pick up and you can’t shake off being shot a bunch of times by just getting to cover and taking a breather. In fact, getting shot even one time often ends in death, even on the easiest levels.

The problem is that if you are going to have that level of realism, then you need to play fair. The developers chose to give all the advantages to the enemy AI, I suppose to make up for the fact that they are incredibly stupid. The result is that the game is totally frustrating to the point where you are probably going to only struggle through a couple missions before giving up and going to play something a lot more fun, like Modern Warfare 2.

Case in point: the enemy is able to see you even if you are standing a long way off. In fact, the first sign that an enemy is around is normally when you take a bullet in the head, or see one of your squad mates go down. The graphics in the game are a bit last generation, so that you end up scanning way off into the blurry distance and not able to see a darn thing. Meanwhile, the enemy out there in that graphical haze is zeroed in on you and taking you down without breaking a sweat. Using the sights on most weapons is useless because they provide little or no magnification. Meanwhile, it seems the entire Chinese army has been issued sniper rifles with precision German optics.

Health is also mismatched. If you do manage to hit an enemy, chances are they won’t go down right away. I’ve had to plug enemy infantry three times before they stopped moving. Meanwhile, I don’t think I ever survived being shot twice. It’s just not a level playing field, and thus, the game is not very fun to play.

Also, the emphasis is on command. As in, you need to command your squad in most missions for them to do anything. The problem is that this adds an overly complex layer onto an already frustrating game. For example, if you want your men to line up so you can get an assault ready, you need to dial into the orders menu, then select the formations submenu, and then pick the line option. If you want them to fire at will, you need to go into a different menu and follow the choices till you find the order you want. The problem is that this cumbersome process takes time, and often has to be done under fire. It’s like trying to use a phone to activate your credit card while someone is shooting at you.

And even simple commands tend to be overly complex. When telling my team to move about 10 feet into cover, I instead start yelling grid coordinates to them. Instead of "get down" I get "Squad move to Victor Beta 224 by Charlie Delta 999er." And the extra time gets them killed.

The friendly AI is also very stupid, especially with vehicles. When you hop into a jeep, your squad won’t always follow you, though sometimes they will. It’s anyone’s guess how they will react. A lot of times you have to dial into the awful command window and try to figure out how to order the squad into the vehicle you are driving. Then if you come under fire, they won’t react unless there is a mounted gun. Nobody tries to shoot out the window or the open top of the vehicle. They just sit there like it’s a Sunday drive while the bad guys are pouring rounds into the car. And sometimes when I jumped out of the vehicle, my squad would stay inside. Once they even took over the driver’s seat and tried to drive behind me as I ran for cover. No, I didn’t want you to try and park the flaming about-to-explode-truck behind these rocks.

Even individual commands are too complex for a shooter. If you come across a barn filled with enemies, a smart thing would be to toss a grenade inside. But to do that, you have to push the triangle button to open up your inventory menu. (The Codemaster’s development team really likes menus I guess.) Then to get to your grenades, you have to scroll through a bunch of other gear like your medical pack, your binoculars, demo charges and smoke flares until you find what you want. Now, even if the enemy somehow didn’t move away or shoot you while you were digging in your purse, after you throw the grenade you have to go back through the same menu to equip your gun again. Otherwise you are standing there with a satchel of grenades and not able to shoot anything.

That is not realism. It’s micro-management for the sake of doing it. What’s wrong with a trigger key to toss a grenade? Or a button to flip through your weapons? You know, like every other game on the planet? You simply can’t react fast enough in Dragon Rising to make changing weapons worthwhile.

It would be one thing to say that Dragon Rising is a simulation and not really a shooter. If that were the case, I would be fine with that. But Dragon Rising is a simulation saddled with an unrealistic command interface, middle-of-the-road graphics and both an unbalanced and woefully stupid AI. Most people who play Dragon Rising are not doing it because the Army wants them to train to invade Skira Island or attack China. Most people will play because they want to have fun. And unfortunately, the new developers forgot this fact somewhere along the way.

Operation Flashpoint: Dragon Rising earns a below average 2 1/2 GiN Gems overall. While the open world concept is a good one, it’s really poorly executed to the point where not a lot of gamers are going to have much fun with it.