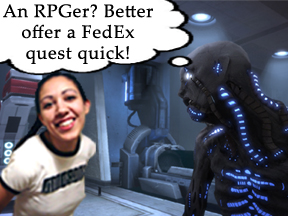 Well, I've finally done it, dear playchums. I've finished Mass Effect! We all thought it couldn't be done, but I just knuckled down and got the thing played. And boy am I glad I did. Rarely does a game deliver as perfect a balance of action, story and emotional attachment. There's a little Mass Effect shaped hole in my evenings. Fortunately, it's merely a week to wait until ME2 hits the shops and I'm ready to reunite with the cast and crew of the Normandy. A sneak peek at the latest interviews has given me cause for concern though. All may not be right with the sequel.

Just yesterday, I came across an alarming headline that read, "Mass Effect 2 sets its sights on the Modern Warfare crowd." NOOOOOOOO! In a recent interview, Bioware's Casey Hudson, Mass Effect 2 project director, has admitted to setting its sights on the MW2 crowd. Now, there's nothing wrong with that, as long as they don't leave the RPGers rolling unconscious in the gutter, stepping over them to wow the FPS gang with their latest party tricks – big guns and er, big guns.

Is nothing safe from the MW2/Halo/Gears epidemic?!? It seems the RPG must be eroded to fit the blockbuster mould. But surely one of the things that made Mass Effect great was the depth of gameplay it offered and surely that came as a result of the narrative opportunities inherent in the RPG.

Don't get me wrong, I enjoy a good FPS, after all I am the go to Halo reviewer for GiN. Sometimes all you want is an arsenal of kick arse guns and some enemies to shoot. But sometimes I want something more and Mass Effect gave me that. Although ME2 project director promises to "stay true" to the role-playing game, he's also painfully aware that he's competing against the MW2s of this world and that means combat, combat, combat.

FPS equals big bucks and in a world where instant gratification rules, developers and publishers could be forgiven for thinking that gamers don't want conversations, character arcs and micro-management of their avatar. As someone who thoroughly enjoyed ME, I for one was hoping that Bioware would be focusing on enhancing the RPG aspect of the game. Although Hudson promises that ME2 is "no less of an RPG," the focus on combat in the pre-release hype has me worried.

Yes, the combat could have done with some improvement in ME, but it didn't take anything away from the fact that I felt my in-game decisions actually meant something. In fact, the guns were secondary to my combat because I focused on the biotech enhancements. Which weapon I used had little bearing on my character and the dialogue paths I went down.

I want to see the old faces, ignite new romances and maybe some old ones. It's all about revisiting a fantastically realised world, populated with engaging and convincing races and characters. It will be a shame if ME2 just goes down the more, bigger, better route, giving us 12 more guns, 16 different vehicles and even more explosive action! Instead, let's hope it gives us more heart-wrenching decisions that mean you remember the consequences of the game long after you've watched the endgame credits roll.