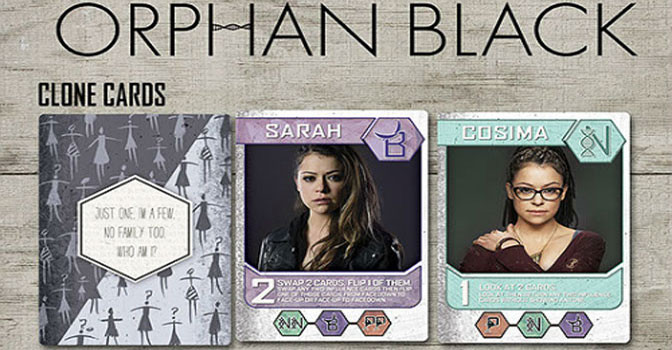 Created by the Bamboozle Brothers, a Canadian board game company made up of Jay Cormier and Sen-Foong Lim, Orphan Black: The Card Game has the same twists and machinations as the television show that spawned it. Players compete to draw clones to their faction. There are three factions; Neolutionists, Prolethean and The Black. Players appeal to clones through a strategy of Influence Cards that can sway each Clone Card to move from their “natural” faction to one that benefits the player. These cards all work under a point system.

Just like the TV show, being open about your agenda hurts your chances. Your goal, and there are nine different Goal Cards to draw, should remain a secret for as long as you can. These Goal Cards assign both your Faction and which three Clone Cards you want most. You can acquire other clones, but your goal clones are the most important. 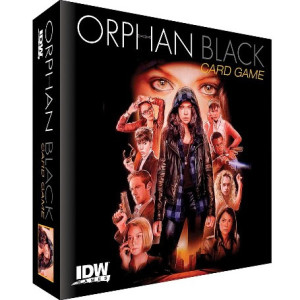 In addition to scoring points by getting clones to come to their faction, players can also get points by guessing their opponents factions. Whether or not the guess is correct isn’t revealed until the end of the game. Since your faction is tied to your goal card it helps you to keep your goals hidden during play. This end point total is a combination of points achieved by a Clone Card moved into a faction, the overall points for a faction (divided by the number of players in that faction) and guessing an opponent’s faction.

As you can tell with two different points systems, one for moving Clone Cards and one for the game’s end, the players have to juggle lots of rules quickly. The first time I played we got one of the sequences out of order and we didn’t catch it until near the end.

This complexity did not make for a casual play experience. Add to that, the cards were thin and flimsy and there were several that were cut wrong, so the images didn’t align correctly. The group I played with left it with a good feeling but not a great one. Even though one of the players was a huge Orphan Black fan, she did not enjoy the game as much as she had hoped to. She was hoping for a stronger show tie-in.

One issue could be that it was more about what faction you and the clones were in rather than it being about the clones themselves. The TV show’s great conceit is that the same actress plays all the different clones with completely different lives. Unfortunately, none of the clone’s unique qualities really make it into the game.

The game moves the clones around like mere prizes and the players take the role of faceless factions. I will say the game had some positive moments of strategy and subterfuge but its complexity never made up for its less than exiting goal. Given that it’s not a strong tie-in for the show, I’m not sure who the primary audience for this is. Orphan Black fans will likely be disappointed and strategy card game players will find better options out there.

Orphan Black: The Card Game earns 3 GiN Gems for being a rather average take on an excellent show.