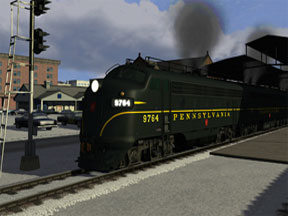 Classic sim upgrades graphics, ease of use, and fun

I think everyone likes trains. Some people, the hobbyists among us, really love them. But I think everyone is fascinated by those iron and steel beasts on some level. My friend in the Navy says trains are like ships sailing across the land, and that’s a pretty apt comparison. Controlling them is a lot different from driving your car certainly, and requires years of training to perfect.

Because people love trains so much, after flight and perhaps golf, train simulators are the most popular types of games in this genre (football and other sports type sims have become a breed of their own, and are more entertainment than pure simulation anymore.)

So Train Simulator 2012 starts chugging down the track. It’s odd when a sequel title changes its name, but in this case I think it’s justified. Train Simulator 2012 seems to be trying to run more towards the ease-of-use area this time around, though the realism is still there. In fact, even though this is like a totally different game, all of the DLCs and scenarios from Railworks 2 should perform well when loaded into Train Simulator 2012. It’s just that things with the series have improved so much that a change of name to distance itself from the older title was in order, and was probably a smart move.

Right from the start, the ease of use improvements are obvious, with a very good tutorial that takes you to engineering 101 school. Here you will practice backing trains into stations, working the controls, obeying the track speed limits and generally learning how to work both the basic and advanced features of these impressive machines. This step-by-step tutorial is incredibly helpful, and really opens up Train Simulator 2012 to those who may be completely new to the genre. Even old hats at the previous games might want to give the school a look. It’s actually kind of fun to learn how to stop on target at the station, and not 300 feet down the track.

Although Railworks 2 did well in our review, there was one area where the game got dinged, and that was the graphics. I think one of the joys of riding on a real train is watching all the scenery go by, and the previous game was pretty lacking in that area, unless you like blocky trees and nondescript skylines void of clouds. Well forget about that, because Train Simulator 2012 has gotten a major upgrade to go along with the new game engine. In fact, I would go so far as to say that these are some of the best graphics that I’ve seen on simulator.

Some memorable moments graphics-wise while doing this review include powering through a thunderstorm, with the rain beating down on my train’s windshield. I even had to turn on the wipers at one point. And yes, the wipers are needed to clear away accumulating drops. Also, creeping with a train through a city at night was pretty amazing, seeing the tight tracks running under and over the hardscrabble urban landscape, cars parked outside and people going about their business. I almost felt like it was a rolling theater just for me. Finally, there are some woodland tracks that are breathtaking with the fall foliage in full bloom and the sun glinting off the rivers and lakes in the distance.

Inside the cab there is a great illusion that you are actually moving. You don’t have to be in there, there are several views to choose from, but from inside the cabin you get the most realistic experience. Things can get pretty bumpy as you increase speed.

Now, the graphics aren’t photo-realistic or anything, other than the trains. A commuter train will have a lot of duplicate people getting off at the station for example. You still know you are in a simulator, but for a sim, things look pretty incredible.

The sound has also been improved, not that it was bad before. I know because I grew up around trains. My high school mascot was a steam engine and our sports teams were called the Railroaders. I’ve heard a lot of trains. The ones in the game are spot on. I’m positive they were recorded from actual engines. Part of the allure of trains is their raw power, and you really hear it when you nail the throttle and all that horsepower strains to get hundreds or thousands of tons of cargo moving. Even just riding through the yard, the ambient noises really give you a sense of place. You could play those sounds for someone wearing a blindfold and they would think they are in a train yard for sure.

Of course this is a simulation, not a shooter, so the number one thing it needs is realism. Like its predecessor, Train Simulator 2012 has an abundance of this. Trains all behave differently. You will get a distinctly different experience driving light rail getting commuters to work than you will a one-hundred car freight train loaded down with Pennsylvania coal. And physics are constant, so if you try to take a 30-mile per hour curve at 60, guess what happens? You’ll be lucky to survive the ensuing crash.

You can play the game in a few different ways. There are a myriad of scenarios to master, all of which feature different types of engines and trains in a variety of weather conditions and challenges. You will find that the older trains are more difficult to drive than the modern ones for the most part. And there is a career mode, where you start as a low-ranking engineer and gradually get more responsibility as you go along. Finally, there is free-play mode, where you can take a spin out in the country or plow the backwoods of your favorite state.

There is one more mode that could be considered a game as well: the creation engine. Here you can design your own scenarios. This has been made considerably easier as well, with additions of event tokens like "stopping points" that make it easy to program goals and communicate them to other players. Designing cool scenarios and the robust community that is already doing this adds unlimited replay value to Train Simulator 2012.

In fact, with so many improvements, I would say that even if simulations are not totally your thing, that you can have a great time with Train Simulator 2012. It’s relatively easy to get into, has some challenging and even exciting scenarios, and some really cool scenery to discover. I just felt really good playing it. Of course sim-heads have not been left in the dust. There are still lots of realistic trains and hardcore physics driving everything. The game was not made into a casual title by any stretch of the imagination. Instead, it strikes what I think is a pretty close-to-perfect balance of rigid simulation and entertaining gameplay.

Train Simulator 2012 earns 4 GiN Gems and a spot in contention for the GiN Simulation Game of the Year title.