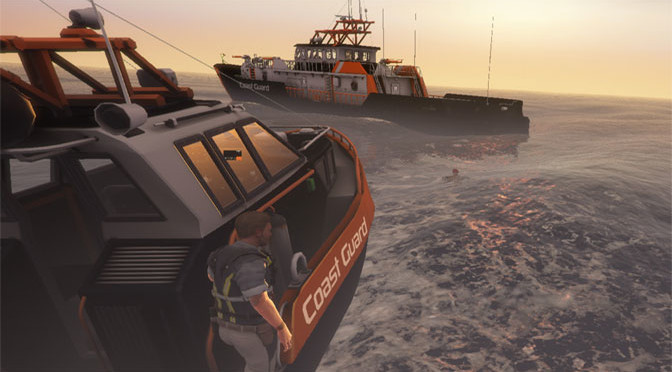 Coast Guard is an insipidly titled game about, you guessed it, being a Coast Guard. While many games choose to focus on the exciting forms of military life or that of police (or both in Battlefield, interestingly enough), this game focuses on the much less showcased Coast Guard, which is a very interesting choice. Rather than produce extrasensory overload through wanton violence, however, Coast Guard takes a much more calm approach through a third person mystery type of game.

In Coast Guard, players take the role of Finn, a director of operations in the Coast Guard who rescues castaways and tries to keep the oceans safe (but not from pirates). Finn likes to chase smugglers and solve mysteries (a la Scooby Doo), and when you’re not running over castaways with your boat by accident, you’re trying to figure out what you need to do to check a glass for fingerprints. What this means to the players, however, is that you’ll spend a lot of time operating a couple of boats while looking at the beautifully rendered water.

Water sprays jet up around the boats you pilot as you play, with realistic looking trails being left in your wake. The waves have their own physics, as well, so there is a slight learning curve as you attempt to compensate for an impending roil of seawater (especially important if you’re trying to rescue castaways, as you may wind up hitting them). The boats are well-detailed as well, with flags that sway in the wind. The same can’t be said about the characters, but then again, you should be spending more of your time slowly moving along in your boat.

Your very first time opening the game will shove you into a high speed boat chase with a larger vessel that keeps setting fire to oil on the water (well, the fire just kind of appears out of nowhere until the scene where you finally catch up to this ship). Upon catching up, Finn boards this larger ship and then wakes up in a darkened room with amnesia- this means you have to spend time solving puzzles like an adventure game set in first person view (so like the game Amnesia, but without the evil thing chasing you). The whole story begins with present-day Finn being stuck on board a ghost ship, with flashbacks leading players to discover how exactly he wound up there and how he can escape. You do have a crew, and throughout the course of the game you can interact with them. The voice acting during these events is quite grating, however, and while it may not be, “Jill Sandwich” levels of bad, it is incredibly amateur and will leave you wanting to turn the voices off- which thankfully is an option. Playing detective through a series of flashbacks does make the story a bit interesting, though the stiff delivery for several characters was bad enough to nearly ruin it.

The story is presented in a somewhat disheveled manner, but if you’re into this kind of mystery then it can leave you yearning to find out what happened next (using the past tense verb, there, because of flashbacks). General play of the game has you in first player segments onboard the ghost ship, while in other moments the gameplay will shift to accommodate rescuing victims lost at sea, putting out fires with the water cannons on one of the ships, attempting an interrogation, or escorting someone to a destination. Each of these are stark contrasts to the first person puzzle solving done in the ghost ship segments, so if you’re a fan of eclectic gameplay types in your games, Coast Guard may very well be one for you.

Graphically, Coast Guard looks great when you’re out on the water. The oil rig fire, in particular, is quite pretty and shows what the developer was able to do with their tools. Other locations, such as the darkened ship you’re in at the beginning of the game, suffer from textures that are extremely low-resolution and, as a result, look pretty terrible. The music is passable, with no tunes being particularly memorable, but the sound effects are actually pretty satisfying overall as they include effects for seabirds, but strangely don’t include any kind of noise indication that a player has rammed their boat into anything or anyone else, which is an odd omission.

There were several strange glitches, however, such as being unable to open a door that you have to go through in order to proceed (this required restarting and working back up to this point). In another case, I was unable to manipulate a water cannon needed to put out a fire that required me to aim higher. After frustratingly messing around with the controls, I discovered that movement for the water cannon was only assigned to a controller that was plugged into my computer but was not in use. This made the mouse unresponsive while attempting to operate the hose and, oddly enough, was the only control issue of its kind the entire time I was playing the game. This leads one to believe that the controller API the developer used in the game has some problems, though this review wasn’t played through with a controller so I can’t speak much more than my own experience on the issue. Some other issues are a strange lack of rudimentary features, like obvious checkpoints. More than a couple of times, Coast Guard froze during a cutscene or after an hour of play, only to discover that it didn’t save at all during that entire time period.

Mind you: Coast Guard is not a very long game as it has maybe seven or eight hours’ worth of content, but it is still very, very frustrating to have to complete entire sections again because the game saves automatically, albeit quite infrequently. Combine this issue with things such as required doors not opening or target boats on spawning, and you have a more irritating experience than it’s worth.

Overall, Coast Guard actually has a pretty decent game under its surface, but unfortunately on top of narrative-driven adventure gameplay is a heap of glitches, controls that can be buggy in places, and extremely hit and miss voice acting. The diverse gameplay types throughout the game can make it hard for a person to get through, despite being so short, so this wouldn’t be something easily recommended to someone who just wanted to play a first person action game. Those who appreciate variety and are extremely forgiving of glitches may want to look into Coast Guard. The game itself isn’t bad when you’re able to play it, but there are some small problems here or there that reduce overall enjoyment of the title, so everyone else may want to spend their $20 elsewhere – at least until the game has been suitably patched.