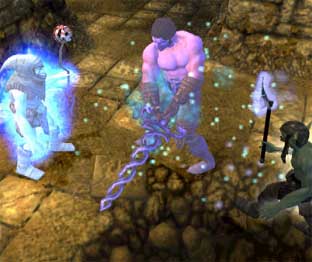 I am not sure if Interplay likes or hates Snowblind Studios. Just as Interplay was releasing their amazing title "Baldur’s Gate: Dark Alliance II" from developer Snowblind, Sony was releasing Champions of Norrath by them as well.

And get this, at least as far as the interface is concerned, the games are pretty much identical. I handed the controller to someone who played Dark Alliance II and told them the controls were the same, and they needed no further instructions to attack, block, drink healing potions, rotate the camera and other basic functions.

Champions of Norrath uses Sony’s Everquest-like system for leveling up characters while Baldur’s Gate uses the official Dungeon and Dragons’ system, but the games themselves are almost interchangeable. There is even a similar dark elf woman in a similar pose on the front cover of both games.

But if I had to pick a favorite between the two, I would say Champions. It seems like Snowblind really tried to improve on Baldur’s Gate and make a better game for Champions. Not that there was much wrong with Baldur’s Gate, but Champions adds more playable characters, an online interface and better graphics.

Champions is best played with two people, or four people if using a multitap device. Like Baldur’s Gate, both characters can be on the screen at the same time working together. This is by far the best way to enjoy a console system. No split screens please. Also it is very cooperative because helping one character level up and find good weapons helps the other one too. If the person watching your back has a kick-butt sword, it will only help you out in the long run, though there might be a bit of bickering over who gets that shiny new magic item you just found. Since I play with my wife, I pretty much just give all the cool stuff to her.

You can zoom the camera in really close when you are playing a single player game, which is cool because you get to see how good the graphics actually look. However, when playing in two player mode you can’t zoom. The world does not look as good pulled back to the default two-player setting. You can get used to it, and it does look ok, but the zoomed in quality is much, much better.

The general plot of the game is that the wood elf kingdom is under siege by nasty orcs and other baddies. This is a bad omen for the entire realm and you have been called to help save the day by blazing a bloody trail of destruction.

You can pick one of five character classes, and you can be male or female. Once you have selected your character, you get to configure their hairstyle and general appearance. This is cool because it lets you customize your character a bit, which helps distinguish yourself from your partner, even if you pick the same class and sex. You can have two female barbarians and they still can look quite different.

The characters are pretty varied. Some are all melee fighters with limited magic, some are all magic. A few fall in between or have strong splinter skills like archery or specific magic realms. Once you have your character chosen, you can add points into their four basic stats of strength, intelligence, dexterity or stamina. Whenever you level up, you get three more points to add in, plus you can buy new skills off of an interesting skill tree that makes picking the right skills a breeze.

The game is pretty linear in nature, but there are a lot of side quests and even entire side dungeons along the way. You are basically always following some main path through the forest or the desert or whatever, but if you keep your map open you might notice a few splinter paths too. Sometimes following them leads to some treasure or a grove of monsters, but sometimes it leads to entire dungeons you can explore that are optional. So as not to miss anything, most players will probably want to explore every nook and cranny in the game.

The game does a nice job of giving players a paper doll type of equipment interface. As you equip new armor and weapons their appearance changes. Sometimes you will find yourself temporarily equipping an inferior weapon just to see what you look like holding it.

The sound however is the one minor flaw with the game. For some reason the sound files seem to take a long time to read. So you will walk up to someone and their complete speech in text will scroll on the screen, but they won’t start talking for about five seconds. Pretty much every character in the game has some good voice acting to go with them, and it’s too bad that you have to wait so long to hear it. You end up just pushing "X" and skipping the voice most of the time.

There is also no jumping in the game, but before you think this is a negative, I actually think it is a good thing. Though I miss jumping through water and stuff like I did in Dark Alliance, the lack of a jump function gives Champions two advantages. First, it means you have two keys, Circle and Triangle, where you can hotkey spells. Key a spell to those keys and when you need it, you can blast your opponents with magic as easy as swinging your sword. Secondly, the lack of a jump function means there are no hideous jumping puzzles in the game. RPG players want to hack monsters, not jump from ledge to ledge for hours on end. Save the jumping puzzles for Sonic.

Online the game is a lot of fun, though you can enjoy this title completely and thoroughly without ever touching the online capabilities. If you don’t have anyone handy at your place to play with, then online can give you access to the awesome cooperative multiplayer abilities.

The game must be popular, because a sequel has already been announced for early in 2004, which is great news for those looking for more cooperative multiplayer games on the PS2. The game itself is extremely long. It will probably take you more than 40 hours to run through the entire thing, especially if you are doing all the side quests. Then you can always play again on a harder level or try to run through it again with the other characters, or find people to fight with online. So there is a lot of replay value here too.

Champions of Norrath becomes the conquer of the console RPG genre. Other than some minor sound issues, this is about as good as gameplay gets on the PS2. Champions gets a well deserved five GiN gems for their treasure chest and a hearty recommendation from us.