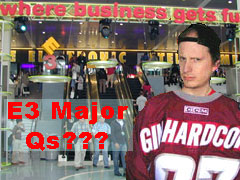 Yes, that time of year has come again! By the time you are reading this, I will be on a plane heading towards Los Angeles for the Electronic Entertainment Expo. Although last year's E3 was a slight disappointment, the debut of several new handheld consoles should make this year promising. So promising in fact that I have come up with ten questions that I hope to get answered by Friday's end.

These are the major questions that E3 needs to answer for gamers.

1. WILL PS3 AND XBOX NEXT BE ON DISPLAY THIS YEAR?

Most likely we will not be seeing early specs of the next generation Microsoft and Sony consoles this year. If they should happen to be on display they will be hidden under opaque bulletproof glass and guarded by a minimum-wage rent-a-cop who's only known words will be "appointment only."

Rumors are about the press announcement will be Sega's return to the console business after betraying Dreamcast owners three years ago. A Dreamcast 2? I do not see it happening.

After all this is the same Sega that hired Bernie Stolar, who denied US Saturn owners the best games the system could have had (X-Men vs. Street Fighter with 4 MB RAM cart, Thunder Force 5, Silhouette Mirage, and countless others), as well as the same Sega who lied to Dreamcast owners about Shenmue 2.

Instead I have my own theory regarding the "big a*s" announcement, and that is that Sega and EA are going to merge! I know it seems far fetched, but my theory involves the football franchises that both systems own.

As we know, two years ago Sega Sports acquired the ESPN license, and last year was renamed ESPN Videogames. ESPN is owned by the Walt Disney Company. In addition, keep in mind that Disney also owns ABC, where Monday Night Football is broadcast (and John Madden is a color commentator for).

Still sound hard to believe? Consider this as well. If you watched NFL Primetime or NFL Countdown on ESPN, or even last month's NFL draft, for that matter, who was the sponsor for those broadcasts? ESPN Videogames? Sega Sports? Wrong on both counts; it was EA Sports! In fact, the ads for Madden NFL 2005 debuted during the NFL Draft!

In addition, considering that EA's biggest antagonist of Sega, John Riccitello, recently resigned, talks between EA and Sega might have built up in the past few weeks, leading to this big announcement.

The Madden series has always been praised for its high standards of gameplay, and many football purists have favored the series over ESPN's; even the pros lean towards Madden. However, the presentation needs a serious makeover, as it's used the same graphics and commentary for the past 4 years, and that's something that ESPN NFL can provide.

It would be a dream come true if a EA Sports/ESPN Videogames merger came true, and Madden/ESPN NFL would definitely benefit from it.

3. NOW THAT THE PHANTOM'S SPECS ARE FINALLY REVEALED, WILL IT SELL?

After harsh criticism by the press, including an article by HardOCP that resulted in a lawsuit, Infinium Labs finally got off their rears and revealed an updated build of their Phantom system. The specs sound impressive: an AMD Athlon XP2500+ with 256 MB RAM, a 40GB hard drive, and a GeForce FX 5700 Ultra. However what gets me is the way Infinium is offering the system: they are giving it away for free as long as you commit to a two year service contract at $30/month. There is also the option to purchase the system without a contract for $200, but if you look at the contract, why spend an extra $500 plus for the system?

Not only is the system pricing interesting, I am not really impressed with the idea of obtaining games by broadband. Seeing as how games take a long time download even with broadband (the latest Final Fantasy XI update took over an hour to download), waiting forever for a game to install can be a pain. At a recent meeting with Infinium, they said they found a way around this problem, which will be demonstrated at E3. I look forward to seeing this work.

4. WHICH HANDHELD WILL BE THE MORE DOMINANT: THE PSP OR THE NINTENDO GAMEBOY DS?

Initially, the PSP will have the upper hand. We have seen an actual production sketch, as well as details of the first game (Death Jr). However, Nintendo is known for surprises, not to mention their GBA lineup has a stranglehold on the handheld game market.

While there is no doubt that both games will display new trailers at this year's E3, no one wants to see simple footage anymore. We want to play them!. Just think if Valve didn't make up that story about a "code leak" last year, we would have already played Half Life 2 last Christmas.

And as for DOOM3, the game has been in development for three years, back when we heard Steve Jobs bragging about the GeForce3 debuting on the Mac (always full of hot air), but all we got in the last year are several screenshots and one trailer last year. I'm tired of seeing constant delays on DOOM3 just so it can have the minimum requirements of an eventual 3GHz Pentium V.

Oh well, at least the Xbox version of DOOM3 will be playable, thanks to Vicarious Visions.

6. WILL THERE BE AN END TO THE MMORPG OVERKILL?

We can blame this on the success of Evercrack, Star Wars Galaxies, and Final Fantasy XI. One out of three press releases I have received over the last few weeks regarded an MMORPG, with Matrix Online (now being co-developed by Sega) leading the charge. I know that MMOs are very popular, but do developers think we are going to spend at least $10/month for each game they play? Not many people can afford such an expensive habit.

In the last few years we have seen a downfall of PC exclusive titles. I feel the transition will continue. Even with PC dominant genres such as first person shooters and the previously mentioned MMOPRGs, the transition over to console makes it difficult for the PC faithful.

8. WILL THE N-GAGE QD MAKE UP FOR NOKIA'S PAST FAILURE?

Last year, the Nokia N-Gage launch went virtually unnoticed. The game deck itself has been a subject of ridicule, be it from websites, or being referred to in magazines as the "Gigli of gaming."

Nokia vows to make up for their mistakes with the QD, which includes a face speaker phone (eliminating the side-talking craze), an improved button layout, and most importantly, a top loading card slot. No longer will we have to turn the system off and pop out the battery to switch games.

But still, this doesn't change the fact that the N-Gage has a very sub par software library. No title available currently gives me the desire to want an N-Gage, and I doubt there will be any this year that will make me change my mind. But I am meeting with Nokia, so lets see if they will impress.

9. WILL THE MINOR CONSOLES PROSPER?

Again, this is a tricky question. After all, in the last few years we've seen the failures of Project X/Nuon, the Neo Geo Pocket Color (a system which sadly deserved to be treated better), and the Indrema. In addition to the previously mentioned Phantom and the N-Gage, companies such as Tapwave and Gizmondo will be fighting for a spot in the handheld market. Against the juggernaut known as the Game Boy Advance, it will be a very uphill climb. I can only wish them luck.

10. WHICH GAME WILL GET BEST OF SHOW?

DOOM3, Half Life 2, Splinter Cell 3, Metroid Prime 2, Metal Gear Solid 3? While there are so many A-list titles listed, one cannot tell until we see the actual games.
Over the next three days, I will provide first hand account of what I come up with at E3. Trust me, it will be well worth the wait.