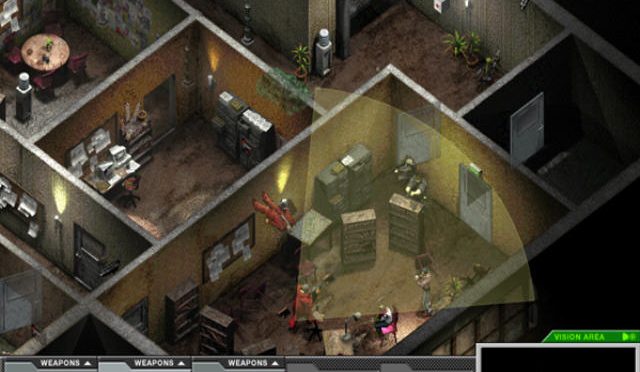 Beyond the Law: The Third Wave

Beyond the Law: The Third Wave takes place in modern times. The plot of the game is that organized crime has gotten so bad and formed such a diabolical plot, that the very security of the United States is in jeopardy. As the leader of a group of mercenaries, you are authorized to stop the bad guys using any means necessary, so long as you do it in secret. Given the world situation, it does not take much imagination to think that these types of missions might actually be occurring in the shadows around us right now.

The game is played using a top down interface that lets you see the entire level you will be working on from the start. The levels themselves are intricately detailed, apparently hand drawn, and high quality. You will see guards walking patterns, taking a break to talk to their pals and generally being good little criminal guards.

Before you get you your mission screen however, you need to handpick your team of operatives. There are several different specialists to choose from, each brings different equipment and different skills to the table. Each one also charges a different amount for their services, so you will have to keep within your budget for each mission too.

Once you read your mission brief, you can pick your team. Technicians can pick locks and disarm security systems, but generally are not too handy with a gun. Bodyguards are tough and can bring almost any opponent to the ground, but are lousy at stealth. Snipers can kill from a distance, but bring limited ammo and functionality. You have some all-in-one characters too that are good at everything but not perfect at any one skill. And generally the more skilled operatives cost more.

The game is played very much like the classic Commandos series, where you have to find breaks in the guard patterns and sneak your team through. Or perhaps you can use a silenced pistol or knife to eliminate guards on the perimeter and move in that way. Though it takes a little time, hiding the bodies as you go is a live-or-die tactic.

Your skilled team is pretty good, but if the guards see or hear something suspicious the game gets difficult quickly. In fact much of the games level setting simply changes how good the guards can see and hear. On easier levels, you can beat up on a guard his buddy probably won’t even know you are there. On harder ones, they both might hear you moving in the shadows behind them and head over to investigate. So you can set the game for your style of play and realism.

The levels themselves seem impossible at first glance. With cameras, lasers, guards and locked doors, it’s pretty daunting at first. But as you study the scene, you will find little breaks in their armor to exploit. Taking out a guard at just the right moment can open up a hole without being noticed, but only if you execute your plan flawlessly.

The environments seem realistic and are varied. You will find yourself in New York and Washington DC. Missions include rescuing hostages, disarming bombs and destroying terrorist assets.

The one thing I did find odd was that the bad guys are never actually referred to as terrorists. They are supposed to be mafia guys I guess, though planting nuclear bombs in DC and sneaking ships filled with guns and explosives into the country seem more the bailiwick of terrorists. I’m not sure if the developers did not want to make the game too realistic or what. This is not a stopping point, but in your head the bad guys will seem like terrorists and not street crooks.

he soundtrack for the game is very good. It’s appropriate for the different missions and kind of combines a bit of subtlety with urgency. You don’t notice it a lot, which is perfect for a mood setting score.

The game runs well on most PCs with Windows 98 or better and on Macs with OS X. The game runs off a hybrid CD, so you can have a lot of fun regardless of platform. From a Mac point of view, this is one of the best games you can buy. In the more crowded PC world, players will find Beyond the Law an excellent value well worth the money. Expect at least 16 or more hours of gameplay as you complete all the various missions, gaining one stealthy inch at a time.