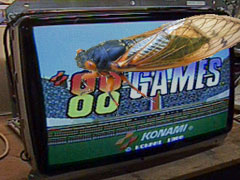 This week the nation, and especially the Washington DC area, says a fond farewell to one who rose up from humble beginnings to join a chorus of millions that left their mark wherever they went.

You can take your hand off your hearts. Unlike everyone else in the world today, I am not talking about President Ronald Reagan. I am talking about cicadas.

For those of you who don't know or live where they don't exist, cicadas are fascinating insects that live underground quietly eating tree sap unseen for seventeen years. Then on a warm summer day they burst from the soil making a terrible racket. They mate, lay their eggs, and die. They are above ground singing for only about three weeks. Not a bad way to go I guess. But we won't see them again for 17 more years. So like comets or DOOM sequels, their infrequent occurrence is cause for celebration, or at least speculation.

So I thought I would give it some thought and come up with a brief list of awesome computer games that I might have played with the parents of the current generation of cicadas. These are games that have influenced my playing tastes over the years and I hope these reflections give you a moment or two of satisfaction as you remember them, or perhaps your own list.

Also, I am going to play a little loose with the actual dates, so please don't yell at me and say that a game did not come out exactly in 1987, the time of the last cicada revival. Let's say I could have played these games with some early arrivals and a few late bloomers.

You walked through this green maze and entered turn-based combat with monsters that you encountered. You could go down a total of 256 levels, though I only ever made it to 100 or so. There were also lots of hack-like game powers, like the ability to warp through walls. It was hours and hours of fun before Miami Vice came on.

Adventure: Ok, this game is a real stretch for this column since it came out early, but it is so good I figured I would include it anyway. For a game on the Atari 2600 it was really detailed, even though you were just basically a square running around a little 2D maze. But hey, you were being chased by dragons and a flying bat! And if you won, the screen blinked in many different colors.

Stonekeep: So the game did come out in 1996, but I think I originally heard about it in 1987. Up until recently, Stonekeep was famous because it was the most delayed game to ever actually be released. It literally took the programmers five years from their projected release date to actually send the game to stores. It was an adventure game where you explored a vast underground keep. And it ran great on my 486.

Ironically, I never actually liked Stonekeep very much, though I keep the awesome hologram box from the game in my office. But it did teach me that sometimes you have to wait a long time to get a good game in this industry. When newcomers complain that their hope-to-be-favorite game is delayed, I just laugh and remember waiting for Stonekeep year after year.

Starflight: This one pegs the timeline just about right, with a 1986 release. And until very recently, held the spot in my heart for Best Game of All Time. Of course those of you who read my reviews and columns from time to time probably know that Morrowind takes that crown now, but Starflight I suspect will always be in my top five favorites, if not my top three.

The Starflight world was the first completely non-linear one that I ever experienced. You could literally take your crew and fly anywhere in the universe. You could visit any solar system, there were hundreds in the game, and then land on any planet at any point and explore. You could hunt exotic animals to sell as pets, you could mine minerals to sell, you could trade or fight alien species or follow the main plot put forth in the game.

Friends and I traded coordinates of interesting things we found at school, and knowledge of an artifact's location or an interesting planet was a hot commodity. The gameplay convinced me that non-linear play was the wave of the future, in sharp contrast to the popular side scrolling and heavily scripted games of the day.

Tex Murphy: Mean Streets: The Tex Murphy game series started in 1989, and continued for five games. I liked this series because it was like a puzzle game, but with adventure elements. In truth, the Tex Murphy game called Martian Memorandum, released in 1991, holds more sway with me because it was one of the first games that I played on a date. I know it sounds geeky, but my girlfriend at the time and I would go to dinner and then head home to play Tex Murphy. I guess it was a good way to get girls to come back to my room in college. What can I say, it worked sometimes. Thanks, Tex. Perhaps some of you cicadas should take notes.

Trade Wars BBS: Before the Internet was in every home, people still networked. by logging onto bulletin board systems at blazing a 2400BPS speed. You would not play a game with someone normally, but could log into a game, make a set number of moves and then log out. If you played every day and other people did too, then you could have a real competitive experience.

I think that Trade Wars more than any other BBS game, with the possible exception of Murder Hotel, convinced people that a shared online gaming experience was possible. Soon after Trade Wars popularity pegged, programmers began experimenting increasingly with direct-connect games, or ones where you would dial into a friend's computer and challenge them one on one. The next step of course was Internet gaming, which is almost a standard component of every game made today. But it had a humble green screen beginning that holds fond memories for those of us that were there.

So as we bid goodbye to our friendly cicadas, I can't help but wonder if 17 years form now I will be writing about the "classic" games of today. Who knows what the future holds? Virtual reality in the home? Direct game chip implants into your brain? Rocket cars?

Sorry about that last one, I got carried away in a "1950's Future Vision" kind of way. But suffice to say the next generation of cicadas will find a computer gaming world as different as todays must seem to the last generation. So hurry back friendly insects and let's see what the future holds. I can't wait.