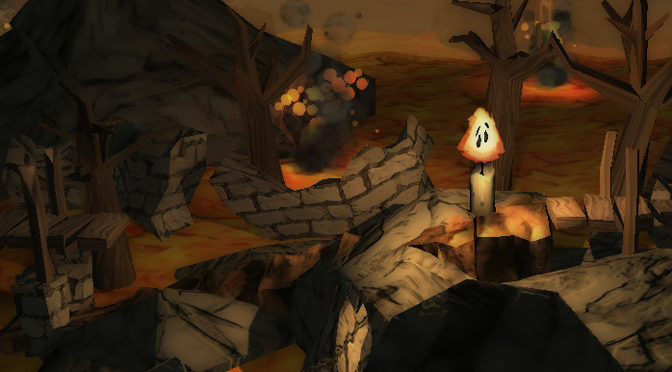 When you review a video game these days, especially an independent one, you’re more likely to learn about the developer. Since you’re dealing with smaller teams in the indie scene it’s generally a little easier to get to know the designers when you’re dealing with a behemoth publisher. Based on their stories, you end up rooting for some of these in particular. Such is the case with Rod Moye, the sole developer for Pixel Maverick Games. The guy couldn’t be nicer, and he spent three years of his life developing this game on his own. The gamer nerd inside you wants a monumental effort such as that to be rewarded.

However, video games are products. No one cares how many people developed a video game or how much money it cost. There’s only one question that needs answering: “Is the game any fun?” Thankfully, Candlelight is indeed a great platforming romp, and the three years Mr. Moye spent on the game were well invested.

The game begins with a very clever narrative. An evil smoke monster has blown out all the candles on Earth, and now the world is cast in darkness. Our brave little lit candle hero must side scroll his way to planetary redemption by reigniting all the candles of the world. However, to stay alive he must stay ahead of his burning wax, which drips away as he storms through the levels. Wow, water traps are dangerous for a real reason now!

From this premise you can then enjoy the 15 levels the game sets up for you, which all feature three temples, hidden candle shrines and secret levels.

The game does add many of the elements we’ve come to expect from side scrolling platformers. To be critical, there are times Candlelight introduces a new move or power without much context. This won’t bug more experienced players, but if you want your kids, nieces, or nephews to play a great platformer these difficulty bumps could really throw them off.

That is really the largest criticism you can lob at this game: It deters the very audience it’d be so perfect for. It’s fun enough to provide an enjoyable time for those of us who miss the 2D platformers. However, it would have also been a perfect title to show younger members of the family what was so fun about the SNES titles of old. Instead, the difficulty levels ramp up and down all over the place. Random sections will require precise timing, while other levels will be much easier.

This is confusing, because the rest of the game is very polished. It’s remarkable this was created by one person. The gameplay generally is fluid and engaging. The wax-timer fails to create much tension, but more casual audiences will certainly appreciate a mild challenge as opposed to a severe one. Not every independent platformer has to be controller-busting in its difficulty. However, one wonders if it was possible to dial up the difficulty in some separate modes to create more value for the seasoned consumer. How hard would it have been to program that wax timer to run a little faster?

Rod Moye does include a great deal of collectibles and a death counter. The death counter idea is really a fantastic inclusion. A game doesn’t have to be destructively difficult to rope the hardcore gamers in. It can be a normal challenge with several additional conquests for the gaming greats among us.

Unfortunately, there’s not an online leaderboard for showing your completion rates and low death counts, which would have added some replay value to the proceedings. Instead, these young whippersnappers are going to be forced to brag in person.

There’s also a map which features many of the game’s collectibles in it. Some will question if this makes the game too easy. Other casual gamers will surely enjoy this more, as they likely do not have the time in their schedules to scan and backtrack endlessly.

The graphics have a number of nice touches, but they also provide some frustrations. The game uses a darker tint to the levels, allowing our candle friend to illuminate the world around him. The mechanic works for the most part; this is a very good looking indie title. The animations of the hero are adorable enough to make him endearing, and no doubt he will work his way into many a gamer’s heart. The only problem arises when the levels are a little too dark to see the dangers. You can adjust the brightness in the settings, but it’s hard to get the levels just right. A number of layouts also look very similar, and the darker lighting contributes to the feeling of sameness.

The game really sews together its setting with the sound design. The music is very fitting, without an errant note in the mix. The island tunes are especially relaxing. The cuteness-overload sound effects really help our main character become more likeable. Yet, the audio editing for the end of a level is awkwardly edited. If you sit down your controller to tend to something else, you will be greeted with an off-kilter loop. The sound effect for when you collect wax is also bothersome after a while.

Speaking of controllers, this is where Candlelight really shines. The onscreen instructions are simple to follow, and are really helpful with casual players. They allow anybody to pick up a joystick, play, and learn some more complex mechanics.

In its totality Candlelight is a fairly cohesive product. It stumbles in its delivery of a solid difficulty curve, and it has it’s flubs in other departments, but most platforming fans will enjoy themselves enough to not care. The multi-layered levels provide a thick onion to peel back for fans of the genre who are not looking for their next epic entry, but more of a sweet joyride through a charmingly conceived world.

Recently, the price of Candlelight was reduced to $9.99, making it a great purchase and good value for anyone who enjoys the genre, and can be patient with a few blemishes.