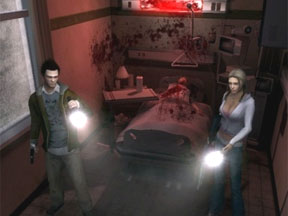 For a more complete review of Obscure: The Aftermath on the PS2,
you can click right here and read all about it.

There’s a strong desire to hate Obscure: The Aftermath, as it seems to be a representative in games for what’s been going on in the horror industry for the past couple of decades with Freddy, Jason, and all the rest.

With these types of movies, horror began reaching out to a twenties/late-teen demographic (not to mention younger people who wished to associate themselves with that demographic), and focused on marketing the surrounding story to reach these particular viewers rather than making terrifying films. Sex, drugs, alcohol, mischief, violence: All present for no more reason than to make a quick dollar.

But back to Obscure. With the opening title’s happy-go-lucky music, I was ready to pull my hair out, thinking that I’d be suckered once again into expecting a passable title of chills and thrills. I mean, the story takes place in college dorms and frat houses, and the dialog consists of "Get lost, and take your bimbo witcha." Not exactly inspiring.

But playing further into the game, my worst opinions of Obscure: The Aftermath were put to rest and I found myself actually enjoying the experience, because, as I found, this game is bent on taking a players expectations and destroying them with a plot that doesn’t shy away from terror in the visual or psychological sense.

In regards to gameplay, everyone in obscure has their own unique talent-one character can jump, one can move heavy things, one can hack, and once can decode-but for some unfathomable reason no more than two characters can go anywhere at once, even when they are all heading toward the same destination. Because of this factor, there is a bit of backtracking that eats at a player’s patience, but these hassles are few and far between.

For the most part, the puzzles are, at times, challenging. And the addition of side games such as password decoding and lock-picking are welcome and often engaging.

What has made the game stand out among others in the horror field is the option to either play alone or to share the experience with a friend. Two player horror survival games are indeed rare, but for the most part the ad hoc experience is going to be put to the wayside in order to get through the title on your own.

The best part about this particular game, however, is that it is on the PSP! On my shelf, there are only a handful of games for the PSP and these consist of God of War: Chains of Olympus, Metal Gear Solid: Special Ops, and Silent Hill: Origins. Of all the other games I’ve played with the PSP, they’ve either been horrible, terrible fighting games, card-based games, or uninteresting RPGs.

To find a solid adventure title seems to be a rare happening on this gaming system, but with the release of Obscure: The Aftermath, we have more evidence that it can be done, and done well.

Hopefully, that will clue other developers in to this handheld’s major lacking factor and prompt them to give us more of this type of experience in the future; possibly creating a nice exclusive in the process, instead of just another port.