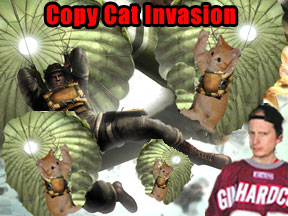 Ok. Have we talked too much about Modern Warfare 2 yet?

Look at our site the last few weeks: my review, Chella's column last week about the British press trying to spin their comments about MW2, a full GiN Lounge about the controversy of "No Russian," and just yesterday, our latest GamerGeeks ending with our obsession with the game. Heck, even my own dear co-host is sporting an AK-47, and acting like she's not afraid to use it!

I'm just going to tell you now, Kelly, once and for all"NO RUSSIAN!

In the twelve years I spent writing and podcasting for GiN, no other game I have played has achieved as much attention as Modern Warfare 2. I'm sure that when I return from MAGFest in January, and Kelly and I record our next GamerGeeks, that MW2 will again be a major bullet point as one of our Top 5 picks of the year.

But can you blame us? We are talking about a game that in 24 hours sold nearly 5 million copies worldwide, and earned over half a billion dollars in five days. And I'll go ahead and once again put up my flame shield to say let's see Halo 3: ODST do that!

But unfortunately, as I can hear Nate say during a typical GiN Lounge podcast, the game industry is a business. And in being a business we know what will come next. We got a very successful game, critically and commercially in Modern Warfare 2, and what comes next? That's right. Bring in the copycats.

Remember how we went through this when both Guitar Hero and Rock Band came out? What was the result? Guitar Praise, Wii Music, Ultimate Band, and of course, our resident punching bag, Rock Revolution. All of which failed to achieve even a fraction of success.

Now we have shooter reboots coming out that are attempting to capitalize on MW2's glory. First off, we have 2K Boston trying to resurrect the Spec Ops series, originally a budget series on the original PlayStation known for getting very low scores. One has to wonder why anyone would try to resurrect such a critically panned series, unless it's just for the $$$. More details are to be revealed during the December 12th Spike VGAs, but as far as I'm concerned, yawn.

But still, even that attempt at a cash in doesn't sound as bad as what I came across yesterday. It turns out the Lord of the cash cow, EA, is also deciding to reboot their Medal of Honor franchise to fit the modern warfare era in a new title developed by their EA Los Angeles team.

Now wait a minute, isn't this the same EA Los Angeles team that was responsible for the Medal of Honor franchise after Allied Assault? If so, why would they want to reboot a franchise with a team whose successive titles became more inferior in terms of quality? And need I remind you about how bad Rising Sun was, more so after baiting me with an amazing Pearl Harbor mission?

No matter how much EA claims that the new Medal of Honor reboot will provide a "best-in-class single player campaign," it still sounds like a cash cow attempt at the hands of Mr. John "the dollar we spend on a Dreamcast title is one less dollar spent on a PlayStation 2 title" Riccitello, and we know that even with upstaging a nuclear detonation, there is no way this game will even think of beating Modern Warfare 2, or even the eventual MW3 when it's released. Especially when you consider who was responsible for the excellent Allied Assault"they now work at Inifinity Ward!