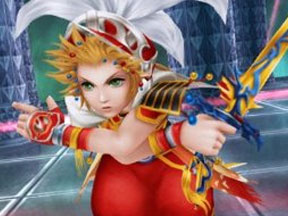 All Others Need Not Apply

Let’s say you’re not a fan of Final Fantasy-I know, I know, seems crazy but roll with me here. This could be interesting.

Let’s say you’re not a fan of Final Fantasy, have no idea what it has to offer and, oh my, it seems that you have a PSP and the newest release of Final Fantasy: Dissidia has been given to you. What do you write about?

I hate Final Fantasy. I hate it so much, and I don’t even know why other than to say that this disdain seems to be fueled by fanboy masses and the ever-growing ridiculousness of the franchise. Because of this, I’ve tended to stay away from the series through all its incarnations and shifts in visual progression.

This streak was severed with the arrival of Final Fantasy: Dissidia on the PSP, and now that I’ve subjected myself to the title, I have to say that if I could turn back time and not waste any minutes on this game, I would take that step without hesitation.

With the exception of Fallout 3, I am not an RPG player, and anyone paying attention to my reviews of fighting games should know that I believe that this particular section of gaming is the largest waste of time.

With FF:D, sadly, I’m getting the best of both worlds.

A fighting game RPG mash-up! I must have died and gone to gamer hell. What could I have done wrong to deserve such a terrible punishment from our Chief Editor Extraordinaire? Amends must be made to Mr. Breeden, gift baskets must be sent. This can never happen again.

But why? Why was it such torture?

From the start, the game explains that some chick named Cosmos is in a bad spot in regards to an enemy named Chaos; a classic struggle of light and dark forces, and at the moment, light isn’t doing so hot. This is all told in the CG opening, which despite all my negative feelings for the series, was certainly impressive to watch on my PSP, and that goes for the rest of the game, as well.

Yes, to its credit, FF:D pushes the PSP to its limits graphically. It’s all the rest that keeps my attention straying away, because as the gameplay begins, I find myself playing the same level over and over again in the hopes that it will lead to a cool payoff that never seems to arrive.

Now, I have no delusion that if I had even the remotest of clues as to who these characters are or what their ultimate motivations were, I would have enjoyed Dissidia much more and given a pass to the bad gameplay; however, I don’t, so I didn’t.

Plainly stated, this is a side product to feed all the fans of the series that can’t wait for yet another FF title to appear on the shelves. That said, Dissidia will certainly fill that void nicely, as it takes into account a huge array of characters from the series’ entire span. However, that interest is purely self-contained and leaves hardly any wiggle room for a player just beginning to get interested in the franchise.

And strangely, I’m not sure that’s entirely a bad thing.

A number of games have held me for the long term, and I’m not so sure I would be happy if each title went back to the beginnings of the story just to catch everybody up on the basics.

So it all boils down to a case of "If you are a FF follower, odds are you already have this game" but if you are a newcomer to the entire line, I’d say pass. There are better games out there to play, and that’s saying a lot when in reference to the PSP.