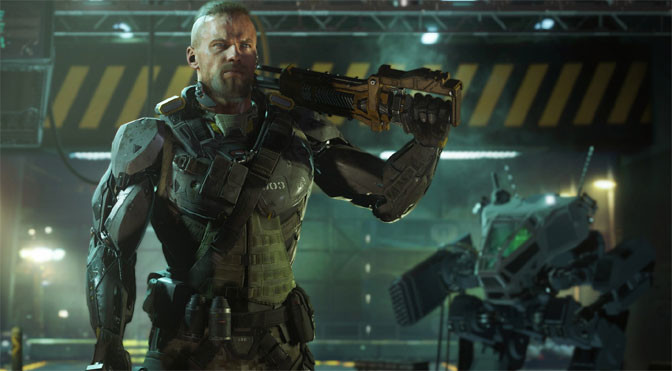 Confession: I have never played a Call of Duty game. Because of this, we thought it might be interesting if I played this one, because with a huge franchise, it’s nice to let a player that might be jumping in for the first time know what that’s like. I turned on Black Ops III with little in the way of preconceived notions. I haven’t played a lot of war games per se. I’m an enormous fan of the Elder Scrolls games, and the prospect of Far Cry Primal makes my heart go pitter pat, but somehow, I just haven’t played Call of Duty or Gears of War.

Imagine my delight when I was allowed to play as a woman in realistic armor no less. Score one for Activision. I was also offered the option to tone down the gore, which was nice, but I declined. Then Christopher Meloni shows up to train me. Okay, so in the game his name is John Taylor and sure he’s a little villainous, but hey he’s also Christopher Meloni from Law & Order: SVU and Wet Hot American Summer and he can train me in how to be an augmented human anytime he wants to.

Then Katie Sackhoff shows up for more training. I love Katie Sackhoff. She was a great Starbuck in Battlestar Galactica and she’s awesome in Longmire, so I’m liking this game. Generally, I don’t like it when I recognize actors in a game, because it throws me out of the world, but I’m not super involved with Call of Duty, so I like it. If Katie Sackhoff shows up in Elder Scrolls VI, I might not feel that way. I am kind of hoping Christopher Meloni shows up in Far Cry Primal in a loin cloth, but I digress.

So Black Ops III is about your character becoming an augmented human after a serious injury in battle. In the world of Black Ops III, corporations rule the world, and naturally, they don’t have anyone’s interest at heart but their own. This is thinly veiled social commentary about the power of multinational corporations in our own world with a healthy dose of fear of technology thrown in for good measure. Is technology outpacing our ability to understand all the implications of using it? Maybe, and in the world of Black Ops III those are the central issues. The storyline is good and the game the story is woven through is solid.

Gameplay is excellent as it should be in a franchise of this magnitude. There is, of course, a vast array of weapon options and augmented skills to learn and unlock. Players can change out their weapons load to suit the situation and combat works smoothly and fairly intuitively, even if you’ve never played a Call of Duty game before. The tutorial is seamlessly built into gameplay and the story, so there is never a sense of wanting to move on to the real game. That sort of smooth integration is the hallmark of thoughtful design.

In addition to the campaign, there is a massive online game to play. The multiplayer game allows for additional specialties that can be unlocked for customized play, which is fantastic if you care about playing online with a bunch of people. Alas, I couldn’t care less about multiplayer versions of a game, any game. I don’t even like the Elder Scrolls Online, and if that can’t get me to enjoy multiplayer online, nothing can. Nonetheless, if you want the full multiplayer experience, Black Ops III has it and then some.

And then there are the zombies. From what I understand, killing zombies is kind of a trademark of the Call of Duty games. I don’t know what it was like in previous games, but in this version, it’s pretty awesome. First of all, there are actually two zombie choices, the big amazing zombie game and a little old school spinner zombie game that is a joyful little Easter egg, game within a game, to be found in a back room of the command center. Go to the central hub and start clicking screens in the side rooms and you’ll find it. I’m not going to say more than that, because it’s fun to look for it, but that’s just a side thing.

The main zombie game is right on the main menu under multiplayer. In this zombie game, called Shadows of Evil, the player is sent back to the 1940s, and it’s a film noir Cthulhu meets The Walking Dead kind of thing. Players have the option of beast mode and guns, lots and lots of guns (most of which were not available in the 1940s) that can be found while trying to get away from the zombies and kill them. Beast mode is very cool since players get tentacles instead of guns and can shoot electricity. Excellent. Sadly, beast mode is a short-term thing that has to be recharged. Shadows of Evil is worthy of being a title all it’s own, which is part of what makes Call of Duty: Black Ops III such a bargain.

There is a lot of game time here including (and I love this part) local play, which means you can play the campaign or the multiplayer or Shadows of Evil with someone else in your living room on a split screen, which is fantastic! More games should have this kind of play option. It used to be common and now it’s kind of rare, which is tragic. Black Ops III has it and that alone makes it worth owning.

As a Call of Duty novice, I’m happy to report that this game is awesome. If you haven’t played any of the previous Call of Duty games, it doesn’t matter. There is something here for almost any kind of gamer and that’s really saying something in terms of bang for your buck. I don’t like to spend money on a game that isn’t going to deliver enough playtime to justify it’s price tag, but Black Ops III just keeps on giving. I played it on the Xbox One. Check it out for yourself and let me know what you think in the comments below.