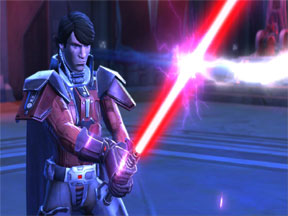 I finally started playing Star Wars: The Old Republic in an effort to review the new Legacies system that has been added to the RPG. The problem that I was having is that to access the Legacy system, you have to get at least one character all the way through their first chapter quest. And there is so much content that it takes a long time. I didn’t unlock my Legacy abilities until I hit level 28. That’s a lot of content, though I suppose I did go on every side quest that I could find along the way. I couldn’t help myself because the game is a lot of fun. But I finally go there.

I know we reviewed Star Wars: The Old Republic when it first came out, and the game won Best Online game by gathering over 50,000 votes in the GiN Game of the Year contest. But I just have to say that I agree one hundred percent with those fans. I don’t remember the last time I had such a good time with an online game. It does about everything right.

Graphically, it looks quite good. This is enhanced by the fact that every single quest giver and major person you talk to triggers a movie-like cut scene. You really feel like you are right there in the Star Wars universe and not playing an MMO because of that. I’ve seen other games where the tutorial characters talk, but never where every single person, alien and robot in the entire universe has a voice. That’s pretty amazing.

The characters are pretty diverse as well. My bounty hunter and my jedi are extremely different. But even my bounty hunter and my friend’s bounty hunter are not the same. I’m a ranged DPS specialist while he is like a combat medic, moving into the fray, ignoring damage and bringing characters back from the brink of death. We have another friend who gets up close and personal with his opponents and burns them with his flame thrower. We are all the same class and about the same level, yet we are really different.

And I’ve never felt like this game is a grind. Sometimes a bonus mission will popup where I need to kill, say, 35 rebel fighters or corrupt droids or whatever, but these are just extra missions that can normally be accomplished while doing the main mission you are working on anyway. You might have to step out of your way just a bit to get those last few kills (though often this is not the case) but it never feels like a grind to me. To me, it feels more like a single player game, the next Knights of the Old Republic title if you will, and not a content-light MMO.

So I’m having a great time and would highly recommend the game to anyone who enjoys MMOs.

In terms of the Legacy system, this is most likely a work in progress, the developers have said as much, but what is there now is quite good. First is the requirement that one character has to complete their first story mission. For the Bounty Hunter, this means getting into the Great Hunt and actually going on the multi-planet adventure. This also means getting your first ship and working with your original companion to help them level up and to get through some of their own problems. Needless to say, this takes a while, not that this is a bad thing. Your first pioneering character won’t get any of the Legacy benefits until that point, but all the ones that follow will get them right from the start.

The first part of the Legacy system is picking a last name. This is applied to all your characters on the same server. From that point onward, all of your characters will earn both normal XP and Legacy XP. You can further define their relationships by making them mothers and fathers and brothers and allies with each other, so the family group is defined. The game knows that two humans can’t produce an alien offspring, so if you try to set that up, it makes the daughter adopted, but otherwise nothing changes.

The most obvious benefits of being in the same family are that certain Legacy items can be mailed to each other. So if you end up with a Legacy bound item, you can share it with everyone, like a family sword or something like that. There are also special Legacy vendors with items for your family to use.

Once you get enough Legacy points, you can begin to unlock new perks in the areas of Alignment, Convenience, Valor, Social and Ship Upgrades. Unlocked legacies are shared by all characters in the same family. My bounty hunter was able to unlock perks for my jedi character that allowed them to buy a speeder bike long before he hit level 25. Membership in the family has its perks, even if your family spans both the light and dark sides of the force and the game worlds.

Obviously, the Legacy system works best for people with multiple characters. I tend to play one character in most MMOs and never take on anyone new. However, even single character players can benefit from the Legacy unlock perks. They just have to blaze the trail first, and only earn the Legacy XP with their one toon. Really, in a game like The Old Republic with such rich storylines that are unique for every character, it’s probably best to play them all, which is my plan. But even if you don’t, you can still make use of the Legacy system.

A lot of the Legacy perks are helpful without being unbalanced, like adding a mailbox to your family’s fleet of ships. Others can be customized to your play style. If you are creating a new character for PvP, you can give them bonuses to their XP gain while doing that activity instead of say, normal questing.

Other perks include the ability to unlock characters into places where they should not normally be able to go, though I have not gotten high enough characters to be able to do this yet. But, you should be able to have a Pure Blood Sith working for the Jedi, because his father was a Sith and you designate him as the son. There is also talk of non-jedi characters gaining limited force abilities, like choke, because their parents were force sensitive or even trained, and passed that trait on to their children, your other characters.

Right now, the Legacy system only works for a single account, and all characters need to be on the same server. It would be cool if you could link up with your friends and create a huge extended family, but for right now, you can’t. The developers have said that was something they were considering at one point, and may do so in the future.

The Legacy system takes an already fun MMO and makes it even better. It’s just one more thing to look forward to when playing, and another reason why I believe that this MMO is going to be with us for a long, long time.