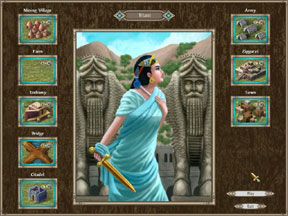 When I first downloaded Bronze from Shrapnel Games, I was struck with the idea that it might be based on a board game. There are so many great board games out there these days, and I don’t assume to know them all. I can barely keep up with all the video game releases. But when I asked the publishers this question specifically, they told me that Bronze was a computer game from the ground up.

The reason I thought it would make a good board game is because it has very defined rules, a select number of pieces, and a fairly simplistic tile-based map that would be easy to scramble around into new configurations, just like a lot of board games I’ve played. Plus it’s easy to learn but difficult to master.

In this turn-based strategy game, you play one of twelve civilizations. Specifically, the Akkadians, Assyrians, Babylonians, Elamites, Ebla, Egyptians, Gutians, Hittites, Kassites, Mitanni, Nomads, and Sumerians are represented. (Insert Ghostbusters joke about the Hittites here.) Each of these civilizations have access to basic buildings like villages, towns, farms and army camps, though they cost different amounts depending on your society’s structure. For example, a warlike people might pay very little, or even nothing at all, for an army but have to spend a lot of gold for a town. There are also special buildings like ziggurats, trading posts and palaces that your civilization may or may not be able to build.

There are a limited number of land tiles for each battle, and each building needs a free one before it can be placed. One building can be built each turn by each player. The goal is to have the most tiles claimed by your civilization when the final bit of land is claimed. That sounds simple enough, except for two things that will limit your expansion. First, almost every building or improvement costs gold. Secondly, some buildings will convert everything around them to the color of their home empire.

To wrestle with the first problem, the easiest thing to do is build farms. They give you a single gold piece and claim that square for your people. The other way is to build a village, which can only be constructed around a little hill, which means the squares around it can be mined. Depending on what type of metal is in the hills (there are three types) and what your civilization’s powers are, you can get two or more gold per village. You only get gold when you place the building. They never generate any more. All they do from that point onward is to be one tile you own in the final victory count. So gold is not all that easy to obtain.

The second part, your opponent’s buildings, are a lot trickier. Take the ziggurats for example. This powerful building might cost as much as five gold pieces, but claims all farms around it, even if they are owned by an enemy, but will do nothing against enemy buildings. To convert an enemy building, you can build an army camp. The camp will convert all buildings around it, but won’t touch farms. And then you have town, which claims every square of unclaimed land that it touches, but won’t affect anything that is already owned by someone else.

Finally, some societies have defensive buildings like forts and palaces. Forts are cheap and guard their single space from being converted. The very expensive palace locks down all tiles in all directions touching it, claiming them for your own and preventing them from turning to an enemy color. They can even be used offensively if you have the gold, though getting enough to construct multiple palaces is difficult.

Rivers throw a kink into the works, because you have to build a bridge to cross over (the bridge tiles do not count towards your final score) and it’s fairly easy to defend a river crossing by simply converting the spaces on the far side of the bridge, which can’t be countered because of the river barrier. So if your opponent is on the far side of a river, you should either try to cross quickly and get a foothold, or be in a position to counter any crossing they attempt. Rivers, especially defended ones, were tough strategic barriers in the Bronze Age, and the game reflects this.

Each civilization’s history is given when you first start playing, which is a nice touch. I actually learned a lot about several of the great societies just by playing. Also, their powers in the game are roughly based on how they acted in real life, so wandering Nomads will be a lot different than the city-building Babylonians. All the societies seem balanced. Some are fast moving while others are slow but powerful. Some are more geared to attack while others excel at defense. Not one of them is an uber-monster that can’t be conquered, though almost all have at least a few others that will be more or less challenging when fought because of how they are configured.

Graphics are 2D with no thrills. Again, this brought to mind a board game more than anything else. It looks good for what it is. It’s functional without distracting from the gameplay. The sound however is pretty bad. It’s generic and repetitive, pretty much everything you don’t want in a soundtrack.

The game interface is very simple and uses just the mouse. You left click to scroll through what can be put on a tile, and then right click to build it. Nothing could be simpler. There is also an excellent tutorial that will take you through everything you need to know to play the game.

Besides the battles on the tactical map, there is in most cases a strategic map where you plot your next move. Your starting points on the tactical map are based on how many surrounding tiles you own on the strategic map. So if you move into a square on the strategic map that is surrounded by enemies, expect to find multiple opponents when you drop into the battle. A good strategy is to try and knock out enemies one on one as much as possible, gaining extra starting points in contested squares and making battles a bit easier.

My biggest problem with the game is how fast the difficulty ramps up. The tutorial can be conquered pretty easily, as it’s designed, but after that, I stopped having so much fun with Bronze. If you’ve ever played chess against a master computer program, you know the feeling. The computer AI knows all the rules and knows how to use them perfectly. Especially on maps with multiple opponents, don’t be surprised when your great strategy falls through as you lose tiles on both ends of your empire. It would be nice if the computer opponents could be set to make a bad decision once in a while, but they always seem to make the best possible play every move. Given the disposition of resources on some maps relative to your staring position, it’s almost impossible to defeat the computer.

I’m not the best armchair general, but I’ve played my fair share of strategy games. And I would say the challenge here is too high. Adjusting the difficulty level puts more time in before the years advance, basically giving you more attempts to defeat the computer in tactical battles before you lose, but does nothing at all for the actual difficulty of tactical battles. I just found myself losing over and over again, albeit with different strategies. If you think you’re a genius with strategy games, by all means give Bronze a try. You’ll be challenged, I guarantee that.

I had much more fun doing hotseat play with humans, and won a few games.

The $30 price tag is good for a game like this, especially if you want a turn-based challenge. You will feel like you really earned something when you win here, even by just a tile or two in the final count. So if you think you’ve got what it takes, by all means challenge this game. There is a free demo you can try out on the Shrapnel Games webpage too if you want to see if Bronze is your cup of tea. And if you get really good at beating Bronze, I salute you, ultimate warrior!

Editor’s Note: Game reviewed on a PC with a copy downloaded from Shrapnel Games at www.shrapnelgames.com.