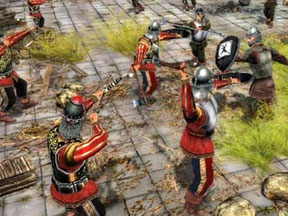 Hard to be A God

Those of you outside of Russia may not know that Hard to be a God is an RPG based on the 1964 novel of the same name by Arkady and Boris Strugatsky. The Strugatsky brothers works may be better known in Russia, but they are no strangers to computer gaming with their 1972 book Roadside Picnic the basis for last year’s STALKER: Shadow of Chernobyl shooter. (Even though the book was based in Canada and not the hot zone around Chernobyl.)

Having read some of their books including Hard to be a God, I know what many of their fans do, that this is not normal shoot-em-up sci-fi. They were some of the first writers in the sci-fi genre to use fiction to ask difficult questions about human nature, war and society. Unfortunately a lot of the analogies and phrases they use are rooted in Russian culture and don’t translate too well to other countries. As such, they are somewhat unknown outside their native lands, though hardcore sci-fi fans know them.

If you read Hard to be a God, then you know the ending places the fates of several characters in limbo. The game takes place a short time after the book, and attempts to explain things. That said, reading the book might be a prerequisite to knowing what the heck is going on here, at least at first.

Looking at some of the newsgroups out there, there are two groups of people it seems: those that know the storyline and are familiar with the book and thus know what is about to happen, and those that are in the dark and end up not liking the game. Lots of people played the short demo released for the game and were disappointed, but really things don’t pick up until after about six hours of play, long after the demo is over.

The developers don’t help matters any on this front because they don’t give you any into movie to explain what the heck is happening. I guess they expect all of us to be well versed in 1964 sci-fi novels, and that is a big mistake that will hurt their sales, though this only marginally affects their review.

The plot of the game is that you are an agent for imperial intelligence in a medieval society on a planet called Arkanar. But there are also explorers from a technologically advanced Earth visiting in disguise. You end up working for them, but don’t know it at first so the game seems completely medieval. Those who buy the game expecting guns and cool sci-fi elements are going to be disappointed as you don’t get your first glimpse of advanced technology until after about six hours, and even then it’s given out in drips and drabs. Don’t expect this to be a new version of Fallout 2.

Speaking of Fallout 2, Hard to be a God follows this type of top-down interface. In a sense the game looks a lot like Neverwinter Nights, and in fact tops it. The graphics seem to be hand drawn, and a ton of detail went into everything. Cities especially are presented realistically, with trash strewn about (sometimes hiding treasure) and lot of NPC going about their business. The NPCs will sometimes fight you and sometimes come to your aid, depending on the circumstances.

Combat, like the plot of the game, becomes more in-depth the longer you play. When you are starting out you can mostly just swing your sword, but as you advance in level you can start to specialize in different weapons from large two-handed swords to fine rapiers to ranged weapons like bows and crossbows. If you use a shield, you can block blows and counter swing at the right moment, which can bring down even the strongest of enemies, though groups of them still pose a problem.

One of the coolest aspects of the game is that you can fight from horseback. Although it’s a little odd that only your horse takes damage when riding it, the mere fact of being mounted gives you a huge advantage. Unless your enemies have bows, there is very little chance that you will be hurt with mounted combat. You simply ride by in long sweeps and hit people on the ground. They can’t seem to react fast enough to hit you back and even if they did, the damage would go to your horse which a) has a lot of hit points and b) unlike you can regenerate hit points when you are not riding it. So get a horse early in the game if you can.

As you navigate the game world, you will collect tons of colorful armor which makes your character look really cool. But it’s also functional. You are a master of disguise and by equipping at least five "role" items on your character (boots, pants, shirt, armor, cloak or hat) you can change the way people react to you. Dress like a bandit and you can stroll through brigand’s camps unmolested, while dressing like a don will force most city guards to treat you with respect. The one confusing thing is that there are several political parties fighting each other and dressing correctly is sometimes difficult because each group hates at least one other, and the lines are not always clear.

Eventually you will discover what the Earthmen are up to, and even meet the main character from the book, who while back home now can still communicate with you due to a special event which I won’t go into. Anyway, you learn that Earthmen generally want to help Arkanar advance, but their meddling causes problems which you generally need to solve along with everything else. This is a long game, and if you are looking to get your money’s worth, in terms of time spent playing you should be happy.

For sound quality, on the plus side you will see that almost every character has a voice, a very nice touch so you don’t have to read paragraphs of dialog. And the voice actors sound good and appropriate for the role they are playing. On the negative side, there are quite a few lines that will leave you scratching your head because, I assume, they are not translated correctly. But these are somewhat rare and it’s easy enough to figure out what is meant, even if they say the opposite sometimes.

The true strength of the game is the storyline, which is pretty amazing. Perhaps it’s not as hard hitting as the book itself, but you will be drawn in by the story and will want to continue playing for hours on end to see what happens next. There are even several twists and turns that I don’t think you will see coming, and lots of moments when it will be difficult to figure out who you should trust given that the Earthmen are used to lying to keep their secrets, and everyone else seems to lie simply to advance their own agendas. You will even become a true medieval lord at one point, which means more responsibilities and problems as you defend your land and your peasants.

I would highly recommend the book, which can be found extremely cheaply these days, for anyone who enjoys sci-fi. If you read the book, then this game will be much more enjoyable, though you can have a good time without it too. Just expect to be very much in the dark for several hours of gameplay. But trust me, its worth pushing through to the other side.