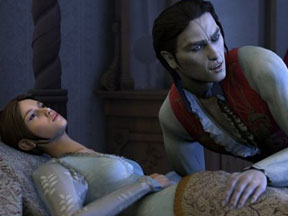 Dracula Origin promises to bring the player to the heart of evil, letting you understand why the one known as the premiere monster of modern legend came to fall from grace.

Surprisingly, Dracula Origin falls short in this promise. However, the combination of strong puzzles, beautiful graphics and a chilling if somewhat clichÃƒÂ© plot makes this game an instant classic, even if it fails to really break new ground in the Dracula legend.

You play Professor Van Helsing and the plot of the game more or less follows the book or at least the general story set forward by Bram Stoker. I guess I was kind of expecting to play Dracula at some point, to be given moral choices and to come to understand how someone who was so good could become so evil. Instead you just become Van Helsing and mostly play a follow-the-vampire path through various locations as you attempt to stop Dracula’s evil plans. At least you learn about the legend as you play, but this is nothing new if you know even a little bit about Dracula’s backstory.

But purely as a game, setting my pre-release press materials and expectations aside, Dracula Origin really shines. It is easily one of the best adventure games released in 2008 so far, and could probably make a lot of people’s top ten lists for great adventure and puzzle gaming.

Graphically, the entire world is dripping with atmosphere. Whether you are wandering through abandoned Victorian manor houses, gothic cemeteries or the wild streets of Cairo, even little details have been perfectly created. And because the presentation is third person, this adds to the overall look and feel with an impeccably-dressed Van Helsing wandering around the environments. This is worlds better than most adventure games which simply offer a slide show type of view as you move from screen to screen. Here, the world takes on a living quality that really enhances the presentation.

The sound too steps it up a notch from most adventure games. The atmospheric music is just one aspect. It’s so good and so perfect, that you almost don’t notice it. Basically the developers added a perfect soundtrack that plays at all the right times. You just kind of start to think of it as part of the scene, even if the place you are exploring would obviously not have a band nearby. The music is creepy enough to keep you on edge too.

The voice acting is also nearly perfect, which is something that most adventure games don’t get to brag about. Those of you who have played a ton of these types of games know the horror that happens when you run into a character whose voice does not fit the role they are playing. It’s even worse when the main characters are bad voice actors. Here, you won’t run into that problem. Van Helsing is perfectly voiced. He sounds smart, a little condescending and at times both puzzling and puzzled. In short, he is voiced just about perfectly.

In fact, every character you meet is backed with good voice acting. Even the minor characters you come across are good in their roles, something we have not experienced in a long time. And thankfully, unlike other games like Riddle of the Tomb, the dialog stays in period, so that neither the words or the delivery breaks the atmosphere.

Of course the core to a puzzle adventure type of game is the puzzles, and Dracula Origin does a great job here because of a very well-designed interface. There are basically two types of puzzles in the game, the atmospheric type of ones and the places where a puzzle acts as a hard block to further progress. The atmospheric type of ones are the type where you talk to a character and learn that they need a shovel or some other object to complete their work, or that you need to find a light source to see into a dark area. You can normally find what you need lying around the scenes you visit, or combine object in your inventory to make the correct thing you need to proceed.

And in Dracula Origin, you are given a great hint tool, which is the ability to hit the space bar. When you do this, all the hotspots on the screen light up. This way you don’t have to click around all over the place looking for a missing button if you don’t want too. Purists who think this is cheating can simply not press the space bar, but others can rely on it to make sure nothing is missed. This is a great way to lower the difficulty level without harming gameplay.

For the second type of puzzle, you will have to figure it out on your own. And here the game is quite challenging. You will have to research newspaper articles or learn the history of some puzzles to have a hope of solving them. And they are quite good and very diverse whether you are lining up incidents on a map or building a key out of pieces of wood. Those of you who like difficult puzzles that really make you think will find several here. And the diversity of puzzle types is quite impressive.

In fact, I almost listed Dracula Origin as a Puzzle game instead of an adventure one, but there is a lot more to the game tan just the puzzles, even if they do take center stage for the most part.

The one thing you probably won’t be expecting is the price. For just $20, Dracula Origin is in the value software category. But don’t let the cost fool you. This is not a stripped down game by anyone’s measurement. What you have is a very high quality adventure game that you would feel good about owning even if you paid $50 for it. At just $20, you will think you died and went to adventure game heaven.