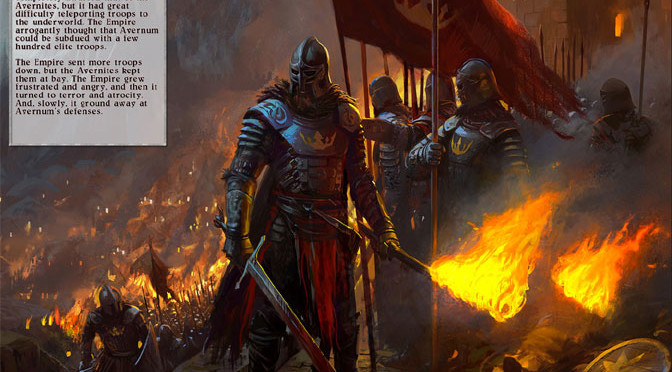 I just love Spiderweb Software. They’ve been making some amazing computer role-playing games for decades. And every so often, they take one of their old school hits and rework it for the modern era. The result normally is a thoroughly modern RPG with a highly nostalgic feel. Such is the case with Avernum 2: Crystal Souls.

Avernum 2: Crystal Souls is the remake of Exile II: Crystal Souls from 1996. Those of you who remember the 90’s might recall the Exile series being released for the PC and Windows as shareware games. Programmed by Jeff Vogel as a more or less one man show, Exile had a surprisingly advanced set of features for its time including a slot-based inventory system and multiparty adventuring format. Things like that make the conversion of yesterday’s Exile into today’s Avernum go much more smoothly than most time-traveling remakes could probably expect. Exile was pretty advanced for the time, so much so that Avernum 2: Crystal Souls doesn’t feel like too much of a throwback, at least as much as it might have were based on a less feature-rich engine.

Of course the fact that Exile was based on a really good story helps with Avernum as well. The story goes that you have “The Empire” ruling the surface of the planet in a typical swords and sorcery dynasty. Everyone they don’t like or who gets fed up with the Empire, goes to the underground, which is a series of caves where people use magic to make the place a bit more livable, to grow food and light the way. Over time the underground people found the kingdom of Avernum, which is quite large actually.

During the first game in the Exile series, the people of Avernum strike out at the Empire. They have their reasons, but the end result is that the Empire invades Avernum, not wanting an entire kingdom to live underground that is not in their control. The Empire has the numbers, but fighting underground is not what they are used to, and although the Empire makes gains, the people of Avernum are able to grind them down to a standstill. There are also these magical barriers that suddenly appear underground that prevents either side from freely moving around, sectioning Avernum off into districts. That is where Crystal Souls (Exile or Avernum 2) begins.

You begin Avernum 2: Crystal Souls as you normally do in RPGs, with a low-level party. You actually have four characters to begin and everything is balanced. You are assigned to the dull duty of digging out a new fortress for the Avernum guard. Suddenly, your work party is assaulted by goblins (always a threat underground) and you have to fight them off in what is sort of like a tutorial level for the main game. This is actually another nice touch that not too many old-school titles had and lets you learn the basics like how to switch between turn-based and real-time movement, how to use special abilities, how to equip gear, how to fight and cast spells and how to interact with NPCs. You pretty much learn how to do everything within that first 15 to 30 minutes.

Avernum 2: Crystal Souls plays out in real-time while you are adventuring and exploring. It’s not true real-time like we think of it today. Shopkeepers don’t close their buildings for lunch or gossip behind your back, but the world does move along as you do. You control where the first person in your party walks and the other folks trail behind. They stick to your tail perfectly so there are no issues of clipping or non-controlled characters getting stuck, as it is a 2D world after all. When an enemy appears on screen, play switches to turn-based where characters can move and act based on how many action points they have. The combat is highly tactical, so you can take your time –and probably should- to consider all your options. Often times the game will offer players unique tactical advantages if they can find them, or simply awards good judgment like team attacking one enemy at a time, keeping your mage behind the lines and the like. Fights are difficult, but not unfair, making the balance just about right for most players.

For an older game, the characters are surprisingly detailed, both in the way they level up and the equipment they are wearing. Every character is broken down into a multi-slot paper doll that can be equipped with a variety of weapons. In addition to having a melee and a ranged weapon equipped, there are also slots for arms, cloaks, legs, rings and helmets. All equipment can be dragged and dropped into place, something we take more or less for granted these days, but was kind of new and cool when Exile first came out. Leveling characters is done on a fairly advanced tree too, so you can tailor your group to your preferred playstyle and combat techniques.

Graphically, Avernum 2: Crystal Souls isn’t going to blow anyone’s mind. Exile looked pretty darn good for the time, and Avernum is able to upscale those graphics into modern resolutions so that the game looks pretty good even at 1,920 by 1,080, which would have been unheard of back in 1996, but is how Avernum 2: Crystal Souls was tested and played at. At that level of detail, everything still looked very nice and you could easily tell the difference between, say, a sword and a shovel lying on the ground.

There isn’t much to Avernum’s sound. The background music is okay, and the environmental and combat sounds are pretty standard. There is no voice acting, but all of the dialog has been redone from Exile. I don’t remember this, but apparently Exile had a few problems with some of the conversations. With Avernum however, whenever you talk with someone it makes sense. Some of the portrait graphics have also been given a remake so that speakers look a lot more realistic, even for relatively minor characters.

The bottom line for a remake like this is that Exile was a fun game to play, especially for lovers of deep RPGs, but it never worked quite right on modern computers. It doesn’t hurt that Crystal Souls was arguably the best title story-wise of the series. As such Avernum 2: Crystal Souls is also fun to play since it’s basically Exile in a brand new shell but with the same heart. It will of course appeal to people who played Exile many years ago, but you don’t need that experience to enjoy Avernum. All that is required is a love of those old school, deep dungeon diving experiences of the past – now made new again and ready to impress former players and a new generation alike.

Avernum 2: Crystal Souls earns 4 GiN Gems for helping us to remember why we fell in love with computer RPGs in the first place.