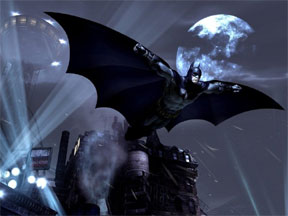 Superheroes often get short shrift when it comes to videogames. Spider-man and Superman have had their fair share of travesties, with few exceptions, but Batman bucked the trend when Rocksteady’s Arkham Asylum swooped into town. The reviews raved and fans of the comics and the animated series were swooning with delight. Here, at last, was a game that delivered all the gothic, brooding of Batman and added splashes of glorious Technicolor in the form of his wondrous gallery of villains. Batman: Arkham City has a lot to live up to and instead of the claustrophobic interior of the madhouse, we’re surveying a city from its moonlit rooftops.

Arkham City is definitely bigger than its predecessor, with a more map, more gadgets and every Batman super villain worth their salt. Rocksteady needed to pull something out of the bag to meet expectations and they’ve certainly had a pretty good stab.

The game starts with a rather underwhelming cut scene, which picks up shortly after the events of Arkham Asylum. Bruce Wayne stands up to dispute the wisdom of putting gates on the slums and putting Gotham’s villains in this glorified asylum to fight among themselves. This is Arkham City and it’s the vision of Dr. Hugo Strange and of course all hell has broken out beyond its dark, towering walls.

Bruce Wayne is detained by Strange, for daring to speak out, before being thrown in with the inmates. I guess Strange has got the keys to the city, but ludicrous storylines aside, it all kicks off when we get down with the bat suit. Of course, what he doesn’t realise is that Wayne is really Batman and he’s about to whip Arkham City into shape.

Delving into the DC Universe

I can’t fault Rocksteady for their attention to detail. This team clearly has a love and affinity for Batman in all his incarnations. The city is littered with references. Whether it’s perching atop the Ace Chemicals building, where the Joker gained his disfigured face and a place in the DC villains Hall of Fame or gliding above the steps where Bruce Wayne’s parents were killed, Rocksteady have left plenty of clues for fans.

Arkham City conveniently places all of Batman’s foes in one place and this means that the game wheels out every villain ever. Now, it’s nice to have variety (it being the spice of life and all that), but it can feel a bit like the devs are throwing everything and the kitchen sink at us. There are some gems, like the Mad Hatter, who dishes up a Donnie Darko inspired sequence, but I just found myself wanting more Joker and more Mister Freeze.

Despite the smorgasbord of Batman arch enemies, I did find myself enjoying the boss battles, which is no mean feat. I’d struggle to find a game that offered up more satisfying bosses. Here is a game that eschews ramping up the difficulty to impossible, in favour of just presenting a neat challenge that requires skill and a modicum of persistence.

Now and again Arkham City dishes up nothing more than a rampaging Titan with a few redshirts for good measure, but on the whole the boss battles are engaging. Mister Freeze is a particular highlight. This sequence requires you to use a little more guile and ingenuity, as you delve through Batman’s range of gadgets and takedowns to defeat Freeze. But you can’t repeat the same trick twice, as Victor’s suit quickly modifies itself.

Once again, Rocksteady have succeeded in creating those Batman moments. There’s nothing as satisfying as a loitering on a gargoyle before performing an inverted takedown, leaving a henchman dangling, not knowing what’s hit him.

Arkham City is at its best when you’re soaring over rooftops. This time around you get an added boost to your glide. Whilst gliding, dive bomb, release and pull back on the controller to increase speed and height, meaning Batman can glide for longer. But as the game progresses, Joker arms his mob with laser sight rifles, making it easier for you to be shot out of the sky.

Batman can kick serious arse, but he’s still no match for bullets. However, this time around we get smoke bombs to confuse thugs in the middle of combat and give the Caped Crusader a chance to grapple his way to safety and back into the shadows.

When it comes to "becoming Catwoman" I was more than a little miffed to find that I needed to be on Xbox Live to redeem the code I’d already paid for when I bought the game. But Catwoman’s missions only make up a small part of the game, which may disappoint fans keen to creep across rooftops as everyone’s favourite feline uber-vamp.

The overarching story is fairly good and without giving away spoilers, the fates of Joker and Batman are closely tied together, providing a good level of conflict. Added to this, each Batman villain is somehow embroiled in the story, adding their own facet. Despite the fantastic voice acting and beautifully realised setting, I couldn’t help feeling that something was missing. I don’t love this game as much as the rest of the world seems to and I’m not sure why, but it could be down to the repetitive gameplay.

Considering Batman has a frankly, bewildering array of gadgets and skills, all the missions seem to involve entering a building, flapping around the ceiling girders, picking off foes and then dropping down to have a bit of fisticuffs. Walk on a bit. Enter a room. Grapple up to a ledge or gargoyle. Pick of foes. Glide and grapple. And finally swoop in for the kill.

It just all gets a bit samey.

And then there’s the attempt at open world game play, which I don’t think works, entirely. There are side missions to complete, but with the clock ticking on Batman’s fate, the last thing I wanted to do was rescue some numpty from a bunch of thugs, just when I wasn’t passing, I was actually right on the other side of town. Then there are the useless collectibles, with Riddler’s trophies dotted around the cities as annoying puzzles. The best thing about these distractions is that they can all be ignored, if you so wish.

The Cold Call Killer is one side mission that managed to keep my attention, although the husky, deranged mumblings of said killer, a.k.a. Victor Zsasz, did begin to grate. In a classic thriller movie style, Batman has to make his way across town to a ringing phone box in an allotted time scale to save an innocent hostage from being killed. This is when the glide and grapple comes into its own, as you soar over the city in a race against time.

Luckily, if you don’t want to interrupt the main missions you can play through the primary story and then go back to clean up the rest of the content. I for one, would have liked more compelling side quests, to make it feel like a richer world, rather than just a bit of padding.

Batman has the best backdrop of any superhero, in the shape of Gotham, or this time, Arkham. He also has the best villains in comic history, so I can’t help expecting a bit more from the story and the missions. There’s no getting away from the fact that Arkham City is a good game, it’s just not as great a game as everyone is making out.