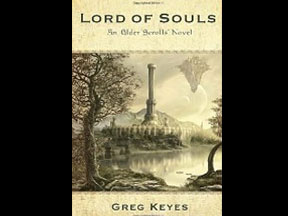 I’m happy to report that the wait was not in vain and that Keyes wraps up the two-part series in a way that is both moving and satisfying.

The events of Lord of Souls take place immediately after The Infernal City. As in the previous book, Lord of Souls is told from multiple points of view. Annaïg and Mere-Glim are still trapped in Umbriel, the floating city from Oblivion that has brought so much death to Tamriel. The city sucks the souls from every sentient being below it, regardless of race, to fuel its steady march to the Imperial City, where it seeks the White Gold Tower for its own mysterious reasons. As the city steals away souls, the undead rise in a grisly army below it.

Prince Attrebus and the Dunmer, Sul are fighting to save Tamriel, and Sul has his own dark vengeance planned for the Lord of Umbriel, the Lord of Souls referred to in the title.

Colin, the Inspector with the Imperial Guard, is still working his own plan to stop Umbriel, but all is not as it seems in the Imperial Court.

The thing that impresses me most about these two books is not that Greg Keyes has crafted such an engrossing story, but that he has done so based on an open world video game that is totally controlled by the player. Everyone has a different experience playing Oblivion and yet, there are places and objects that most of players know and it is these details that Keyes so carefully weaves into his story.

As a gamer who spent hundreds of hours playing Oblivion, I have nostalgic memories of places within the game. There is a scene in Lord of Souls where characters are crossing Lake Rumare to the north trying to make their way to the entrance to the Imperial sewers and I know exactly what this looks like and where they are going, and if you spent any time playing Oblivion, you do too.

Remember the sword of Umbra and what a nightmare it was getting it? That sword plays a critical role in Lord of Souls in a way that will both surprise and delight long term fans of the Elder Scrolls games.

While Lord of Souls definitely doesn’t stand alone, it is the perfect ending to what was started in The Infernal City. If you’re hoping for something that has a pat, sweetness and light, feel good ending, look elsewhere. If however you want something complex and worthy of being part of The Elder Scrolls, then this is the book for you.