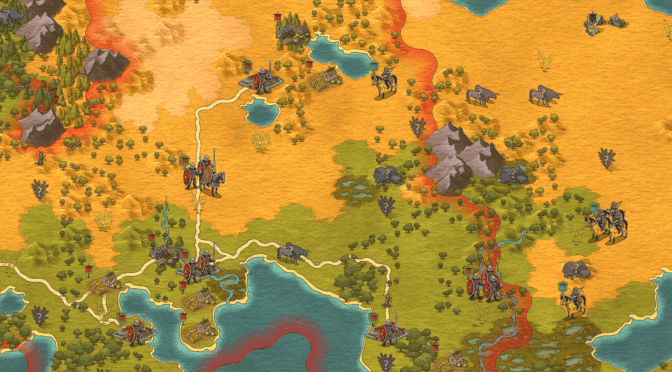 I have been a fan of the Civilization series since Sid came out with the non-numbered original. There has just always been something about taking a small empire from practically nothing and ending up leading the world in some capacity or other. The entire series has won awards across the production process, and for good reason.

Game designer Jon Shafer is the same way. He liked the Civilization games so much that he became a beta tester for Conquests, the expansion pack for Civ III. He worked on everything Civ until becoming lead designer and programmer for Civilization V (the third-best Civ in my opinion – shout out II and IV). This work won him a 2011 BAFTA award for the Best Strategy Game. So it’s safe to say Jon Shafer knows 4X strategy games.

At The Gates is a turn-based strategy game in the spirit of Civilization.  While there are similarities in the basic building blocks – units, resources, knowledge advances – they are definitely put together in some novel ways. You play one of 10 barbarian tribes in the late fifth century, after Rome has split in twain.

You start the game as one might expect – with a single settlement, a few units, and a few primitive technologies. But At The Gates displays some major differences right off. You can move the settlement at any time to allow you to take better advantage of local resources. The clans (units) you get will stay off the map in your settlement until you train them, but only one of them at a time.

You can train clans in two types of profession – settled, which stay indoors, and active, which move about the map. The first type of active professions you can access are basic resource-gathering ones, such as Hunter. You can send these clans out on the map to identify an gather from resource sites.

To allow your clans to do other things (or the same things more efficiently), you need to research technology. They are grouped in six disciplines, such as Crafting. A trained clan will gain levels in its profession’s discipline, which will be erased should they train in a profession outside it.  So, in essence, once they are good at Metalworking, the most efficient thing is to keep them in Metalworking.

To unlock advanced professions in a discipline, you first must train in that discipline. This usually costs one turn, and when you are done you can pick a clan in the settlement to immediately gain two levels. At this point you can research any of the bottom row of that discipline’s technologies. Once you’ve learned one of those, you unlock all of the second row, etc.

A few of the professions allow you to construct buildings that perform the dual function of harvesting resources and enlarging your empire’s borders. While these can’t move like your settlement, a good number of them spaced just so can increase its flexibility.

Each clan carries with it more than just its name and whatever weird barbarian sketch the game decided to give them. They are also given two traits. These traits will make them better or worse in certain disciplines, or make them more suited for active or settled professions. The game seems to randomly assign them whenever you get a new clan, and it can be difficult to figure what to do with them.

You attract new clans in  At The Gates by accumulating Fame points. You do a bit of this naturally each turn, and some professions can help you gather more. Each additional clan requires even more Fame than the one before it, so you will get a bunch at the beginning of the game and then they will dwindle.

You move your active clans on the map as you would expect – slower over difficult terrain, etc. However, when the weather turns cold, they might run out of supply if they are in inhospitable terrain. The clan will take damage every turn it is out of supply, so get them back inside your borders pronto!

You will eventually get to the point where you produce what you need. If not, a caravan comes through every so often. At first they will only deal in basic goods. You can give them some gold to upgrade them so they will have more the next time. Sometimes a good is in shortage or surplus, and the buying and selling prices will be adjusted. Don’t worry about remembering all the prices though – those adjusted in your favor are in green, and others in red.

There are two ways to win At The Gates. The first is you must find either the Eastern or Western Roman Empire and sack its capital. For this you need some powerful military units, and patience. Since all cities look alike to you, you won’t know which is the capital until you pillage it.

The second way is to make five legionnaires and then overthrow Rome from within. To make this type of unit, you need to have some advanced weapons and armor, and send a clan off for 24 turns (one year). After that they will return as a powerful military unit. Once you have five, you need to assemble them in your settlement and click the “Overthrow” button. Then you have to wait another 24 turns before you actually win.

One of the best features of this game is the help system. When you click on a topic a tooltip window opens up with a bunch of info, often multiple panels’ worth. Some keywords are yellow, and when you mouse over them another window defining that term appears. It will keep doing this as long as you need to. It is definitely better than having to read a lot of info all at once in a certain order.

While I can see a lot of potential in At The Gates, it’s hard sometimes to see past its problems. First, there are a crap-ton of bugs. Things like, when you train an Instructor (removes undesirable traits) and then train him as something else, you can still remove traits. Or when a caravan good is in shortage sometimes the buy price is lower than the sell price, so you can buy and sell over and over for infinite money. Yes, they’ve identified these and are planning to fix them. But these would have been caught in an in-house round of alpha testing, which doesn’t exist in the Kickstarter culture.

I can forgive the bugs as “nature of the beast.” But some core game design decisions still stick in my craw. For instance, the “diplomacy” system is really minimal and largely in the background without any degree of player control. You have a reputation with each faction that goes from negative 10 to positive 10. But you have next to no way to control what it is. Every once in a while a faction will come by to say how much more they hate you. You can do two things to interact with them – declare war or make an alliance. And the “Make Alliance” button is grayed out nearly all the time. The 1.3 patch will theoretically give us more diplomatic options, but that won’t be for nine months or so.

And here’s another thing: none of the AI factions are trying to win. You heard me correctly. So you, as a player, have no time constraint or pressure to win, and can take enough time to ensure victory. The lack of neck-and-neck competition is the largest flaw in the game, in my opinion.

Despite that, At The Gates is a fun strategy game that is challenging in many areas.