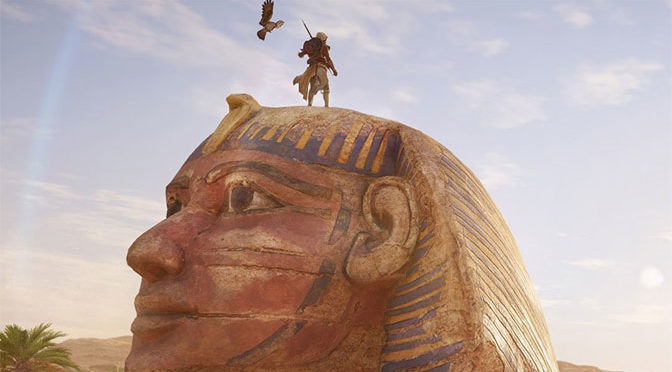 Squeezing through a gap in the rocks, an ancient tomb or temple is revealed. The flickering firelight of the torch glances off huge, black onyx statues and gold hieroglyphs, whilst the milk white walls display colourful pictographs of gods and goddesses with stylised palm fronds and lotus motifs. This is the opening of Assassin’s Creed: Origins, the latest in Ubisoft’s globetrotting series. After a short hiatus, Ubisoft has made a return to everything we love about Assassin’s Creed and a lot of it is down to the perfect setting of ancient Egypt.

Ubisoft has really gone to town, when it comes to the research for Assassin’s Creed: Origins. The team consulted historians and academics to create a form of ancient Egyptian for NPCs to speak as you pass by. From daily rituals at the towering temples, to the looms the cloth merchants use and even the methods employed by brewers and embalmers – this feels like walking through history, which is exactly what an Assassin’s Creed game should feel like.

Origins is the best looking Assassin’s Creed game ever and it’s the most compelling since Ezio swaggered onto the scene.

A lot of the success of an Assassin’s Creed game hangs on the hero and after a few missteps and a year off, we’ve finally got another charismatic lead. Bayek, voiced by Abubakar Salim, is the hero Origins deserves. He’s noble and driven, a good friend and a supportive husband to his equally heroic wife, Aya.

It’s worth noting that Bayek and Aya are both unambiguously brown, so on the surface, at least, there is no Hollywood style whitewashing of Egypt. Cleopatra is also clearly Egyptian, bucking the trend for blue-eyed Egyptian queens. However, she is highly sexualised and probably owes more to Elizabeth Taylor’s depiction than historical accuracy. It’s also disappointing to find that Aya is voiced by white actor, Alix Wilton Regan and Cleopatra is played by another white appearing actor, Zora Bishop.

Bayek is a Medjay, which is a sort of ancient Egyptian sheriff. This is a great excuse for everyone and their dog to pester you with side quests. Everything from helping a poet put on his play to helping a village against hippo attacks ( I kid you not) and rescuing activists from various tyrants.

As time goes on, these missions do become a bit formulaic. There’s usually a guarded fort that needs to be infiltrated to find the thing or rescue the person. Along the way Bayek can collect treasure, get extra XP for killing the captain and essentially reclaiming that fort from the bad people. It’s a tried and tested formula of the Assassin’s Creed series, but Origins has such a huge world, that these fort quests crop up a little too often.

Whilst some of the side missions can be a bit samey, the characters you meet are wide and varied. Whether it’s a mother whose son is missing and you investigate only to find him dead, killed by corrupt politicians or an old man who’s lost an important book, their dialogue and stories interweave with the overall story. There’s a lot of writing in Origins and it’s often deftly done.

Bayek’s main mission starts as a story of revenge, which has an emotional reveal near the beginning. And then we meet Aya, his sexy, smart, powerful wife. Together, Bayek and Aya are super sexy and often take time out from saving Egypt to take a roll about together on temple rooftops and in gardens and sometimes even a bed.

Apart from being half of this super hot couple, Aya also draws Bayek into the larger political stakes of the world. She’s a supporter of Cleopatra’s claim to the throne and encourages Bayek to help them turn the tide in their queen’s favour.  Aya also plays a bigger role, as the game goes on, but is perhaps underused.

The central story is engaging and the missions are varied enough to keep things interesting. Thankfully, those awful chase and eavesdropping missions have gone. Instead we get assassinations in a bath house, dressed only in a towel, to more traditional rooftop infiltration and a Hitman style freedom to complete tasks in your own style.

Assassin’s Creed: Origins also sees the gameplay make a marked shift towards an RPG. Bayek has a skills tree that allows you to develop certain aspects. The Seer errs more towards pets, poisons and smoke bombs for stealth. The Warrior does what it says on the tin, focusing on melee, whilst the Hunter hones your bow skills.

Your gear can also be upgraded along the way by hunting various animals, depending on which item you want to improve. There are resources, such as bronze and iron, which can be hijacked from passing carts and ships. Alternatively, you can dismantle dropped weapons, in your kit to mine their resources. If you want to skip all this fiddling around, money is pretty easy to come by by looting, so you could just upgrade your gear at the blacksmith’s.

Origins manages to avoid the problem of map clutter by grouping missions by level. This means you never feel totally overwhelmed by how much there is to do; a common feature of Ubisoft’s map-sprawling games. The game tends to lead you quite naturally around the world, so even if you follow the main missions, you’ll probably be able to mop up some side quests along the way without backtracking.

The eagle, Senu, is one of the best additions to the game. Not only is it pure pleasure to soar over this beautifully realised world, but Senu actually comes in handy. Send the eagle up to locate targets and lock on or distract guards by dive-bombing them, while Bayek sneaks past or takes them down. Senu also allows you to scan the world for quests, secret locations and resources or to just soak up the view.

Thankfully, the animus sections have been stripped right back for Origins, because who wants to be in the modern world, when you can be in ancient Egypt. Layla takes the place of Desmond and now and again the player is pulled out to find out about her story.  If you really want to, you can delve into her emails for the whole corporate angle. I chose to do the absolute minimum to get me back to Bayek.

Origins is like the greatest hits of the Assassin’s Creed series, cherry picking everything people loved in each iteration. With that in mind, ships make a return. In Origins,  small boats can be used as mounts, allowing you to get between islands for more treasure and side quests. Later,  there are Black Flag style missions involving ramming fleets and sinking Ptolemy’s ships to help Cleopatra take the thrown from her brother.

The combat in Origins is less of a passive affair, instead focusing on blocking, dodging and attacking. However, I never really found my groove with it. The lock on feature doesn’t really work, so if you’re surrounded, it’s difficult to focus on one enemy at a time.  And dodge felt slow to respond, leaving you prone on the ground after an enemy attack.

In addition, the climbing doesn’t feel as smooth as it once did. Climbing up is fine, but getting down off anything is a nerve-tingling affair. Too often Bayek teeters on the edge, but doesn’t climb down and grip, resulting in you getting spotted. Or you just leap off the edge and take a hit to your health.

Overall, Assassin’s Creed: Origins is a triumph of setting and two compelling lead characters, supported by an interesting cast of side characters. Whilst Aya and Bayek’s relationship is the beating heart of the game, the villains don’t really get time to shine. The Scarab, in particular, was an engaging foe who I could have spent a lot more time with, but then he was dead and it was on to the next target.

Assassin’s Creed: Origins is the most beautiful game of the series and I’m glad they waited to do Egypt justice. Even if the side quests become repetitive and the combat isn’t always satisfying, Bayek and Aya are always entertaining, whilst some of the changes have honed the Assassin’s Creed experience to create one of its best. As always with Ubisoft’s flagship series, it’s the world that steals the show and this one is going to be very hard to beat. Where would I rather be than ancient Egypt? Right now, nowhere.