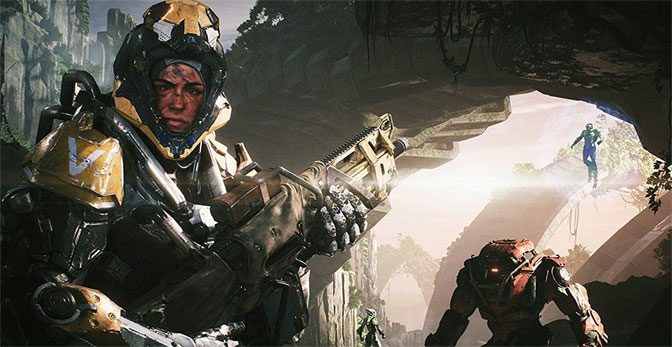 After two back-to-back weekends of beta play, there’s no question that Anthem is heating up to be one of the most highly anticipated games of early 2019 as eager players await the official Feb 22nd launch date. Ever since the team at Bioware “wowed” us back at E3 with the concept of freelance agents, powerful exo-suits, dangerous missions, and epic boss fight encounters many players had been anxiously awaiting a chance to test-drive EA’s newest loot-based shooter. 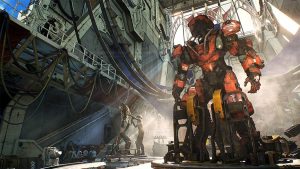 The majority of us have only played the demo but it’s clear out of the gates the game looks pretty amazing. Large open-world environments filled with lots of depth and interesting terrain changes including cliffs, plateaus, rock formations, hidden caves and underwater caverns provoke you to scour and discover nearly every inch of landscape.

What we’ve gathered so far from the story is that you’re part of an organized group of freelance exo-suit or “javelin” pilots commissioned to venture outside the fort city of Tarsis and gather resources for its inhabitants. The world on the other side of the safe walls of Tarsis has grown extremely dangerous with time though, as a brutal struggle between humanity and a vicious race of aliens called the “Scars” rages on for control of the “Anthem of Creation,” a powerful machine built to reshape, even re-forge, new worlds. 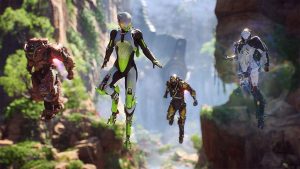 In an ill-fortuned twist of events, the Anthem’s original creators were suddenly lost leaving their powerful instrument left running unattended. As the conflict grows outside the walls, so does the threat of an unclaimed Anthem left to create primeval beasts, marauders, and world-altering events in its wake through a random series of violent “Shaper Storms.”

Freelancers help to hold the line that keeps the very fabric of humanity from unwinding both outside and inside the walls. With the help of their powerful javelins and untapped technologies they help to keep hope alive on the side of humanity. 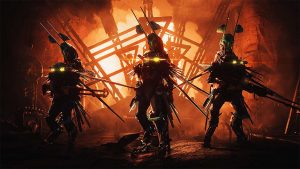 The gameplay physics of Anthem are absolutely amazing. Piloting a javelin suit (or basically a mech from other games and worlds) has never been this fun. The world is huge and looks to go on as far as the eye can see, but can be easily spanned and covered with the aerial capabilities of your exo-suit. With the power of flight you can literally go almost anywhere on the map leaving pilots with that satisfying feeling of freedom and sheer raw power at their fingertips. It’s a somewhat unique and liberating gameplay experience that kind of puts Anthem in a different light compared to other loot-based shooters. Add to that a massive amount of firepower and story-telling and you’ve got the makings of something really special going on here. 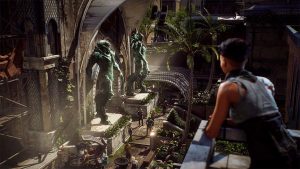 There’s so much more to tell and many more stories left untold, but alas most of us will have to wait until launch to fully uncover the whole world of Anthem. Keywords: “most of us.” If you were one of those fortunate enough to be an “EA access” or “Origin Premiere” member then you’re adventure has already begun in one form or another as these players will have earned themselves an early access pass to the full game on this very February 15th weekend. To those lucky souls we say “Happy Javeling!” 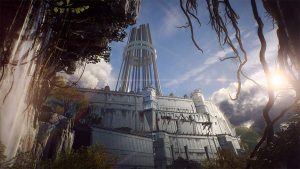 As for the rest of us: Fear not! For our time shall come just a short “nail-biting-Youtube-Twitch-binge-watching” week from now! Cling to your gaming chairs and stay strong my fellow freelancers! For we shall ALL be together again soon! GiN out!