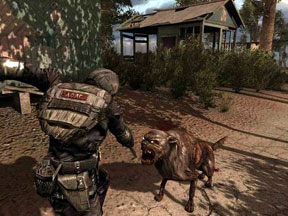 The world of Stalker (henceforth referred to as just one word even though it stands for Scavengers, Trespassers, Adventurers, Loners, Killers, Explorers and Robbers) is basically confined to the thirty mile exclusion zone around the Chernobyl reactor. In real life, when the reactor melted down, the Soviets forced everyone inside the zone to pack up and move out. Residents were apparently told they could return, but were never allowed back in. The result is several ghost cities with empty playgrounds, amusement parks, docks, supermarkets, office plazas, residential apartment buildings and government facilities, now sitting empty and unused as if everyone had just stepped out for a moment. Of course years of weathering has taken its toll, so that most of the zone looks like a "Life After People" show on The History Channel. It’s a perfect setting for a horror title, and has been photo-realistically recreated for the game in amazing detail.

In the game world, the radiation has mutated dogs and pigs and even people into strange and deadly creatures that roam the wasteland looking for trouble, or just their next meal. There are very few safe areas, so whether you’re high atop an old storage silo or deep underground in an apartment building’s sub-basement, you need to keep your guard up or you might get an unpleasant surprise of the teeth and tentacle variety.

Though this is nothing new for old school Stalker players, the reason anyone braves the horrors of the zone is for the artifacts. At least that’s what drives most people. Artifacts are little rocks created by the disaster that have various powers akin to magic. Some can heal radiation poisoning (a huge boon inside the zone), protect the user from fire or harsh chemicals, defy gravity or let you run for hours without getting tired. They are in huge demand outside the zone. Even the relatively common ones can fetch thousands on the black market. So you need to decide if you want to sell your finds to traders or carry them around and keep the benefits for yourself. Adding to the challenge is the fact that most artifacts sit inside anomaly fields that can scorch, melt, crush, throw, incinerate, scold, electrocute or simply outright kill you if you make too many wrong steps.

Stalkers mostly look for the artifacts, so in a way they are the bottom of the food chain. There are also bandits which prey on Stalkers, though in this game most of the bandits are pretty friendly to your character unless you actively move against them, which you might, but more on the moral choices you will face later on. Then there are mercenaries who are pretty much universally hated because they will do anything for money. Two factions are even at war with one another. The Duty faction wants to destroy the zone to prevent it from expanding and the Freedom faction wants to preserve and study the zone. Then there are some minor factions like the Scientists and the Military who have their own agendas, but for the most part stay well clear of the zone’s true hotspots.

In fact, that’s where you come into the story. If you remember from the first game, once the brain scorcher was turned off, everyone made a dash for the new areas deep inside the zone, hoping to scoop up fresh artifacts and perhaps even lock down control of entire sectors. The military was no exception. They launched Operation Fairway where they sent five helicopters loaded with troops into the middle, hoping to beat everyone else to the punch. Every chopper crashed, and Fairway was an epic failure for them. The thing is, the military doesn’t even know why it lost all those men.

To find out, they are sending you into the zone. You play a highly decorated army major working with government intelligence services. You go in undercover as a normal run-of-the-mill newbe stalker. Your mission is to find all five helicopter crash sites and figure out why they went down, plus rescue any survivors. This leads to other missions as you attempt to solve this mystery. Given the vastness of the zone and the dangers involved, it’s a real lone wolf mission with a low survivability rate. You’re going to need to think like, and act like, a real stalker if you’re going to have any chance of success.

The plot is really ingenious. On the one hand you have your main mission, but you can only enter the zone with what you can carry, which is one rifle, one pistol, limited supplies and a couple thousand in cash. Unless you’re really lucky, you will burn through your ammo in just a couple firefights. That means that you’ll need to take side jobs to earn a place in the zone. And you will need to befriend Stalkers if you want to have any hope of figuring out where the choppers went down, or getting to them. Thankfully, acting like a Stalker is really fun. For all intents and purposes, you actually become one, or you better if you want to survive.

Unlike most shooters that have linear goals and scripted enemies, almost everything in the zone has a life of its own. Day cycles to night and back to day on a regular basis, so if you’re afraid of the dark, you will want to start heading someplace safe to hold up when the late afternoon sun starts to turn the sky crimson or orange. You can sleep in safe places if you want to pass the time.

The zone is also home to some huge thunderstorms, which again seem to be totally random, but expect one at least every few days. There is even an emission weather event where the zone goes crazy. If you are outside during an emission, you will die. You do get a warning over the radio when one is approaching, but not much. You need to hightail it for solid cover (cement buildings, natural caves, some military structures) fast and hope your chosen hiding place isn’t filled with zombies. If it is, you better clear it fast so you can hide from the coming psychic blast. Once I was about to snipe a target when the emission warning sounded. I had to abort and find cover really fast. I made it, but just barely.

Because most things in the zone do their own thing, you never know who or what you will run into. You can wander the wasteland and nothing will attack you one day, and the next you’ll feel like you’re wearing a chewtoy around your neck. Decisions you make in the world can even haunt you. Case in point, once I saw a group of Snorks milling around at the extreme range of my scope. They are former Stalkers who went crazy and now act more or less like animals. I was in a bit of a rush, and didn’t have time to walk over there and hunt them down, even though I knew that a lot of Stalkers walked through that area and might get ambushed by them. Later when I was returning, the Snorks had moved and actually ambushed me. Like a great horror movie, you can go for a long time exploring the creepy world, turning to listen at every sound and keeping your guard up. And then as soon as you let it down, you get mobbed.

Your reputation will grow and change with different factions depending on your actions, but gone are the ridiculous "faction wars" of Clear Sky. You can’t just look at a chart and tell who likes you either, but the reactions of people when you approach them will let you know. If they say something like "The man himself!" then you’ve got a good rep with that person or faction. If they start shooting, they probably don’t like you very much. Choices will have to be made in the game at some point that one group or another won’t like, so don’t expect to be able to please everyone. I normally opt to screw over the Bandits who are scumbags anyway, or the mercenaries since they are also kind of hated in the zone. As for helping Duty or Freedom, or neither or both, that’s up to you. But don’t expect a lot of black and white choices.

If you really liked the action of the faction wars, then you can replicate that experience easily enough online, since the game offers this unique experience for the series. There are Stalkers vs. Mercenaries maps, hunts for artifacts, free for all and capture the flag types of gameplay. You can even play NATO weapons vs. Warsaw pact ones if you like. If you enjoy multiplayer, this is a nice addition to the series.

And speaking of guns, there are lots of cool ones in the game, mostly of the Warsaw pact variety, though a few of my favorite NATO weapons do sneak into the zone somehow. And yes, you can repair and upgrade them, turning a rusty old assault rifle into a fully automatic, silenced, sniper rifle with night vision if you have the desire and the cash.

Perhaps the biggest surprise with Call of Pripyat is that it runs smoothly on normal computer hardware. In fact, it ran great on a Pentium 4 single core gaming system with an ATI Radeon graphics card. This was the same machine that nearly choked trying to limp along with Clear Sky (though the graphics card had since been replaced), yet the graphics in Call of Pripyat are just as good or better than either of the other two games. I’m not sure how they streamlined things, but the developers did a great job. You get a smooth world and some nice visuals.

Call of Pripyat is a great addition to this fantastic series. Changing out the plot that everyone knows by now with a new cast of characters, yet retaining the same creepy and deadly open world makes for a perfect gaming experience. You really will feel like a lone wolf out there in the zone, surviving on your wits and shooting skills in about equal measure. Call of Pripyat truly is a living world, and if you’re not careful, it will steal a lot of time from the real one. I had many "just five more minute" moments playing this thinking man’s shooter that seemed to stretch till almost dawn.

As the best of a great series, it earns a rare 4.5 GiN Gem score. See you in the wasteland!