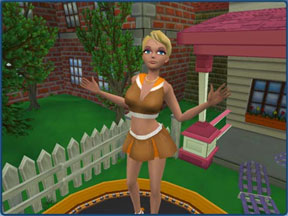 Apparently, this week GiN is featuring classic games and game developers of old as Nate Wooley talked at length on Monday about how cool Sid Meier and his games are. Unfortunately, I was not at the party where Nate got to sit with Sid, though I did meet the man one time years before – at a job fair no less.

Sid was just Sid back then, not Sid the gamer god. He was recruiting people to come work at Microprose from my college. So I went down there with my resume in hand and a friend of mine tagged along. When I got up to Sid and handed him my resume, my friend told Meier that he had a question. He then proceeded to ask him why in Covert Action (one of Sid’s best games of old) did you run around with an Uzi that only fired tranquilizer darts and not real bullets.

Sid said the reason was that it gave the players the chance to be destructive without anyone really getting hurt.

My friend thought about that for a minute, and then said, "Man, that is Pu**ified" before turning and walking away.

Needless to say, I did not go to work at Microprose.

Years later however I was at an industry party with another legend: Al Lowe. Lowe is like the yang to Meier’s Ying. Lowe is very much like the Larry character he created in his long-running series: he is loud, large and as far as I can tell, loves to party.

In fact, when I met him he handed me a Larry matchbook and said, "Really, I wanted to be handing out Larry condoms, but Sierra won’t let me."

When I heard that Larry was coming back in a new game, I was overjoyed. But all the PR people I talked with kept dancing around the issue when I asked them if Lowe was part of the design team. After some research, I found out that he was not included. I would imagine this would piss Lowe off a great deal, though I am not sure.

Anyway, without Lowe I had serious doubts as to the quality of the game. What saved the title for me is the fact that the format of the new Larry game is completely different than the games of old. I think the title could have been 100 times better with Lowe on the team, but it is what it is.

The classic series was in an adventure game format in the same vein as King’s Quest or Space Quest. You had to find objects to unlock doors, solve puzzles and generally think your way though the game. The new game is basically a series of mini-games where fast fingers win the day. I guess this is what the new generation of gamers want.

So, if you are no good at pushing up arrow, down arrow, left arrow and right arrow in quick patterns, you should probably stay away. I normally suck at games like that, but there is an auto-leveling system in place here. If you fail too many times, you can make the game easier for you. If you still can’t pass, then you can buy your way though it with accumulated tokens.

You are not the infamous Larry, but his nephew. The new Larry is not quite as hapless as his uncle. He is just a short, clueless college kid who really wants to sleep with beautiful women but has no clue how to do it.

You explore the college campus and surrounding town in a 3D interface. It purposely looks a bit cartoon-like, but there are a lot of details. When you see a main character girl, you can strike up a conversation with her. In this mini-game you try to maneuver a sperm cell through a gauntlet of bad sperm-harming objects, touching smiling faces along the way. When you hit the right spots, Larry says the right things in his conversation. When you hit the wrong spots in the side-scrolling maze, Larry says something really stupid, though this is normally really funny. Your job is to woo the girl enough so that she likes you, where upon you can move to some more intimate mini-games like strip trampoline or quarters.

Despite the subject matter, there is actually a ton of humor in the game. You should see the dance routine Larry does (with your help in mini-game format of course) for Lesbian Nights – to the tune of Summer Nights from Grease. I must admit I was rolling on the floor laughing with that one.

Larry is directed to the various girls on campus by a game show hostess. To meet more girls, Larry becomes a contestant on the show, where the object is basically to bed college girls. Don’t laugh, it’s a lot better really than most of the shows on the Fox network.

If you can sleep with three girls, you advance to the next round, though sometimes you don’t actually get to "sleep" with them depending on circumstances like mob boss fathers, their insanity or the fact that they are actually a man in disguise.

My second favorite girl Tilly actually is taken out of the running, something that kind of angered me a bit. But I ended up with uber-babe and fellow nerd Morgan, which made me pretty happy.

In addition to the cartoon babes, you also will see real girls in the load screens. Apparently every girl in the game is based on an actual real babe. And seeing them in skimpy outfits makes the load screens the waiting a lot better. I can’t recall if the game had long load times or not. Perhaps they were not long enough!

The game is rated "M" for a host of reasons including sexual themes (duh), alcohol use (plenty of it), language (the bad kind the FCC tends to hate) and nudity.

For me, the new Larry became a guilty pleasure, and I am not very good at mini-games. So if I can bed Morgan, I am pretty sure most of you out there with at least some familiarity with pushing buttons can too. Just don’t expect a true adventure game of old.

Oh, and the game has a lot of fun with sex and sexy situations. If this type of thing makes you even the least bit uncomfortable – like if watching old Benny Hill reruns sends you to confessional – might I instead suggest to you something with a more Sid Meier flavor.