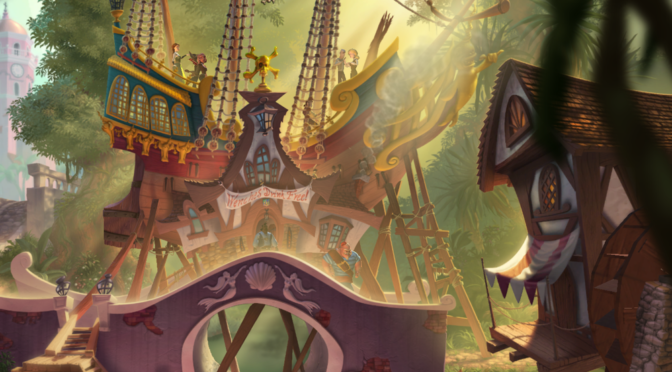 The legacy created by LucasArts has stretched farther than any hyperspace drive could ever go. Since helping to create critically-acclaimed titles and series, many an alum has since moved on, founding their own companies and putting out their own titles, which still have that unmistakable LucasArts flavor. “Duke Grabowski, Mighty Swashbuckler” is one of those games.

Only this game has a double “LucasArts effect.” Bill Tiller, co-founder of Venture Moon Industries with Gene Mocsy and Jeremiah Grant) was the lead artist on many classic titles (including one of my favorites, “The Dig”). In forming his team, he brought in many of his former co-workers at LucasArts. This turned out to be a great move, as they managed to produce for their first title a game that is nostalgic of those classics that we all loved to play.

The game starts on the ship of which Duke is part of the crew. Alas, Captain Amerigo has died on their last mission (which you can see in the background art of the opening credits), and the first order of business is to elect a new one, since they can’t go anywhere without a Captain. Many crewmen throw their sword on the pile (I guess they don’t all have hats to throw into a ring), including our hero Duke Grabowski. Unfortunately, though Duke is very big and strong, which serves him well for many pirate duties, he is none too bright, and none of the crew want him to be Captain.

The First Mate (and favorite for the next captain) suggests that Duke prove himself Captain material by wooing women as well as their dearly departed leader. He tells Duke that if he can seduce three ladies while the ship is stuck in Bodacious Bay, he would support Duke Grabowski for Captain. Of course, the First Mate just wants Duke out of the way while he secures his position with the crew, so he is elated when Duke agrees to this impossible task of “sea-deucing,” as Duke calls it.

The interface is familiar for anyone who has played a point-and-click adventure game. When you move the cursor over an interactable object, it turns into a tiny skull-and-crosbones. Clicking on it will bring up the interaction menu, which consists of three circular icons. Click again on one of these will allow Duke to speak (mouth), examine (eye), or physically interact with the object (hand). For those who have trouble finding these click-points, pressing the space bar will make them all show up at once.

If the object is a person, clicking speak will start a dialogue where you can select one of several sentences to say to them. Of course, I’ve never played and adventure game where the developers didn’t want you to eventually go through all of the dialogue options. In this case, they will either allow access to something, provide information you need, or at the very least be entertaining.  I should also point out the voice acting is on the mark – everyone does a decent job of portraying their character. However, the nature of the video game voice-acting beast is the actor is required to give their lines in such isolation that expert engineering is required to make it seamless. Unfortunately, in this game there are places where the seams show a bit.

When you interact with an object, sometimes it will end up in your inventory. This can be brought up by pressing the “I” key. Clicking on an object there will also bring up the menu; clicking the hand will let you use the object on something in the scene, or even another item in the inventory to combine them if possible. If an object is too big or heavy to take until you know where to use it, or represents something abstract (like a companion’s skill), the object will actually be the idea of the thing, shown in a cloud to demonstrate this. These “object ideas” work just like any other object though.

The gameplay is fairly open-ended. You can go to the different parts of the island and solve the various puzzle chains in any order you choose. There are parts of some puzzle chains that restrict you to certain areas until you solve that portion. But these are rare, and once you’re through you are back in the sandbox.

The one major complaint I might register for Duke Grabowski, Mighty Swashbuckler is it seems too short. When I got done Steam clocked me at two hours of gameplay, and that was with me taking time to enjoy the artwork and use all of the dialogue options. The developers definitely set this up as the first of several episodes, a la Telltale Games, but they’ve made no mention of any further adventures. Perhaps Venture Moon is waiting to gauge the game’s popularity before committing to a series. If there is a vote, though, please add mine to the ‘Yea, argh!” column.

Duke Grabowski, Mighty Swashbuckler is definitely worth your time and money. And if you fondly remember the days of Lucas Arts, or like anything that it’s alumni have done since, you will definitely enjoy this one. It quite handily earns it’s rating of 4.0 GiN Gems.