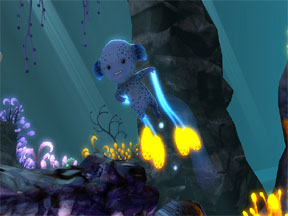 There are games that take deep thinking, strategy and skill to play. Mastering them is a lot of fun, but takes a ton of upper-level brain power. Then there are games like The UnderGarden, which are more enjoyable when you dim the lights, pour some Chianti, and sit back and enjoy the ride. And really, the Chianti isn’t necessary.

The UnderGarden takes place underwater. The developers have hinted at the fact that the garden may not actually be underwater, but it sure looks that way to me, and despite hours of gameplay, I’ve not found out otherwise, or discovered any type of plot actually beyond the gameplay. This is not a bad thing. Again, this is a game that brings out the "relax reflex" in all of us.

Your character looks like a sea monkey, or at least how those sea monkeys did on the packaging when I was a kid, you know playing volleyball, having picnics and climbing mountains – not like the brine shrimp they actually were. Your little monkey creature begins in a portal area where you can swim around and then jump to the actual game levels. At first, only a couple portals are available. As you complete levels, more difficult worlds will become unlocked.

When you first arrive at a new level, it will be a pretty dark place. But one of your sea monkey’s powers (yes, I am now officially calling him that) is the ability to pollinate the surrounding area. There are plants that spew pollen when you run into them in huge, heaping clouds of the stuff. By touching these clouds you can soak up the pollen. Then when you touch the sides of the underwater levels, something magical happens. The world springs to life in brilliant, beautiful colors. It’s like Las Vegas springing up out of the desert.

Your monkey only has a limited amount of pollen that he or she can carry. But you get a pretty big reserve, and those pollen plants are fairly common. As long as you keep your eye on your pollen meter, you should not have any problems running out.

Besides the scenery plants, there are also several special ones that can be grown, and will need to be grown, to complete the various puzzles. One is a fruit tree that creates heavy yellow fruit. If you lug the fruit over to a pressure plate, it will hold it down for you, which normally allows you to pass further into the level. Another is a balloon tree that makes floating fruit. These do the same thing, but for plates on the ceiling. There are other special plants that you will discover as you play, like ones that create exploding fruit to clear obstacles.

One of the coolest things about The UnderGarden is that it’s a two player game. You and a friend can both become monkeys, and play together, swimming happily across the screen at the same time.

The puzzles in the game are moderately difficult, and ramp up well as the game continues. New elements like darkness and strong currents make some challenges more difficult in later levels. Everything is solvable, but getting 100 percent on every level is a huge challenge if you are up for it.

In a way, the game play in UnderGarden is very similar to that found in Little Big Planet. In fact, I was tempted to call UnderGarden "LBP Underwater," but there are some major differences. Because you are underwater, there are no jumping puzzles in UnderGarden. If you see something above you, just swim over to it. There might be some gates between you and the object, but gravity won’t be too much of a problem. Also, the gameplay in UnderGarden is, in my opinion, a lot easier. I played LBP with a novice gamer and they quickly became frustrated as the difficulty increased. With UnderGarden, we could keep playing for a long time and that frustration never set in.

Another element that is huge in The UnderGarden is the sound. I was so happy to have my PS3 hooked up to my HDTV via an HDMI cable to get the best possible experience. The graphics amazed me of course, but the sound is absolutely incredible too. It’s even been integrated into the gameplay. There are these little musicians hiding in the garden. They look almost like your sea monkey, but a bit smaller. Each one plays a different instrument like a flute or drums. You can drag them along just like you do with fruit. And as you put more and more of them together, the layers of sound increase. The first time you realize this you are going to be impressed. And when you get a full orchestra together, well, it’s some of the best sound I’ve heard on any PS3 game, and especially for an inexpensive downloaded title. Although the game does not have goals per se, I made an effort to find and gather all the musicians in each level just to hear the great soundtrack.

You are scored at the end of each level by what percent of underwater flora you’re able to get blooming, how many musicians you find and touch (but you don’t need to gather them together like I did) and how many crystals you can find. Each level has at least one hidden crystal. Some of them are literally hidden, others are in plain sight but require intricate puzzles to be solved to get at them. There are also some extras you can earn, like funny hats for your sea monkeys. Again, this conjured up images of Little Big Planet, but everyone likes earning silly outfits, so that’s probably almost a universal trait for games today.

The UnderGarden can be picked up on the PS3 Network for just a couple dollars. It’s also available as a PC game which you can buy from Amazon at the link above this review. It’s more than worth the money, and nice to find a game where you actually will probably think you got more value than what you paid for.

The UnderGarden swims to a great four out of five GiN Gems. Once you poke a toe in these waters, you will want to dive right in until you are soaked in the beautiful graphics, sound and gameplay this hidden treasure offers.