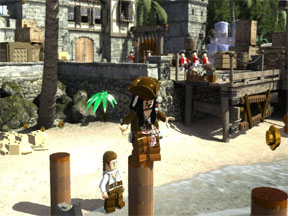 Lego Pirates of the Caribbean

There are a few series of games that never seem to lose their speed. And the Lego titles are definitely one of them. Admittedly there have been a few slight missteps along the way, but nothing like that is evident in Lego Pirates of the Caribbean, a rousing game that proves fun for all ages.

The game follows the events of the movies from the first one through the current blockbuster. I had forgotten a lot of the plot points in the original movie until I played this game, and they all came roaring back. That’s a pretty big deal considering the entire world here is made up of legos.

Obviously, all the main characters from the story are represented. And so are a ton of unlockable support characters too. In fact, there are 70 which can be played over the course of the adventure. You will earn many of them while simply playing, with each being introduced at the point in the story when they become important. Others can be bought by spending some of your hard-earned loot.

I have to say that the various characters are well-represented here. Jack Sparrow for example, runs just the way the character does in the movie, with a combination, somehow, of an effeminate and tough guy stance rolled together. Although the lego people don’t speak, they do grunt and mumble, and the Jack Sparrow character sounds a lot like Johnny Depp. So although it seems weird to say, the acting is pretty good.

One of the secrets to the game is that each character has different abilities. Some of them can walk underwater, some have ranged weapons, some can fix equipment and some can jump higher than others. The trick is to employ the correct character at the correct place. And not every level can be completely solved when you get to it initially, because you have not unlocked a character with a special ability that is needed. It won’t stop you from completing the storyline for that mission, but treasure might be hidden just beyond some steel bars that you can’t blast open or high on a shelf out of reach because you’ve not unlocked a character with the skill you need. Thankfully, you can replay levels from the game’s hub, which is a space called the port where you launch your adventures.

The gameplay itself is a combination of exploration, puzzle solving and combat.

Addressing each one separately, exploration consists of moving around the various maps, discovering hidden areas and fun things to do. One of Jack Sparrow’s powers is the ability to use his magical compass to direct him towards hidden loot. But besides that, there are a ton of hidden things in every level. You might find yourself collecting blocks and building a little ship, only to smash it for even more points once it sets sail. You may need to fire a cannon to blow open a gate, or swing from a chandelier to get to a balcony. There is a surprisingly detailed amount of things to do everywhere. And when you find something new, it’s almost always accompanied by the satisfying cling, cling, cling of raining lego blocks (which are used to score points and as currency) which gives you instant satisfaction. It’s almost like a very good night in Vegas that way. Anyway, the replay value is really good if you are willing to replay levels (they are fun enough that this won’t be a chore) with new characters to discover all its secrets. And there is a log of content spread across four movies even if you only do each level one time.

The puzzle solving elements are not too difficult, but can be challenging. The cleverest thing about the game is that it somehow finds a way to issue challenges and hints without using words. For example, if you need to motivate a horse to move, then when you get near it you will see an icon of a carrot. Then you know that somewhere nearby there must be a barrel of carrots, which can be brought to the animal. Of course once you ride the horse, there may be more puzzles, but they are not too taxing, yet, are not so easy that they don’t require some thought. Also, I’ve seen various players solve the same puzzle different ways, which although rare, can happen.

Finally there is the combat, which is pretty action packed. Some characters have unique styles of fighting like giant hand cannons, while most employ a sword of some type. You can even use the environment in some cases, rolling over opponents with a barrel or trampling them with a horse or pig. One thing to note is that you can damage your friends, so you need to be careful of friendly fire. I saw two human players get into a fight over this at one point.

Also, it’s important to let parents know that there is no blood or gore. Everything is made of legos, so when you chop into a British soldier or a rival pirate, they burst apart into their component pieces, which is almost as satisfying as when you get showered with point bricks, and a lot more humorous.

A final note on gameplay is that this is one of those rare games that, thankfully, allows two people to play together. I had to hook up my PS2 to play all those old classics like the Champions of Norrath or Baldur’s Gate series because of the dearth of good local two player games for the PS3. But here is one that works great. For the most part, you and your partner are on the screen at the same time, but if you should drift too far apart, it automatically splits. And it does it in a way that is pretty unobtrusive and not even all that obvious unless you should drift really far apart, whereupon it becomes more of a traditional split screen. I played this game with my wife and also with friends, but it would also be great for a parent and child to play together. It could be one of those experiences your kid remembers for a long time, whacking pirates with their mom or dad.

I’ve already mentioned the sound effects in terms of the grunting of the actors. But that is totally blown away by the music. The Pirates movies have a great score, and that is reproduced quite well here. When you hear it playing, you get excited and want to dive into the game. That is matched by the graphical flair, which again, is quite an achievement to somehow create the world of four movies totally in legos and have it look almost perfect.

Pirates of the Caribbean is a great title and a perfect way to relive the adventure of the movies. In fact, this game could easily standalone without the accompanying movies and be a really great way to spend your time. It’s more fun because we can relive the adventure, but I wanted to stress that this title is far beyond any movie tie-in type game. In fact, it can fill its chest with 4 and a half GiN Gems, a great way to sail off into the sunset.