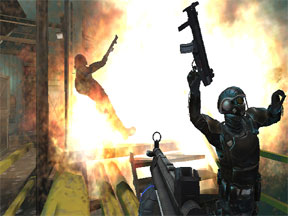 Shooters on the Wii are, unfortunately, few and far between. There have been a few good ones like the James Bond game which recently won Game of the Year for the platform, and other titles like a modified Call of Duty have eventually made their way to the Wii’s shores. But Conduit is still one of the few series created from the ground up for this platform.

Conduit 2 is developer Sega’s follow up to its 2009 shooter, The Conduit. The story for this game takes place immediately after the end of The Conduit. Unfortunately, no effort is made to give new players any of the story from the first game.

Playing once again as Michael Ford, the player is thrust immediately into the game. He is told to enter an open conduit by Prometheus, a helpful alien, to once again save the world from the evil John Adams, a powerful alien who has destroyed Washington DC.

And yes, that is his name. And no, I don’t know what that’s about. That’s the story of Conduit 2. There isn’t much to it.

The voice actors speak their lines with a minimum of emotion, so that Michael Ford comes across as a bored tough guy rather than a guy trying to save the world. Evil John Adams sounds like canned bad guy out of an early James Bond film. He likes to taunt Ford over loudspeakers and from randomly placed video screens, but the taunting is so generic as to be almost, but not quite, funny.

Despite a lackluster storyline, the mechanics of Conduit 2 work well for a shooter and most importantly, gameplay is very customizable. A word of warning, the factory settings are very sensitive, so if your hand trembles at all, the game is going to nauseate you pretty quickly. Tone down the sensitivity if you’ve had too much coffee before you play.

Like all shooters, Conduit 2 offers a variety of weapons to chose from and pick up as you play, as well as suit upgrades and the like that are available after you finish off Adam’s Drudge soldiers and return to the Atlantis hub.

If you’re an experienced game player, particularly if you’ve played a lot of shooters, you’re going to blow through campaign mode (no pun intended) in five or six hours.

Where Conduit 2 redeems itself and actually has replay value is in its Splitscreen and Online Multiplayer modes. Suddenly the lackluster storyline is less important as you play with up to four of your friends, or online with a host of other people.

I appreciate the ability to play offline with friends. Too many games don’t offer that option and it raises the value of Conduit 2, if you don’t want to go online or you don’t want your children playing online with random strangers.

In short, Conduit 2 is a rather generic shooter. The developers didn’t do anything wrong, but they didn’t seize on the opportunity to take this game to a new level either. Simple things like having a cut-scene at the beginning of the game to give new players some idea of the storyline or having the voice actors give a bit more effort in their performances would have elevated this game considerably.

As it is, you can skip the campaign mode entirely and go right to splitscreen or online multiplayer. That’s where the real fun happens. And that’s where Conduit 2 earns most of its 3 out of 5 GiN Gems.