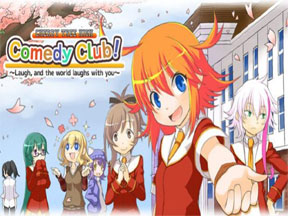 We’ve all seen it. A comedian walks on stage and goes right into his monologue. The first joke he tells doesn’t land. No problem. He’s only getting started. Then after a few moments, it becomes painfully clear that it wasn’t just the first joke that was bad; all of them are.

This is the feeling I got while playing Cherry Tree High Comedy Club. Much like a new comedian stepping on stage, I had no idea what I was in store for. Unfortunately, this act wasn’t very good.

Players take on the role of Miley, a high school student who’s tasked with starting a comedy club at Cherry Tree High. There are a few obstacles standing in her way, however. New clubs require five members, and Miley only has until the end of the school year to recruit three more people. With only a month of classes left, it’s up to the player to guide Miley around Cherry Tree Town and convince her fellow students to join the cause.

That’s the premise of the game, and if it doesn’t capture your attention, nothing Cherry Tree Town High Comedy Club has to offer will. The game is so heavily weighted towards its story that gameplay suffers immensely as a result.

Players run around the pseudo-Japanese town talking with potential club recruits. In order to gain their friendship, you need to choose a topic of conversation that engages the character, with everything from video games to gossip an available option. It’s not as simple as choosing the right topic for the right person though. Miley needs to be sufficiently well-versed in each category to make an impact.

To improve her skill, players can direct Miley to a number of different areas. Watching television or reading a magazine in the library provides a random stat increase, while purchasing a magazine from the bookstore levels up a skill of the player’s choosing.

Taking the time to perform these actions causes the three-part day to advance ahead a stage, with certain options becoming available during different times of the day. In the afternoon, for instance, Miley can clean the town shrine for extra money, which players can then use to purchase magazines or other items.

Through the course of the game, players also have to manage Miley’s fatigue and homework levels. Sleeping or eating reduces fatigue, while working or completing homework assignments raises it. That’s pretty much all there is to it. The game is essentially one of time management, but without the difficulty of a traditional time-management sim.

Worse, the actions players take don’t actually require any skill. For example, having Miley make jewelry for extra money doesn’t actually require players to do anything. Just direct Miley towards her table, and the next image to show up is a notice of how much money she sold the jewelry for. No task to complete. No items to go seek and find. Just hit the space bar when Miley is next to the table, and it’s done.

That epitomizes the problem Cherry Tree Town High Comedy Club has: it has no idea what type of game it wants to be, or even if it wants to be a game at all. It’s one part adventure game, one part time-management sim and one part interactive manga, but it pulls the worst elements from these things.

The adventuring is simply walking and talking, and the time-management aspect doesn’t feel as though is yields any type of real reward. The story caters to a niche market as well, with sequences of dialog that just don’t know when to end.

There are some positive elements to the game. The art style works extremely well and features a wide color pallet that pops through every scene. Although the backgrounds are static, they’re brilliantly crafted and make the game look like a manga come to life. Character models are also highly detailed and well-designed.

In terms of audio, the game’s music instantly brings back memories of classic Sega Genesis games and others of the ilk. (Sorry Nintendo fans. I was a Sega kid.) While nothing really stands out about the music and sound effects, they do serve their purpose and complement the overall atmosphere of the game.

Those little touches are too little too late, though. The game simply lacks the quality to stand out in the crowd, particularly when it comes to gameplay. Fans of all things Japanese may find some enjoyment in the atmosphere Cherry Tree High Comedy Club creates, but from a gamer’s standpoint, there are plenty of other games out there to put your money towards. The game isn’t even full-screen.

With so many outstanding games on the market right now, it’s difficult to recommend Cherry Tree High Comedy Club. The game suffers an identity crisis, and ultimately, it feels more like work than leisure.