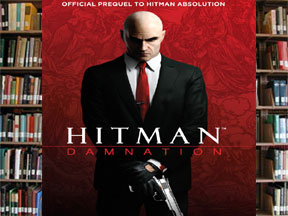 In Hitman: Damnation, writer Raymond Benson creates political satire and humanizes Agent 47 by giving him two personal dilemmas. The unflappable bald assassin with a barcode on the back of his head must deal with a pain killer addiction and lying to a love interest. The pain killer addiction makes sense given the extreme injuries most characters endure in the course of game play. The love interest is something Agent 47 has never really had in the games.

Benson inserts this love interest inside a fast moving assassination plot. Benson is known for writing thrillers and most notably for being chosen as the first American novelist to pen new James Bond books. He brings that skill to Hitman: Damnation.

Agent 47’s romance is set up by using the disguise option in the game as a plot device in the book. Agent 47 must go undercover and wear the uniform of a groundskeeper for a rising political personality, Charles Wilkins. While undercover he meets the troubled Helen.

Charles Wilkins, who is slowly revealed to be more than what he seems, is also Agent 47’s target. Wilkins is a cult leader who has orchestrated a long-term conspiracy that is revealed to have stretched over three decades. Helen is his assistant.

Helen’s inner monologue is well done and shows what type of damaged person becomes entangled in a cult. The way she begins to care for Agent 47 and the way he, in a sadly limited way, responds is touching. They are two broken people, whose sharp edges almost, but not quite, match.

It’s too bad the video game itself did not take advantage of this type of storyline rather than promote itself using the misogynistic and frankly fetishistic like film trailer for their newest addition to the Hitman franchise, Hitman: Absolution. Agent 47’s humanity in the book invests me more in the character, which adds a level of urgency to the game.

Benson, like Karen Traviss (Gears of War) and Drew Karpyshyn (Mass Effect), is a game writer. He worked on Ultima VII and various other games in the 90’s. His most recent writings are his stand-alone novels about a 50’s female costumed crime fighter, The Black Stiletto. It’s too bad he wasn’t a writer on Hitman. He could have contributed a deeper, less misogynistic back-story to the game.

In short Hitman series fans should read this book. It actually enhances the game by connecting you more personally to Agent 47.

Even if you’ve never played the games, Benson is a skilled enough writer that this book stands on its own merits. You should check it out.