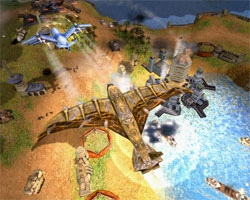 There are two elements to strategic thinking. The first is strategy itself, which is the ability to plan, to see the overall picture, and navigate the many paths that lead to victory before ever setting foot on the battlefield. The second element is tactical, which is the ability to react on the fly to changing conditions and respond appropriately so that victory can be won. Either path can lead to victory, but they are really two different skill sets. General Bernard Montgomery was a strategic thinker. General George Patton was a tactical one.

I don’t want to get into the real-time versus turn-based war game debate. But I will say that for the most part RTS titles have a little strategy and a lot of tactics. And turn-based games have a little bit of tactics and a lot of strategy. With most RTS games you have to react to your enemy so quickly that you don’t have much time to follow an overall strategy other than "go here, destroy this base." As such, I generally prefer turn-based games most of the time, though they too have their flaws as they can be a lot more boring than the adrenaline rush a good RTS provides.

There are a bunch of popular RTS franchises from Age of Empires to Command and Conquer to Warcraft, but not as many memorable turn-based games. In terms of market share, RTS has beaten turn-based for years, which is not a surprise in this world of gamers addicted to instant thrills.

But for you strategic players out there, sometimes a gem does come along that might just please both crowds, and Galactic Assault: Prisoner Of Power is one of them. The game follows Massive Assault in more ways than one, but going back even further, I see a lot of an older title called Fallen Haven in this one too.

The plot of the game is that various factions are at war with one another, with each one trying to escape an alien planet. It’s based on a sci-fi world created by the Strugatsky brothers, which not many people in the US probably know, but who are very popular in Russia, where developer Wargaming.net is located.

Since I am comparing the game to Massive Assault, this is a good place to make comparisons. In Massive Assault you moved your somewhat limited units around the board almost like chess pieces. There were a variety of surprising moves you could do within the rules, like loading a unit onto a transport and then moving the transport, unloading the unit and getting their full move on top of the transport’s move, which was used against me time and time again online. But for the most part, these surprises were mostly tricks used on newbes that only lasted until an opponent had a little skill under their belt, and some bruises from lost engagements.

That was my biggest problem with Massive Assault: there were these hard and fast rules that could not be broken. As such, the world was rather 2D. The winner was someone who understood the rules better often times, not necessarily the best strategist.

Galactic Assault changes that, without sacrificing the overall gameplay mechanics. It does so by adding new elements to units, like morale and terrain bonuses. No longer is an invasion a series of simple mathematical calculations where one unit will always damage a certain enemy to half its hit points in a round while the next unit will finish it off. Instead, you have different units with different morale scores. An elite unit might have a very high morale, and do maximum damage each time while that same unit after suffering a lot of damage, might only be partially effective, or not effective at all. Of course you can research technologies that improve morale, and units can beat feet back to base for healing too.

No longer is it just a game of a few units with set characteristics and players matching them against one another, almost like a puzzle game. In fact, there are seventy unique unit types including infantry and armor, airplanes, ships and submarines.

Like any modern battle, artillery plays a big role in combat. Given that in real life the Russian Army doctrine relies heavily on massive artillery strikes, it is not a surprising element to find in a Russian-developed title. In fact, I have almost come to expect this in any game I unwrap that comes from Russia with love.

Here though, artillery deployment is extremely well done. While artillery has a range, that range can change depending on the terrain, with cannons placed higher up able to shoot further. This reminds me of Fallen Haven a bit with the differing ranges, though there the developers at Interactive Magic simply cheated by letting the alien artillery fire one hex further than yours, which was annoying. Here, whoever gets to the high ground first and sets up their big guns is going to have a real advantage.

Also, if any of your units are attacked while within the range of artillery, they can call for support (up to a set number of times per turn) which means that not only will an attacker be subjected to return fire from the defending unit, but also from the supporting artillery. This was a technique the US perfected in real life during the Vietnam War, and it’s nice to see it brought into the game. Artillery is powerful, but not invincible though. It can be taken out by airpower, other artillery or any unit that is able to get close in to tangle.

Terrain also plays a major role in battles, because forested areas and scorching deserts slow down units. And only infantry can cross swamps and really steep slopes. Weather too plays a bit of factor, which affects line of sight.

Graphically, Galactic Assault looks pretty good, one of the best TBS titles I have seen. The obvious comparison here is Heroes of Might and Magic V, which is a little too cartoony for my taste. Here the terrain looks real, but alien, which I think is what the designers were going for.

Finally, although this is a turn-based title, it is not boring. While you can take as long as you like to move, the computer can zip through its turn fairly quickly, so there is not much waiting. Also, units fire at the same time, so you are not simply sitting there taking hits from the AI and waiting for your turn to punch back. Units in range of one another can normally simultaneously shoot at each other regardless of whose turn it is, and that includes artillery support fire. So there is rarely a dull moment, even as you are considering your overall strategic goals.

Galactic Assault does what turn-based games have been trying to do for a long time, which is to provide a true wargame at the strategic level, but with enough tactical excitement to keep it from becoming a simple chess match of rules and mathematics. And yet it is not as complicated as say, Hearts of Iron (the original version), so even most beginners can get into it. But the bottom line is that if you like strategy type games, there is no way you won’t like Galactic Assault.