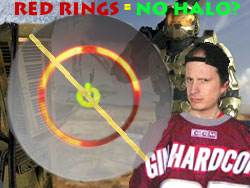 It's been almost two years, and despite hearing report after report of the Xbox 360's high failure rate, and in particular, the Red Ring of Death, my system defied every attempt to show signs of failure.

However, two weeks ago during my initial test runs of Bioshock, the first signs of death began to show. At first the game froze up and all I heard was what turned out to be my DIRECTV receiver. My first impression that it was part of the game, an attempt to mess up my mind in the same way Psycho Mantis caused my screen to black out in Metal Gear Solid. But when it wouldn't come back on, I knew there was a problem. Several attempts to play Bioshock, as well as some other titles, led to the same result: freezing and my sound receiver switching back to DIRECTV. But one final attempt to boot up my 360 resulted in the inevitable Three Red Lights (aka the Red Ring of Death.)

In an instant I called Microsoft's Xbox support line, and they had me go through the same process over and over again, unplugging all the components and power cables, but all led to the same result: the Red Ring. As a result, my 360 was slated for repair and a shipping box (known by many in the 360 community as "The Coffin,") was heading my way via UPS.

A day passed, and by instinct I decided to give my 360 another try. Since I had a Bioshock review to do, I didn't want to leave it for a long period of time nor did I want to give it to anyone else to review. (Since Chris Richards got rights to The Darkness, I wanted rights to Bioshock.)

This time, not only did the 360 power up fine, it didn't even freeze up nor switch to the Red Rings. I thought I was in the clear, and would have the opportunity to play Bioshock and complete it in order to write a review. And should the Red Rings ever occur, at least I would have a week's head start as a coffin was on its way.

Well, fast forward to the following Monday night. I was able to complete Bioshock, even if I got what many consider the worst ending for rescuing all of the Little Sisters as opposed to harvesting them. So with that out of the way, I decided to play a quick game of Space Giraffe before bed. Sure I was able to play, but only for ten minutes, as the lockups began again, but at a much quicker pace; they even occurred during the bootup screen, and finally giving me the Red Ring of Death. But this time, it was permanent.

The following day, my coffin arrived, and it was a sad moment as I removed the Steelers faceplate on my 360, replacing it with the stock white face, disconnected my 120 GB HD, bagged the 360, applied the form-fit padding, and sealed my box.

That Wednesday was the last time I saw my 360, as it was shipped to a Texas repair facility.
And that's where it's been for two weeks. Every time I have checked the Xbox Service web page, it says the same thing: Device Received at Service Center. The question is, whether it's being repaired, or just sitting in a warehouse, probably somewhere near the Ark from Indiana Smith?

I'm hoping the former because I was told by the service rep that it should be back in time for Halo 3. If not, they have a lot of explaining to do, and I'll be demanding a lot of Microsoft Points to be added to my account, not a free month of Live like others have been receiving.

I'm already paying for a full year! At least the repair will be covered under warranty.