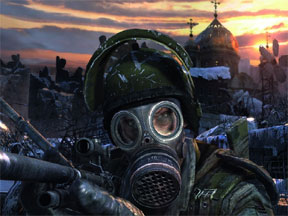 The original Metro 2033 was one of my favorite games of 2010. As the sequel to that title, Metro: Last Light (originally called Metro 2034) picks up pretty much where the original left off. The sequel does assume that Artyom, the main character, helped to launch the missiles that destroyed the Dark Ones race. This happened in the book of the same name by Dmitry Glukhovsky, which was published in open source as a free title in 2002. You get an electronic copy of the book with the Last Light game through Steam on the PC if you look in your Steam install folder. The book is really good by the way, so it’s a nice bonus. Anyway, in the video game you could have chosen to side with the Dark Ones and not launch the missiles, but Last Light assumes you carried through on your mission to hold the laser guidance beam in place from the top of the TV tower, which really, I’m not sure why anyone wouldn’t.

Last Light finds you back inside the Metro, where humanity retreated to when a Nuclear War turned Moscow and the rest of the world into a poisonous wasteland a generation ago. The Dark One attacks have thankfully ended, but the surface remains uninhabitable, and the major factions within the Metro, the Communist Reds, the Nazi Fourth Reich and the Hanseatic League (more commonly known as Hansa) are all at each other’s throats again, with the Reds and Nazis stirring up the most trouble.

But for Artyom, he has become a Ranger. Known as the Spartans, they exist to protect humanity from mutants, and don’t play politics. They are based in the Polis stations, which are underneath Red Square. Mostly they fight bandits and mutants, though they are thrust into a power-play when they discover a previously unknown bunker in the metro tunnels known as D6. If you recall, D6 was the bunker where the unfired nuclear missiles were found in the first game, which were launched against the Dark Ones. Now the Rangers have moved in, and are in the process of unsealing many of its locked and sealed doors, trying to determine exactly what is inside, and how do distribute the wealth to the benefit of the entire Metro.

However, a spy leaks the news about D6, and the rest of the Metro, especially the Reds and Nazis, don’t seem to want to wait for, or don’t trust, the Rangers to do the right thing. The discovery of D6, which is rumored to contain everything from massive food stocks to futuristic weaponry, is pushing the entire Metro into war, with the Rangers trapped in the middle of it.

That does not seem to affect Artyom, at least at first, as he is given a new assignment. A baby Dark One has apparently survived the nuclear blast, and he is sent to kill it. His friend Kahn thinks the Dark One could be the savior of the Metro, but he is overruled. It matters little because Artyom is ambushed on the surface by Nazis. The Dark One is stolen and he is captured. Thus begins your adventure trying to catch up with the Dark One as it is traded around, and to make your way through various metro stations and tunnels filled with enemies.

There is a really nice plot surrounding the game this time, and everything is not as it seems. Thankfully, the plot twists and turns, there are quite a few, are all grounded in reality this time. There are no head-scratching mental adventures this time around (other than perhaps one late in the game which actually makes sense) to confuse players. It’s more like a Hitchcock movie where you don’t really know who to trust or what is going on until the end. In fact, players may be unimpressed with the overall plot at first since it all seems so straight forward, until they learn later what is really going on at different levels. Some secrets aren’t revealed until the very end.

I also liked that the game was sufficiently adult in nature. Life is hard in the metro, and the game world reflects this. There is a lot of thuggery in the stations, and outright banditry in the more out-of-the-way tunnels, which you can confront. If you explore some of the side paths, you can do a lot of good, like preventing a woman from being raped, helping out people down on their luck, finding a lost teddy bear or even sitting and talking a bit with a former newspaper critic who tells you of the grandeur lost in nuclear fire. There are some other adult situations too, like the ability to buy a private nude dance from a stripper. Many stories and unrelated side missions are told if you take the time to explore everything. There is even a full theater presentation that you can watch, which takes about ten minutes to complete. You earn a trophy if you watch the entire show. But my favorite extra is at a bar in one station where there’s an ugly old woman sitting at one end. If you buy a strong drink, the next time you look at her, she’s a beautiful young girl instead. I had to reload just to be certain, but sure enough, the "beer goggles" effect wasn’t in my mind. It’s so nice to see developers adding little touches like that, even though not everyone will notice them.

There are even a couple vehicle-focused levels, including one where you get to ride a tricked-out rail car that reminded me of the airboat from Half-life 2. It was a lot of fun, especially since some of the best side questing can be done if you stop and hop off every now and then to explore side tunnels.

The combat in the game is fluid and realistic. Shots that should kill an enemy, like a .44 magnum round to the neck or head, do just that. Guns have a natural progression in the order that you find them, which goes along with increasingly equipped bad guys or stronger mutants. For example, you might start with a single barrel shotgun. Then upgrade to a four barrel model. Then you might find one of the tube models which can hold six rounds. And finally, near the last half of the game, get the automatic shotgun with a 40-round clip. Every weapon is also upgradeable at a merchant with extras like night sights, laser pointers, silencers and stabilizers. So you have to make some decisions about when to trade in your tricked-out lower-tier weapon for a plain vanilla model that is generally better, but not supped up. I found that it’s always best to upgrade if you can, and enemies often drop weapons that have at least some attachments which could make the pain of leaving your formerly favorite gun behind. You don’t have any skills to level up, so your choice of weapon and weapon upgrades will go a long way to shaping your perception of Last Light and your gameplay. There are even sniper rifles, but I never found too many good places to use them, being as much of the game takes place in cramped Metro tunnels.

I generally ran a stealth build, which meant silenced weapons and eventually night sights or powerful scopes. Your wristwatch has been simplified from the first game, but still tells you if you are hidden or not. But blowing out lanterns or finding how to turn off lights (or just shooting them out) is always recommended. In the dark, you can be a killing machine with your silenced firearms and throwing knives. Mutants are harder to hide from, and generally require more shooting to go down too, but the different levels, from inside to on-the-surface surface missions, mutant to human enemies and other variants keeps combat fresh and varied. There are even levels that are almost horror-survival in nature, like one where giant spiders are trying to kill you, and your best weapon is your flashlight.

You can carry up to three guns at a time, and I would recommend that you pick ones which fire different types of ammo, like a pistol, assault rifle and shotgun, since ammo is limited and that will extend your ability to operate outside of a station. You should be able to shoot whatever you happen to salvage that way too, since your guns are pulling from different ammo pools. Pre-war bullets are again used as currency in Last Light. You can load them into a weapon to get a big damage bonus, but I never used them like that since I found they were more helpful as currency to max out weapon improvements or to purchase buckets of lower-power ammo that still did the job for me.

Graphically, Last Light is amazing. Lots of cool effects have been added, like blood and gore splashing up onto your gas mask visor during close combat kills, which needs to be wiped away from time to time. The stations look great too, though some of the human models, especially the women, seem to be repeated quite a bit. Then again, perhaps I was just watching the women too closely. The water effects and surface weather are also really well done.

The sound is also great, with wonderful voice acting for every single character in the game. The voice actors not only sound Russian, (thankfully they speak English) but really bring their characters to life. So too the mutants sound pretty scary, which makes levels featuring them seem more difficult because of the fear factor.

Metro Last Light also has a satisfying ending. Apparently most people get a "bad" ending based on their actions in the game, with only 5 percent of the players on Steam getting the good ending trophy as of the writing of this review. I got the bad ending on my first play through as well, but I thought this was actually the better of the two, story-wise, and more in touch with the flavor of the books and the first game. I like it and was happy with it, since it gives you a revelation not shown in the other ending. I thought the so called good ending was a little too fairy-taleish, but you get a conclusion, and solid answers about the biggest mysteries of Metro, either way. If only Mass Effect 3 had such a great finale.

Metro: Last Light is one of the best shooters to come out this year. It trumps its predecessor in a lot of ways, and stands alone as an enjoyable experience even if you are not familiar with the first game or the book, yet offers lots of cookies to those who are. Solid gameplay, hauntingly beautiful graphics and a great storyline (especially for a shooter) puts Metro Last Light at the top of its class.