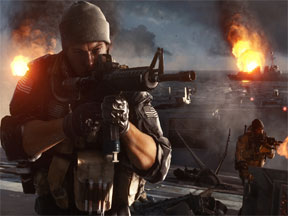 (Writer’s Note: The scores listed are based on the Xbox One version of Battlefield 4 which was reviewed, and should be the same for the PlayStation 4 and PC. For the Xbox 360 and PlayStation 3 games, take a half gem off for graphics, gameplay and fun.)

This is a very difficult review for me to write. I am writing this as someone who is more along the Call of Duty crowd, and all I heard online was the hate comments provided by fans of Battlefield demanding I give their series a chance. What they do not realize is that I played CoD mostly for the single player campaign because I felt playing online is unfair, especially when you are trying to at least get a foot in the door. No matter how hard you try, you always end up camped by a bunch of Level 50 elitists in CoD.

But what many people don’t realize is I have played Battlefield before, all the way back to Battlefield 1942. That game, too, gave me trouble with trying to compete it in single player. Good luck trying to take one step out in the open before you are ambushed by an invisible camper. Try to get into a vehicle? Don’t even give me a chance to get used to the controls before it gets destroyed. Even when trying to play the later games in the series that problem was never rectified. As a result, I labeled the series as ‘Camperfield’ and have been a harsh critic of it.

But still, I wanted to give Battlefield 4 a try. I really did. After the disappointment I had with Call of Duty Ghosts, and with Titanfall still a long way away, I really wanted to give Battlefield 4 a try. I wanted this so much in fact, that I tried it on both the Xbox 360 and the Xbox One. But still, after all these tries in getting back to it, I just couldn’t.

Even if I wanted to play it just for the single player campaign, the game itself is so vanilla and uninteresting that it became a chore to finish through, unlike the Hollywood summer blockbuster quality of the CoD campaigns, Ghosts included.

But we all know that Battlefield’s main strength is in its multiplayer, and Battlefield 4 continues that tradition. But with the update to the next generation consoles, games now feature up to 64 players (compared to 32 from previous generation.) While many people approve of that, I don’t because once again, it makes it easier for someone to camp me and not give me get a chance to fight back.

On the bright side, there is also a Commander’s Mode returning from Battlefield 2142 that adds an RTS based element into the run and gun action. It does help change things a bit for the better.

Then there is the Levolution mechanic: critical elements in each level that will cause a huge change in the gameplay. For instance, the Siege of Shanghai map features a collapsible skyscraper whose ensuing dust cloud covers the entire warzone. So not only do you have to deal with campers who are near invisible as they are, but also the environmental hazards.

But with those Levolution events come the one key reason this review has taken so long to be done, and why it is so difficult to write: all the crashes. I have seen moments on the PC version where a Levolution moment causes the game to crash back to Windows. Crashes have also appeared on the console releases, and even with a new patch, there were still issues that came up. It got so bad that DICE halted all work on their future games in order to get Battlefield 4 fixed, and several law firms have come after EA as a result. (Note that as of right now, none of the lawsuits have gone anywhere and most have been dismissed.) Anyway, I waited as long as I could to get this review done to give the game a fair chance, but time takes its toll and the review must come out.

Also if you all noticed at the start of this review I gave a lower score to the previous generation console releases for the graphics. The graphics out of the box are butt ugly on the 360 version, running only at 30 fps, despite requiring a 2 GB install. There is, however, a high definition texture pack that can be installed, which does help a bit, but be ready to give up 12 GB of hard drive space to get it installed. Thankfully the PC and next generation games look much better, and run at 60 fps.

Even with all these issues, Battlefield 4 is a competent online shooter. Fans of the series might do their best to fight through the game crashing bugs, but hopefully EA and DICE will finally be able to get them resolved and make the game much better.

PROS: Up to 64 players online on PC, Xbox One, and PS4. Destructible "Levolution" environments. Commander Mode adds an RTS element to the game.

CONS: Single player campaign is uninteresting. Only 32 players on 360 and PS3. Ugly graphics on previous generation (even after installing the HD textures pack.) Crippling bugs.