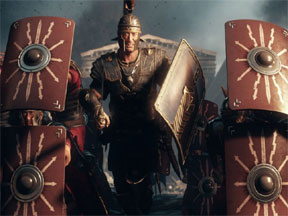 Ryse: Son of Rome on the Xbox One takes two steps forward with graphics, sound and music but more than one step back with the story. The gameplay is heavy with one on one combat along with some Roman era battles where you act as a centurion. The player’s journey is told in a flashback but the narrative has lots of missed opportunities and internal historical contradictions, some of which could have made for a great female character in a more gripping story.

The game’s visual mastery is accomplished through a partnership of Crytek’s Cryengine and their concept artists along with Imaginarium Studios. Crytek’s concept artists Ramon Contini, Silver Saaremael, and Kaija Rudkiewicz should be given special mention. According to Crytek’s bios on their website, Contini worked on the paintings of the vistas along with Saaremael. Rudkiewicz worked on the character designs. All should be congratulated. The Roman villas, Coliseum and British vistas are well done and stay in your minds eye after the game is over.

Crytek, a German company with offices around the world, is rightly proud of their accomplishment. Crytek’s senior rendering engineer Nicolas Schulz will be giving a lecture at GDC (Game Developers Conference) 2014 this March in San Francisco and will give insight into the development of the game.

Imaginarium Studios, founded by motion capture actor Andy Serkis (of Gollum and Planet of the Apes fame), used Vicon’s T160 cameras with some skilled British actors to make very visually convincing characters in some of the most realistic and bloody game violence I’ve ever seen.

The voice acting and the facial movements are excellent. Fans of the British show Midsommer Murders may recall the actor John Hopkin’s who plays the hero Marius. The player takes up the quest of Marius in his revenge on those that killed his father, a popular Roman Senator. In addition to Hopkins, Sebastian Abierni as Nero is a standout. Again, all this talent and technology could have been used in a better story.

If the ambitious company Crytek, who have won many graphics awards, and bought up gaming companies around the globe, had invested in some better storytelling this product would have been a knockout. As Gears of War and Mass Effect have shown, getting a good writer can get you great sales and strengthen a franchise.

Imagine if Karen Traviss, the novelist who was the lead writer for Gears of War 3, got to work with this company? Traviss has stated on her website that she believes games are the future of fiction. She has a military background, is British and might have had a great take on the game’s strongest female character, Boudicca. I hope some other gaming company is looking at this era in England’s history for more material. After all Tacitus and Cassius Dio have been dead for almost two thousand years and hold no copyright on history.

It is the historical contradictions that sink some of this game’s potential. Not that you should expect to write a history paper after playing a video game, but having British tribes invade Rome with elephants? Where did they get those elephants? Also the character of Boudicca is rewritten to the point of perjury. She was a renowned British historical figure who actually handed Rome some memorable military embarrassments before being defeated, although not from the back of an elephant. She had good reason for her rebellion and her story would have made a great game.

According to the Arthur Murphy translation of Tacitus, Boudicca, was, "disgraced with cruel stripes; her daughters were ravished, and the most illustrious of the Icenians were, by force, deprived of the positions which had been transmitted to them by their ancestors. The whole country was considered as a legacy bequeathed to the plunderers." He later writes, "Boudicca, in a [chariot], with her two daughters before her, drove through the ranks. She harangued the different nations in their turn: "This," she said, "is not the first time that the Britons have been led to battle by a woman."

What Crytek’s Kaija Rudkiewicz could have envisioned would have been excellent.

Instead, in the game, Boudicca is rewritten into a young woman whose father, King Oswald, is killed by one of Nero’s decadent sons Commodus. Boudicca lived in AD 60. Oswald was in the seventh century. Nero had no sons and Commodus was the son of Marcus Aurelius. Bizarrely, Boudicca fights with a pair of machetes and moves like someone trained in Kung Fu, strange for a Briton of her era. While taking a few liberties with the facts is fine, too many make for a jumbled confusing story and ultimately jar the player out of the game.

But enough about history, what about the gameplay? The fights are brutal and you unlock greater ways to kill as you gain experience. The combat is cinematic and gripping, although it can get repetitive if you play too long continuously. I think the breaks between the individual combat, when you act as a centurion in charge of a group of soldiers, are excellent.

When the armies move against each other it is breathtaking. These were the most interesting parts of the game for me. Ultimately though, Ryse: Son of Rome is a mediocre experience. With better storytelling and perhaps a tad more historical research, this could have been an amazing game. Alas, it fell far short of amazing.

Crytek is a young company that is growing and has great looking products. I hope that they invest in their narratives and get as innovative with their characters. The visual artists, acting talent and potential storylines they had with Ryse: Son of Rome could be used again with even better results.