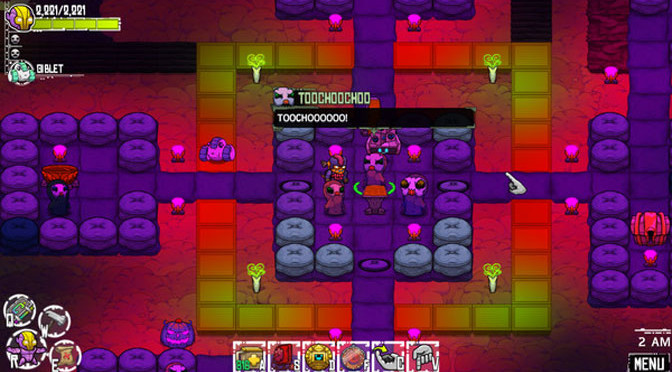 Crashing a spaceship has been the beginning of countless science fiction stories. Crashing a spaceship because a giant, floating, laser-beam-firing, purple head showed up, however, might be a first. Coupling a quirky, charming story with simple, elegant gameplay, Crashlands is the perfect marriage of the crafting and RPG genres.

Upon being attacked by the seemingly psychotic being known as Hewgodooko (also known simply as Hewgo), galactic truck driver Flux finds herself stranded on the planet Woanope with her trusty sidekick robot, JuiceBox. With her truck destroyed and deliveries scattered, Flux attempts to find a way off the planet, which is significantly less straightforward – and exponentially more amusing – than it would first seem.

There aren’t any complicated controls to memorize in Crashlands, nor are there any convoluted recipes or inventories to manage like in some crafting games. Players control Flux by selecting objects for her to interact with, knowing she’ll take the appropriate action. For instance, selecting a tree will cause Flux to pull out a saw and chop it down, with the resulting crafting materials going straight into your inventory.

Different crafting stations offer hundreds of options to create new materials, with enemies and environmental objects randomly dropping new recipes. This shifts the focus away from inventory micromanagement and instead onto the huge number of possibilities for creation the massive, procedurally generated world offers.

There’s no durability to manage with weapons or tools either, and there’s no need to worry about dealing with the issues of hunger or thirst, further keeping the focus on crafting and Crashlands’ other great component: combat.

Each crafting station provides a new set of armor and weapons for Flux, provided players have gathered enough of the right materials. But not all of that material can be acquired from the land; some of it comes from the creatures of Woanope, who really don’t like the idea of being killed.

Combat takes place in real time by selecting the enemy, which causes Flux to run up and attack. Depending on what happens, it might be a good idea to head out of the enemy’s strike range before attempting a follow-up maneuver. Players can also throw Flux’s monkey wrench to temporarily stun targets, gaining an extra edge. New crafting stations unlock additional utility weapons, allowing combat to continuously evolve throughout the game.

To keep the evolution going, Crashlands’ combat is inextricably linked to its crafting system through randomly generated stats. For instance, crafting the same sword multiple times could yield any number of variations and levels of quality, with the same rule applying to armor. Early on, it doesn’t present much of a challenge, but as rarer crafting materials become more precious and enemies get stronger, equipping the best gear becomes essential.

No matter how good your gear is, though, no one should go it alone. Fortunately, enemies occasionally drop eggs, which players can incubate to have their very own, combat-ready sidekick. Though rare, finding a pet changes the entire combat system, with each creature offering different benefits and changes to modify your fighting strategy.

Fighting and crafting aside, Crashlands’ practically begs players to go out and explore its randomly generated world. As more of the enormous map uncovers, new and exciting areas tantalize players with their unknown wealth of distinct materials, and it’s entirely possible to wander aimlessly without ever completing a quest – and to be perfectly happy doing it.

New areas are made even more lively through the game’s brilliant artwork and aesthetic elements. Splashes of color adorn ever spot of Woanope’s environments, with unique character designs seemingly leaping off the screen.

Navigating from place to place couldn’t be any easier in Crashlands either. Practically non-existent load times and near instantaneous fast-travel allow players to move around the huge map with ease, giving exploration a freedom most other crafting games don’t offer.

With a charming soundtrack and spot-on audio for items and characters, Crashlands’ sound meshes beautifully with its artwork.

Crashlands takes everything that’s fun about video games and boils it down into a system of elegant mechanics. At the same time, it also gives players a mountain of content to go through, constantly showing off its novel gameplay. Put another way, Crashlands is a game that you’ll sit down to play for 20 minutes and find yourself looking at the clock two hours later.

Crashlands delivers in every way, ticking all the boxes for what a great game should be. For that reason, it earns a perfect 5 GiN Gems out of 5.

Editor’s Note: Check out our industry interview with the developers (and brothers) of Crashlands on how they made this game while one of them was fighting cancer.