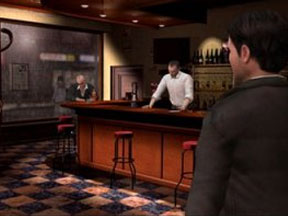 Overclocked: A History
of Violence

I tend to go on and on about how games often parallel the movies, and nowhere is that fact seen more plainly than in your standard point-and-click adventure/puzzle PC game.

The latest of these to pass through my drive was Overclocked: A History of Violence, and while I was pleased with some parts of the game, there were others that left me wanting more.

The tale kicks off with David McNamara, a US Government psychiatrist who has been commissioned to oversee a group of five Posttraumatic Stress Disorder mental patients. As McNamara begins to gather pieces of their past week through a regression-styled memory therapy, he sees that these young, mentally traumatized individuals are all linked in some way, and armed with his trusty PDA, he sets off on a course to find out exactly what is going on.

Outside of this main story, McNamara is also going through some domestic problems with his wife and best friend. There is dark history afoot, and we as the audience are only left to wonder what in the world is unfolding before us.

With so much going on in terms of varying plotlines, one might think that Overclocked is overloaded, but this couldn’t be further from the truth. The lines are well defined and work with each other to create a thoughtful story, which is about as much as one can ask.

The good with this game comes with the detail that was put into the environment. Set in New York City during an epochal storm, developer House of Tales has really outdone themselves and made a very pretty, very dreary, very rich game. All the environments appear marvelous on the screen, and the characters themselves don’t look or move half bad, either.

The sounds design of Overclocked is also noteworthy, and helps to create a creepy, brooding mood throughout.

While the look and audio of the game are the highpoints of Overclocked, there are a number of downsides as well.

The voice acting is simply terrible. When a 20-something goofball is in danger of losing his life, he shouldn’t sound like he’s ordering a burger at his nearest fast food restaurant.

The lack of emotional voice acting is only half the battle here. On top of this, there are also problematic issues with the script’s dialogue. Never should the words "My goodness" be coming out of the mouth of a frightened person unless they are very old and very proper throughout the game. It’s instances like these that cause the party to stop with this title, leaving you to shout, "Come on, House of Tales! You’ve got an M rating, roll with it!"

The only character that seemed on his mark in terms of voice acting was Mr. Flynn, the trusty desk clerk at McNamara’s hotel, but then, he really didn’t have to work hard to get beyond snooty English butler typecast during the entire game.

Beyond the characters’ choice of dialogue, the game also falls back on stereotypes, such as the idea that everyone in NYC are complete jerks and never helpful.

But as numerous as these problems may seem, Overclocked is saved with its sense of direction, both visually and thematically. Also, the puzzles that you must solve in order to advance are interesting in their execution.

As McNamara, the use of the PDA throughout the game as a voice recorder, phone, and text messenger serves as a fun gadget to play with, and launches the interactivity in a promising direction.

Since the main story is told mostly through these patient flashbacks, as McNamara you must use session recordings and various tricks to get the patients to become cooperative, and while this can often have you going through a number of session logs with a single patient, the story itself becomes more cohesive in the attempts.

As any of the five patients during their flash backs, the puzzles range from quick and simple to involved and intricate; an overall pleasant mix.

So laugh at the downfalls and revel in the upsides. There are plenty of both in this game, but all work toward a solid playing experience and prove endearing toward the overall attempt. Keeping that in mind, I really enjoyed this game, and I’ve got no problem with putting Overclocked over the halfway mark and giving it a 3.5 rating.