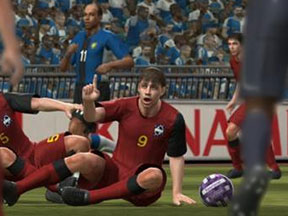 Let me start by saying that you will find no bigger soccer fan than I. I live, breathe, and eat the sport. I’ve missed class on multiple occasions to see Manchester United play, and can rarely go a day without playing a quick match of Pro Evolution Soccer. Pro Evolution Soccer, or PES for short, has been the premier soccer game on the market for years now, progressively taking small steps forward with each new installment. Unfortunately, with the release of PES 2008, Konami’s small step forward occurred at the edge of a cliff.

Before I can start the review, there is a bit of history that you must know. The two largest soccer games available are Pro Evolution Soccer, developed by Konami, and the FIFA series, developed by Electronic Arts. Each year the two battle it out for supremacy, with EA’s title usually getting better marks for presentation, while Konami’s offering gets a better review in overall gameplay. This year was no different; however, the gap between the two has been significantly closed.

Any fan of the beautiful game knows that one play cannot do it alone. This is where the first problem of PES 2008 becomes evident. It is possible to take a player and run the entire length of the field. If using a superstar, like Cristiano Ronaldo or Ronaldinho, it is virtually impossible to be stopped. This takes a lot of fun out of the game, making passing off to teammates and crossing the ball into the box irrelevant at times.

The problem of players running rampant is further compounded by the defenses seeming inability to do anything. Players will stand in the path of a player running with the ball, only to be blown past without a chance of making a play. Now, I was never very good in physics, but the last time I checked, two solid objects cannot pass through one another without some kind of collision.

Adding to the problem of horrible defense is the A.I. Often times, players will simply stand around as your opponents put the ball into the back of the net. Even if you have the button pressed down to tell your computer-controlled players to help out, they more often than not just stand idly watching as you frantically scramble around.

Further adding to the defensive conundrum of the game is the fact that aerial balls are seemingly won and lost at random. That means that corner kicks, set pieces, and crosses into the box can result in a goal with little to no influence from the person playing the game. And while players can be positioned manually, the controls are so haphazard that you’re more likely to move your player away from the ball than you are to move him to it.

The bad A.I. doesn’t stop with defensive positioning, though. When playing a through ball (a pass ahead of a player), the player running to the ball often decides to move at a trot. This usually results in the ball running so far away from him that the defender has no trouble taking the ball away. Again, it is possible to take manual control of a player, but the controls are not well-worked, and you will once again be moving your player away from the ball more often than not.

For the first time since its conception, Pro Evolution Soccer’s gameplay has failed to live up to its reputation of excellence. Ironically, what saves it from getting a terrible review is what it is usually criticized for: presentation.

PES 2008 receives a much needed face lift. Players look like their real-life counterparts in a much more detailed way than in previous years. The animations of players running and shooting have also been greatly improved, making for a more authentic looking experience. The camera does present a problem, though. I was forced to change the camera to a wide view since the default one only lets you see only a small portion of the field.

While the players look great and uniforms are recreated nicely, there is, of course, a recurring problem. As is the case in almost all PES games, only two English Premier League teams are licensed: Tottenham and Newcastle. All other teams must be renamed and their uniforms are simply generic ones created by Konami. In addition, there are no real stadiums to speak of. Ultimately, what Konami did with the visuals was nice, but they skimped on so much that what they did do seems pointless.

Complementing the graphics, the in-game commentary has also been improved, helping to bring life to the games. Sadly, the commentators still suffer from poorly timed lines. I don’t like being told to improve my game when I just scored four goals in less than 10 minutes. Also hurting the audio score is the selection of music. PES has never been known for its soundtrack, and this year is no exception.

In terms of features, the Master League is back in all its glory, allowing players take the team of their choice to the top of the world rankings. For the first time, players are able to create leagues with 20 teams, as opposed to the 16-team leagues in previous installments.

Another feature of the game is online play, mainly on the PS3 and Xbox 360 versions of the game. Konami dropped the ball with this feature, however. The lag online is bad to the point of being unplayable. The ball regularly will be at one end of the field, only to be in the back of your net the next moment.

To sum it all up, Pro Evolution Soccer 2008 is a scant offering compared to what Konami usually gives us. While they have been able to get away with offering small improvements each year, EA’s FIFA series has closed the gap significantly, meaning the pressure is on for Konami to create their best game yet next year. Pro Evolution Soccer 2008 gets 3 GiN Gems out of 5 for delivering a game that does not live up to its namesake.